The British Indian Ocean Territory (BIOT) or Chagos Islands is an overseas territory of the United Kingdom situated in the Indian Ocean, halfway between Africa and Indonesia. The territory comprises the six atolls of the Chagos Archipelago (Phehandweep फेहंद्वीप in Hindi and other North Indian languages, Paeikaana Theevukal பேகான தீவுகள் in Tamil, Feyhandheebu ފޭހަންދީބު in Dhivehi) with over 1,000 individual islands (many tiny) having a total land area of 60 square kilometres (23 sq mi).[5]

The largest island is Diego Garcia (area 44 km2), the site of a joint military facility of the United Kingdom and the United States. Following the eviction of the native population (Chagossians) in the 1960s, the only inhabitants are US and British military personnel and associated contractors, who collectively number around 4,000 (2004 figures).[5]

Maldivian mariners knew the Chagos Islands well.[6] In Maldivian lore they are known as Fōlhavahi or Hollhavai (the latter name in the closer Southern Maldives). According to Southern Maldivian oral tradition, traders and fishermen were occasionally lost at sea and got stranded in one of the islands of the Chagos. Eventually they were rescued and brought back home. However, these islands were judged to be too far away from the Maldives to be settled permanently by them. Thus for many centuries the Chagos were ignored by their northern neighbours.

The islands of Chagos Archipelago were charted by Vasco da Gama in the early sixteenth century, then claimed in the eighteenth century by France as a possession of Mauritius. They were first settled in the 18th century, by African slaves and Indian labourers brought by Franco-Mauritians to found coconut plantations.[7] In 1810, Mauritius was captured by the United Kingdom, and France ceded the territory in the Treaty of Paris.

In 1965, the United Kingdom split the Chagos Archipelago from Mauritius, and the islands of Aldabra, Farquhar and Desroches (Des Roches) from the Seychelles, to form the British Indian Ocean Territory. The purpose was to allow the construction of military facilities for the mutual benefit of the United Kingdom and the United States. The islands were formally established as an overseas territory of the United Kingdom on 8 November 1965. On 23 June 1976, Aldabra, Farquhar and Desroches were returned to Seychelles as a result of its attaining independence. Subsequently, BIOT has consisted only of the six main island groups comprising the Chagos Archipelago.

In 1966, the British government purchased the privately owned copra plantations and closed them down. Over the next five years, the British authorities forcibly and clandestinely removed the entire population of about 2,000 people, known as Chagossians (or Ilois), from Diego Garcia and two other Chagos atolls, Peros Banhos and Salomon, to Mauritius[8] (see Depopulation of Diego Garcia). In 1971, the United Kingdom and the United States signed a treaty, leasing the island of Diego Garcia to the American military for the purposes of building a large air and naval base on the Island. The deal was important to the United Kingdom, as the United States agreed to give them a substantial discount on the purchase of Polaris nuclear missiles in return for the use of the islands as a base[citation needed]. The strategic location of the island was also significant at the centre of the Indian Ocean, and to counter any Soviet threat in the region. 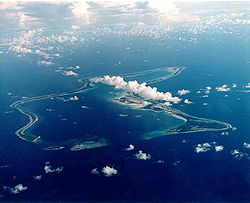 Work on the military base commenced in 1971, with a large airbase with several long range runways constructed, as well as a harbour suitable for large naval vessels. Although classed as a joint UK/US base, in practice it is mainly staffed by the American military, although a British garrison is maintained at all times, and Royal Air Force long range patrol aircraft are deployed there. The United States Air Force used the base during the 1991 Gulf War and the 2001 war in Afghanistan, as well as the 2003 Iraq War.

During the 1980s[year needed], Mauritius asserted a claim to sovereignty for the territory, citing the 1965 separation as illegal under international law, despite their apparent agreement at the time. The UK does not recognise Mauritius' claim, but has agreed to cede the territory to Mauritius when it is no longer required for defence purposes.[9] The Seychelles also launched a sovereignty claim on several of the islands.[which?][when?]

The islanders, who now reside in Mauritius and the Seychelles, have continually asserted their right to return to Diego Garcia, winning important legal victories in the English High Court in 2000, 2006 and 2007. However, in the High Court and Court of Appeal in 2003 and 2004, the islanders' application for further compensation on top of the £14.5 million value package of compensation they had already received was dismissed by the court.

On 11 May 2006, the High Court ruled that a 2004 Order in Council preventing the Chagossians' resettlement of the islands was unlawful, and consequently that the Chagossians were entitled to return to the outer islands of the Chagos Archipelago.[10] On 23 May 2007, this was confirmed by the Court of Appeal.[11] In a visit sponsored by the British government, the islanders visited Diego Garcia and other islands on 3 April 2006 for humanitarian purposes, including the tending of the graves of their ancestors.[12] On 22 October 2008, the British government won an appeal to the House of Lords regarding the royal prerogative used to continue excluding the Chagossians from their homeland.[13][14] 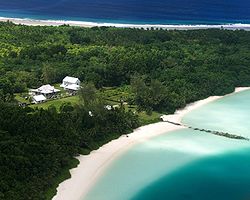 As a territory of the United Kingdom, the head of state is Queen Elizabeth II. There is no Governor appointed to represent the Queen on the territory, as there are no longer any native inhabitants. The head of government is the Commissioner, currently Colin Roberts (since July 2008,[2] replacing Leigh Turner) and Administrator John McManus (since April 2011,[2] replacing Joanne Yeadon), all of whom reside in the United Kingdom. The Commissioner's representative in the territory is the officer commanding the detachment of British forces.

According to a WikiLeaks disclosure documents[15], in a calculated move in 2009 to prevent re-settlement of the BIOT by native Chagossians, the UK proposed that the BIOT become a "marine reserve" with the aim of preventing the former inhabitants from returning to their lands. The summary of the diplomatic cable is as follows:

HMG would like to establish a “marine park” or “reserve” providing comprehensive environmental protection to the reefs and waters of the British Indian Ocean Territory (BIOT), a senior Foreign and Commonwealth Office (FCO) official informed Polcouns on May 12. The official insisted that the establishment of a marine park -- the world’s largest -- would in no way impinge on USG use of the BIOT, including Diego Garcia, for military purposes. He agreed that the UK and U.S. should carefully negotiate the details of the marine reserve to assure that U.S. interests were safeguarded and the strategic value of BIOT was upheld. He said that the BIOT’s former inhabitants would find it difficult, if not impossible, to pursue their claim for resettlement on the islands if the entire Chagos Archipelago were a marine reserve.

British Indian Ocean Territory (B.I.O.T.) prior to Seychelles independence in 1976. The land at bottom left is the northern tip of Madagascar. (Desroches is not labelled, but is a part of the Amirante Islands.) 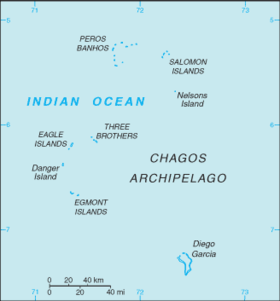 The territory is an archipelago of 55 islands,[2] the largest being Diego Garcia, accounting for almost three-quarters of the total land area of the territory, which is 60 km². The terrain is flat and low, with most areas not exceeding 2 metres above sea level. The climate is tropical marine; hot, humid, and moderated by trade winds.

With the exception of one two-lane motorway,[clarification needed] most of the islands in the territory have no roads of any sort. Diego Garcia has a short stretch of paved road between the port and airfield; otherwise transport is mostly by bicycle.

Diego Garcia's military base is home to the territory's only airport. At 3000 metres long, it is capable of supporting very heavy USAF bombers like the B-52 and the Space Shuttle in the event of a mission abort. It also has a major seaport.

The total population was reported at 4,000 in 2006, of whom 2,200 were American military personnel or contractors, 1,400 were Filipino contract workers, 300 were Mauritian contract workers, and 100 were members of the British Armed Forces.[16] It is believed the population has significantly decreased since the end of US bombing operations from the island in August 2006.

All economic activity is concentrated on Diego Garcia, where joint Anglo-American defence facilities are located. Approximately 2,000 native inhabitants, known as the Chagossians or Ilois, were forcibly relocated to Mauritius before construction of these facilities; in 1995, there were approximately 1,700 UK and US military personnel and 1,500 civilian contractors living on the island.

Construction projects and various services needed to support the military installations are carried out by military and contract employees from Britain, Mauritius, the Philippines, and the US. There are no industrial or agricultural activities on the islands. The licensing of commercial fishing provides an annual income of about $1 million for the territory.[17]

Separate telephone facilities for military and public needs are available, providing all standard commercial telephone services, including connection to the Internet. International telephone service is carried by communications satellite. The territory has three radio broadcast stations, one AM and two FM, and one television broadcast station. Because of its equatorial location,[clarification needed] Diego Garcia can use geosynchronous satellites over the Indian Ocean and also some over the eastern Atlantic Ocean. Amateur radio operations occur from Diego Garcia, using the British callsign prefix VQ9.

Postage stamps have been issued for British Indian Ocean Territory since 17 January 1968. Since the territory was originally part of the Seychelles, these stamps were denominated in rupees until 1992. However, after 1992 they became denominated in pounds sterling which is the official currency of the territory.[citation needed]