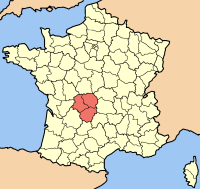 The modern region of Limousin is essentially composed of two historical French provinces:

* Limousin: the department in its entirety and the central and southeastern part of . The old province of Limousin is entirely contained inside the modern Limousin region.

* Marche: most of the department and the north of the . The old province of Marche is almost entirely contained inside the current Limousin region, with only a small part of Marche being now in the Centre region.

Beside these two main provinces, Limousin is also composed of small parts of other former provinces:

With a slowly rising population of just under 750,000, Limousin is the second least populated French region in after . There are fewer inhabitants in Limousin than in the city of .

Limousin is an essentially rural region. Famed for some of the best beef farming in the world, herds of Limousin cattle—a distinctive chestnut red—are a common sight in the region. In addition to cattle, the region is also a major timber producing area.

Due to its rural locality it is also famed for their , so prized for its distinct characters and flavors in wine fermentation that only has exclusive rights to their oak orchards. It is a partnership that is over 100 years old.

The regional capital, Limoges, was once an industrial power-base, world-renowned for its and is still a leader and innovator in electric equipment factories (which used porcelain as an insulator originally). However, large factories are now few in number.

Corrèze is the department of the former President of France, , and home to (first secretary of the Socialist Party).

The Limousin region is almost entirely an upland area. The lowest land is in the north-west of the region (approximately 250 m above sea level) and the highest land is roughly in the south-east (approximately 1000 m above sea level). However, the greater part of the region is above 350 m. There are numerous important rivers in the Limousin such as the Dordogne, Vienne, Creuse and Cher. The region is well-known for the high-quality of its water and for offering first rate fishing.

Although summer temperatures often exceed 32 °C – and have even reached 42 °C – the Limousin region has a damper and milder climate than its neighbours. Winters are often long and cold, especially in the higher areas, and snow is not at all uncommon.

The area around Brive in the Corrèze has more than 2000 hours per year of sunshine, the same as the southern city of .

Until the 1970s, Occitan was the primary language of rural areas. There remain several different Occitan dialects in use in Limousin, although their use is rapidly declining:

The authors Jean Blanzat and were both born in , in the Haute-Vienne. The artist was born in the Limousin and British artist is now based there. was born in , .

* [http://limousin.wikidot.com Information site for the English community in Limousin]
* [http://www.offrench.net/photos/gallery-9.php Photos from Limousin]