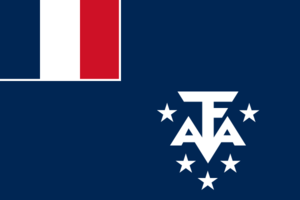 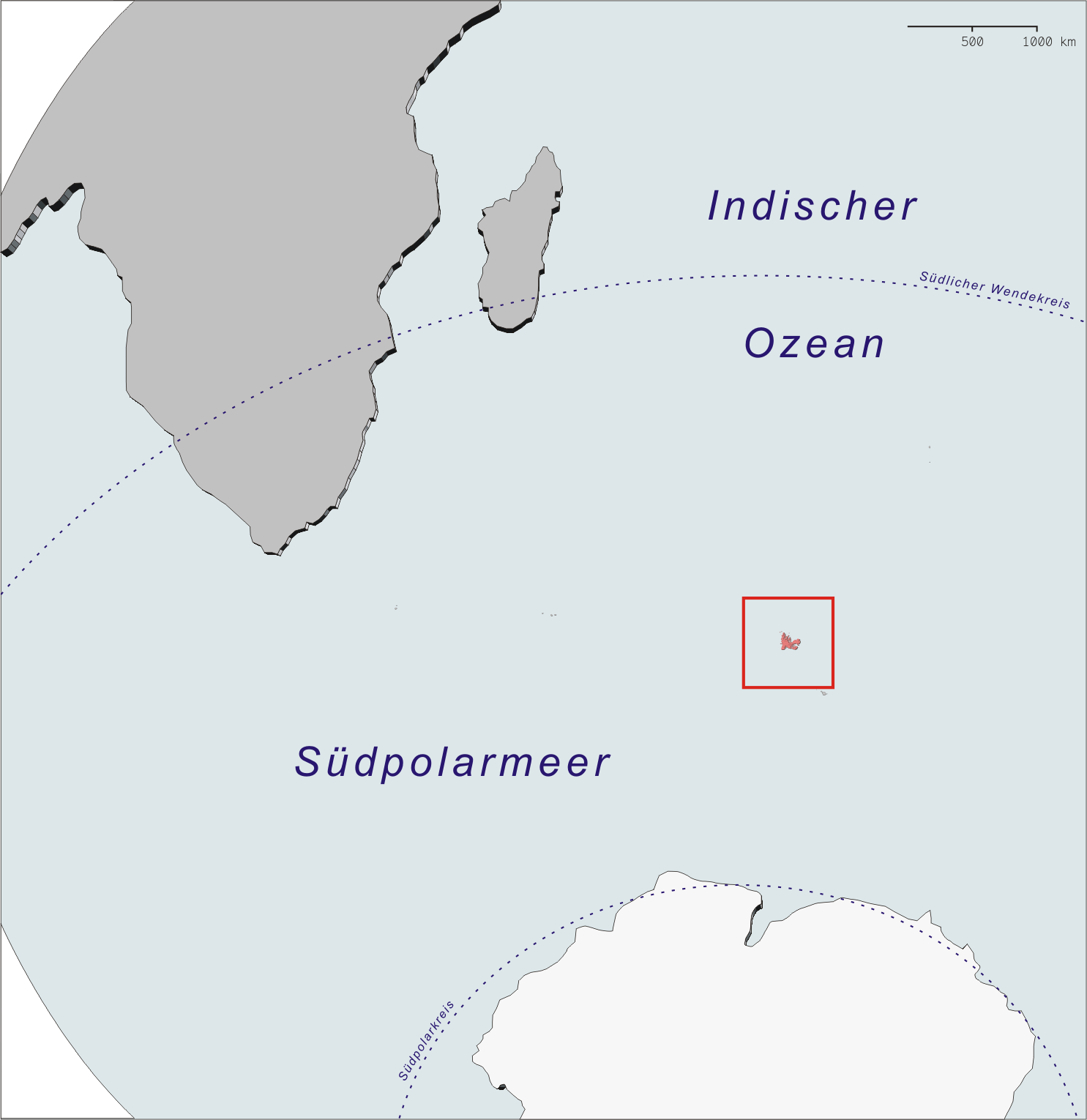 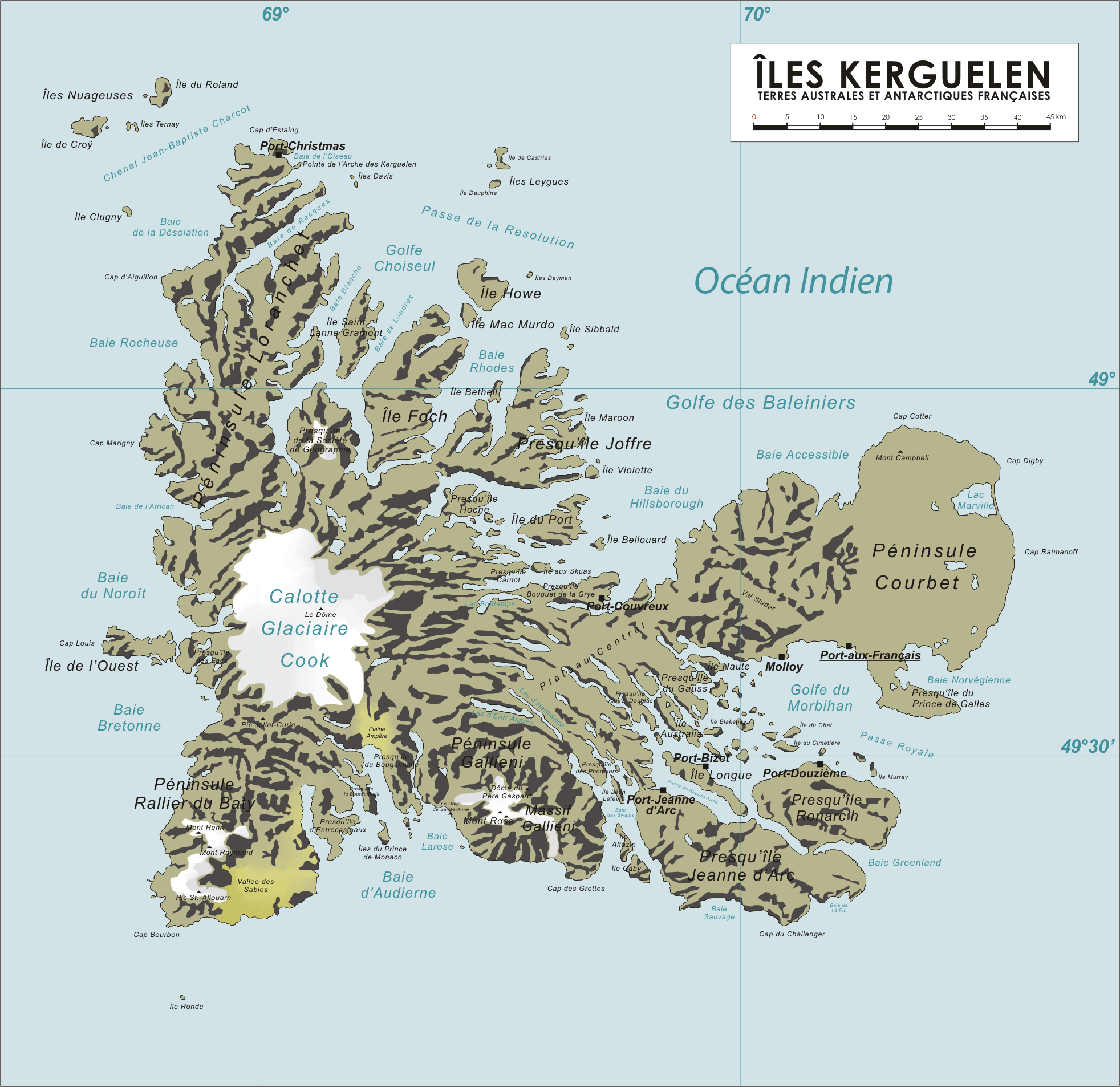 The Kerguelen Islands are located at coord|49|15|S|69|35|E|name=Kerguelen Islands, which is antipodal to the area where , , and meet in . The main island, Grande Terre, is 6,675 km² and it is surrounded by another 300 smaller islands and islets, forming an of 7,215 km². The climate is raw and chilly but not severely cold throughout the year - much like that of the outer of - with frequent high winds, and while the surrounding seas are generally rough, they remain ice-free year-round.

In English, "Kerguelen" is pron-en|ˈkɝːɡɨlɨn.

The islands, along with "Adélie Land", the "Crozet Islands", and the "Amsterdam and Saint Paul Islands" are part of the and are administered as a separate district.

They were discovered by the French navigator in February 1772.

Soon after their discovery, this archipelago was regularly visited by whalers and sealers (mostly British, American, and Norwegian) who hunted the resident populations of whales and seals to the point of near extinction, including s in the 18th century and s in the 19th century. Since the end of the whaling and sealing era, most of the islands' species have been able to re-establish themselves.

In the past, a number of expeditions briefly visited the islands, including that of Captain in 1776. The called at Kerguelen during December 1940. During their stay the crew performed maintenance and replenished their water supplies. This ship's first fatality of the war occurred when a sailor fell while painting the funnel. He is buried in what is sometimes referred to as "the most southerly German grave" of the .

Kerguelen has been used by a small number of science teams since 1949, with a population of fifty to one hundred frequently present. There is also a French tracking station. The main island is the home of a well-established population, descended from ships' cats. They survive on sea birds and the s that were introduced to the islands. There is also a population of feral from when sheep-raising was attempted here. The islands are also known for the indigenous, edible , a good source of to ancient s. It was frequently served with corned beef.

The main base, the so-called "capital" of the islands, is located at the eastern end of the "Gulf of Morbihan" on Grande Terre island at coord|49|21|S|70|13|E|name=Port-aux-Français, and it is known as . Facilities there include scientific-research buildings, a satellite tracking station, dormitories, a hospital, a library, a gymnasium, a pub, and the chapel of "".

In 2000, one of the men wintering-over was killed in a hunting accident on Ile Haute, an event written about by a British journalist, , during a stay while writing a news column on the islands. [ [http://www.times-archive.co.uk/onlinespecials/features/parris/ Matthew Parris's account of stay on Kergulen in 2000, Times (London)] ]

The main island of this archipelago is called La Grande Terre. It measures 150 km east to west and 120 km north to south. The highest point is the Galliéni Massif (Pic du Grand-Ross), which lies along the southern coast of the island and has an elevation of 1850 meters. The Cook Glacier, which covers approximately 550 square km, lies on the west-central part of the island. Grande Terre has numerous bays, inlets, fjords, and coves, as well as several peninsulas and promontories. The most important ones are listed below and indicated on the map by numbers:
#
#
#Péninsule Gallieni
#Péninsule Loranchet
#Presqu'île Jeanne d'Arc
#
#Presqu'île de la Société de Géographie
#Presqu'île Joffre
#Presqu'île du Prince de Galles
#Presqu'île du Gauss
#Presqu'île Bouquet de la Grye
#Presqu'île d'Entrecasteaux
#Presqu'île du Bougainville
#Presqu'île Hoche

There are also a number of notable localities, all on Grande Terre (see also the main map):
* Anse Betsy [Betsy Cove] (a former geomagnetic station at coord|49|10|S|70|13|E|name=Anse Betsy), on Baie Accessible [Accessible Bay] , on the north coast of the Courbet Peninsula. On this site an astronomical and geomagnetic observatory was erected on 26 October 1874 by a German research expedition led by . The primary goal of this station was the 1874 observation of the .
* Armor (Base Armor), established in 1983 forty kilometers west of Port-aux-Français at the bottom of Morbihan Gulf, for the acclimatization of salmon to the Kerguelen islands [http://books.google.com/books?id=f8LOJpFeEXQC&pg=PA90&dq=Base+Armor+Kerguelen&lr=&num=100&as_brr=0&hl=de&sig=U2oCyGV35Cx2x61xLYOJwY1JUi8]
* Baie de l'Observatoire [Observatory Bay] (a former geomagnetic observation station at coord|49|21|S|70|12|E|name=Baie de l'Observatoire), just west of Port-Aux-Français, on the eastern fringe of the Central Plateau, along the northern shore of the Golfe du Morbihan.

For the 1874 , at the of the organized and equipped five expeditions to different parts of the world. Three of these were sent to the Kerguelen Islands. The Reverend led the British expeditions to the Kerguelen Islands. He set up his main observation station at Observatory Bay and two auxiliary stations, one at Thumb Peak [49°31'11".8 S, 70°10'18".1 E] led by Sommerville Goodridge, and the second at Supply Bay [49°30'47".3 S, 69 °46'13".2 E] led by Cyril Corbet. Observatory Bay was also used by the German Antarctic Expedition led by in 1902-03. In January 2007, an archaeological excavation of this site was carried out.
* Cabane Port-Raymond (scientific camp at coord|49|20|S|69|49|E|name=Cabane Port-Raymond), at the head of a fjord cutting into the Courbet Peninsula from the south.
* Cap Ratmanoff (geomagnetic station at coord|49|14|S|70|34|E|name=Cap Ratmanoff), the eastmost point of the Kerguelens.
* La Montjoie (scientific camp at coord|48|59|S|68|50|E|name=La Montjoie), on the south shore of Baie Rocheuse, along the northwestern coast of the archipelago.
* Molloy (Pointe Molloy), a former observatory ten kilometers west of the present-day Port-Aux-Français, along the south coast of the Courbet Peninsula, or northern shore of the Golfe du Morbihan (Kerguelen). An American expedition led by G. P. Ryan erected a station at this site on 7 September 1874. That station was also established to observe the 1874 transit of Venus.
* Port (seismographic station at coord|49|31|12|S|69|54|36|E|name=Port Bizet), on the northeastern coast of Île Longue. This also serves as the principal sheep farm for the island's resident flock of Bizet .
* Port Christmas (a former geomagnetic station at coord|48|41|S|69|03|E|name=Port Christmas), on Baie de l'Oiseau, in the extreme northwest of the Loranchet Peninsula. This place was so named by Captain , who re-discovered the islands and who anchored there on Christmas Day, 1776. This is also the place where Captain Cook coined the name "Desolation Islands" in reference to what he saw as a sterile landscape.
* Port Couvreux (a former whaling station, experimental sheep farm, and geomagnetic station, at coord|49|17|S|69|42|E|name=Port Couvreux), on Baie du Hillsborough, on the southeast coast of Presqu'île Bouquet de la Grye. Starting in 1912, sheep were raise here to create an economic base for future settlement, however, the attempt failed and the last inhabitants had to be evacuated, and the station abandoned, in 1931. The huts remain as well as a graveyard with five anonymous graves. These are those of the settlers who were unable to survive in the harsh environment.
* Port Curieuse (a harbor on the west coast across Île de l'Ouest coord|49|22|S|68|48|E|name=Port Curieuse). The site was named after the ship La Curieuse, which was used by Raymond Rallier du Baty on his second visit to the islands (1913-14).
* Port Douzième (literally Twelfth Port, a hut and former geomagnetic station at coord|49|31|S|70|09|E|name=Port Douzième), on the north coast of Presqu'île Ronarch, southern shore of the Golfe du Morbihan.
* Port Jeanne d'Arc (a former whaling station founded by a Norwegian whaling company in 1908, and a former geomagnetic station at coord|49|33|S|69|49|E|name=Port Douzième), in the northwestern corner of Presqu'île Jeanne d'Arc, looking across the Buenos Aires passage to Île Longue (4 km northeast). The derelict settlement consists of four residential buildings with wooden walls and tin roofs, and a barn. One of the buildings was restored in 1977, and another in 2007.

The former sounding rocket range to the east of Port-aux-Français coord|49|21|S|70|16|E|name=FUSOV is currently the site of a radar.

Since 1992, the French (CNES) has operated a and which is located four kilometers east of . There was a need for a tracking station in the , and the French government required that it be located on French territory, rather than in a populated, foreign place like Australia or New Zealand.

activities are limited to raising sheep (approximately 3500 Bizet - an endangered species in metropolitan France) on Longue Island for consumption by the occupants of the base, as well as small quantities of vegetables in a greenhouse within the immediate vicinity of the main French base. There are also feral rabbits and sheep that can be hunted, and wild birds.

There are also some fishing boats and vessels, owned by fishermen on - a "department" of France - who are licensed to fish within the archipelago's .

The Kerguelen islands form an emerged part of the submerged Kerguelen-Heard , which has a surface area nearing 2.2 million square kilometres. [ [http://t-extreme.ifrance.com/extreme/extreme5/plateau_k.htm article by Roland Shlich (Research Manager at the )] ]

The major part of the volcanic formations visible on the islands are characteristic of an effusive volcanism, which caused a formation to start emerging above the level of the ocean 35 million years ago. The accumulation is of a considerable amount; flows, each with a thickness of three to ten meters, stack on top of each other, sometimes up to a depth of 1,200 metres. This form of volcanism creates a monumental relief shaped as stairs of pyramids.

Other forms of volcanism are present locally, such as the strombolic volcano , and the volcano-plutonic complex on the Rallier du Baty peninsula. Various veins and extrusions of lava such as s, trachy-phonolites and s are common all over the islands.

No eruptive activity has been recorded in historic times, but some s are still active in the South-West of the Grande-Terre island.A few strata, trapped in basalt flows, reveal fossilised fragments, dated at about 14 million years of age.

Glaciation caused the depression and tipping phenomena which created the gulfs at the north and east of the archipelago. Erosion caused by the glacial and fluvial activity carved out the valleys and fjords; erosion also created conglomerate detrital complexes, and the plain of the .