To Have and Have Not (film)

To Have and Have Not (film)

Infobox Film
name = To Have and Have Not 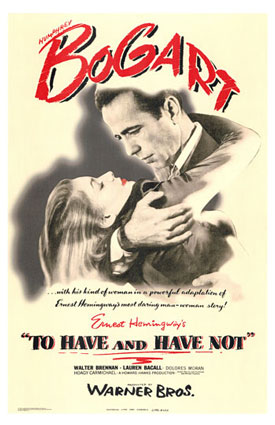 image_size =
caption = "To Have and Have Not" movie poster
director =
producer =

"To Have and Have Not" (1944) is a thriller romance war directed by and starring and that is nominally based on the novel "" by .

The film is set in under the . In this exotic location, the world-weary fishing boat captain Harry 'Steve' Morgan () is urged to help the smuggle some people onto the island. He is hesitant, until the person who had been hiring out his fishing boat gets accidentally shot. In desperation because he will not be able to recover the $825 he is owed, he ends up working with the Resistance and smuggles a husband and wife onto Martinique. Meanwhile, a romance unfolds between Harry and Marie 'Slim' Browning (), an American pickpocket who has come to the island. Throughout the movie, he has to prop up his buddy, Eddie (), a rummy who is constantly requesting drinks and is the ultimate loose-end as he stumbles from scene to scene with Bogie and Bacall.

sold the book rights to independent director . Hawks sold the rights to Warner Bros. , “out of print and broke”, was on the payroll, helping with the script. [Sperber and Lax 1997, p. 250.]

This was Lauren Bacall's first film, at the age of 19. Howard Hawks' wife "Slim" noticed Bacall on the cover of "" and showed the photo to her husband, who soon sought out Bacall and signed her for the role. After filming began, a romance developed between Bacall and Humphrey Bogart, despite the disapproval of Hawks. This romance eventually led to Bacall's first marriage and ended Bogart's marriage with , his third wife. It created a memorable onscreen chemistry between Bogart and Bacall, which would be used to advantage in several other movies, such as "The Big Sleep".

Although Hawks had a high regard for Hemingway's works in general, he considered "To Have and Have Not" his worst book, a "bunch of junk," and told Hemingway so; [Hawks telling Hemingway he could film his worst book and that this one was "a bunch of junk": interview with Hawks by Joseph McBride for the Directors' Guild of America, October 21&ndash;23, 1977, private publication of the Directors' Guild, p.21; quoted at length in Mast, p.243.]

In the movie, Bacall sings "How Little We Know" by and . Another Carmichael song, "Hong Kong Blues" (co-written with ), was also used. Carmichael plays Cricket, the piano player in the film.

Another song played in the film was "Am I Blue?", written by and .

The second film version of "", titled "The Breaking Point" (1950), was directed by and stars . It shifted the action to southern and made Garfield a former captain.

The third film version, titled "" (), was directed by and stars in the Bogart/Garfield role and in Walter Brennan's role as the alcoholic sidekick, although Sloane's interpretation was less overtly comedic than Brennan's.

*"Casablanca" (1942), another film in which Bogart plays an American trying to stay neutral while running a business in Vichy-controlled territory.