Provence-Alpes-Côte d'Azur
This article is about the region. For the traditional province, see Provence.

It is made up of:

It encompasses six departments in south-eastern France, bounded to the east by the Italian border, to the south by the Mediterranean Sea and by the principality of Monaco, to the north by Rhône-Alpes, and to the west by Languedoc-Roussillon, with the Rhône river marking its westernmost border. The six departments are:

The region logo displays the coat of arms created in the 1990s and which combines the coats of arms of the old provinces making up Provence-Alpes-Côte d'Azur.

The largest cities in the region are Marseille, Nice, Toulon, and Aix-en-Provence, each with a population exceeding 100,000 inhabitants as of the 1999 census. The richest part of the Region is Nice's metropolitan area. 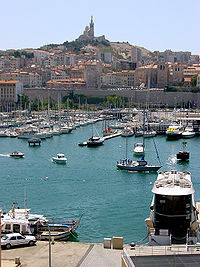