Hauts-de-Seine (92) (literally " Heights") is a "département" in . It is part of the Île-de-France region, and forms part of the western suburbs of . It is small and densely populated and contains the modern office, theatre and shopping complex known as "" with its "".

Hauts-de-Seine and two other small départements, and , form a ring around Paris, known as the "petite couronne" (i.e. "inner ring"). 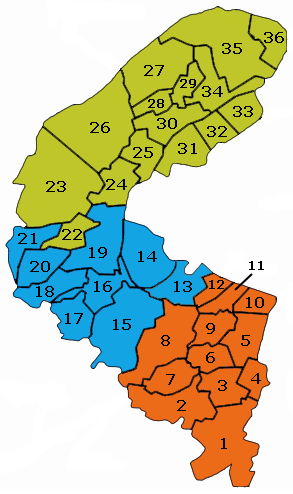 Hauts-de-Seine is made up of 3 departmental arrondissements and 36 communes:

The department of Hauts-de-Seine was created in 1968, from parts of the former départements of Seine and .

In the 1990s and early 2000s, the Hauts-de-Seine received national attention as the result of a corruption scandal concerning the misuse of public funds provided for the department's housing projects. Implicated were former minister and former of the Hauts-de-Seine, , and other personalities of the RPR party. (See .)

Hauts-de-Seine is France's second wealthiest département (behind Paris) and one of 's richest areas. Its per capita was € 62,374 in 2003, according to official figures.