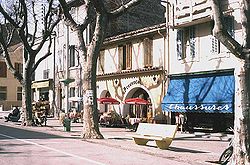 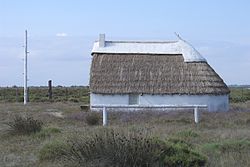 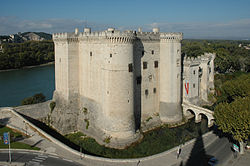 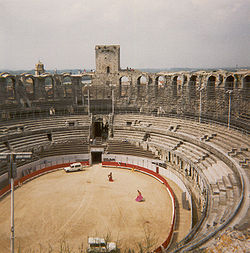 Bouches-du-Rhône (French pronunciation: [buʃ.dy.ʁon]; Occitan: Bocas de Ròse, lit. "Mouths of the Rhône") is a department in the south of France named after the mouth of the Rhône River. It is the most populous department of the Provence-Alpes-Côte d'Azur region. Its INSEE and postal code is 13.

History of the department

Bouches-du-Rhône is one of the original 83 departments created during the French Revolution on 4 March 1790. It was created from the western part of the former province of Provence and the principalities of Orange, Martigues, and Lambesc. It lost part of its territory in 1793, including Orange and Apt, when the Vaucluse department was created.

Following its creation, the department was immediately strongly and actively supportive of the French Revolution, containing 90 "Jacobin Clubs" by 1794.[1] It was also noteworthy that more than 50% of the priests in the department accepted the Civil Constitution of the Clergy which in effect subordinated the church to the government.[2] During the ascendancy of the Communist Party in the twentieth century election results indicated that support for left-wing politics remained relatively strong in the department, and especially in the northern suburbs of Marseille.

History of the area

The history of the area is closely linked to that of Provence. Marseille has been an important harbor since before Julius Caesar's conquest of Gaul. The Roman presence has left numerous monuments across the department.

The department is part of the current region of Provence-Alpes-Côte d'Azur. It is surrounded by the departments of Gard on the west, Vaucluse on the north, and Var on the east, and by the Mediterranean Sea on the south. The Rhône River delta forms a vast swampy wetlands area called the Camargue in the southwestern part of the department.

The largest city in the department, Marseille, contains a major industrial harbor, and serves as France's largest commercial port. Bouches-du-Rhône is largely urban, with 28 towns having a population of more than 10,000 as of 2008:

The President of the General Council is Jean-Noël Guérini of the Socialist Party. Although the department leans to the right in national elections, it remains a stronghold of the left at the local level due to the very strong PS machine in the department led today by Guérini and in the past by Gaston Defferre.

The department is well represented in French art. Paul Cézanne painted numerous representations of the Mont Sainte-Victoire. Vincent van Gogh spent much of his life in Arles, painting many scenes in the area.

Bouches-du-Rhone at the Open Directory Project