As of 2003, there were discrepancies between Westerm sources regarding the population of Kazakhstan. United States government sources, including the CIA World Fact Book and the US Census Bureau International Data Base, listed the population as 15,340,533,[10] while the World Bank gave a 2002 estimate of 14,794,830.[citation needed] This discrepancy was presumably due to difficulties in measurement caused by the large migratory population in Kazakhstan, emigration, and low population density - only about 5.5 persons per km² in an area the size of Western Europe.

1 Births and deaths until 1979 are estimates.

According to the 2009 census there are two dominant ethnical groups in Kazakhstan, they are ethnic Kazakhs (63.1%) and ethnic Russians (23.7%) with a wide array of other groups represented, including Ukrainians, Uzbeks, Germans, Chechens, Koreans, and Uyghurs - that is, virtually any group that has ever come under the Russian sphere of influence. This diverse demography is due to the country's central location and its historical use by Russia as a place to send colonists, dissidents, and minority groups from its other frontiers - one can almost not understand Kazakhstan without understanding population transfer in the Soviet Union. From the 1930s until the 1950s, both Russian opposition (and such Russians "accused" of being part of the opposition) and certain minorities (esp. Volga Germans, Poles, Ukrainians, Crimean Tatars, Kalmyks) had been interned in labor camps often merely due to their heritage or beliefs, mostly on collective orders by Joseph Stalin. This makes Kazakhstan one of the few places on Earth where normally-disparate Germanic, Indo-Iranian, Koreans, Chechen, and Turkic groups live together in a rural setting and not as a result of modern immigration. Most of the population speaks Russian; only half of ethnic Kazakhs speak Kazakh fluently, although it is enjoying a renaissance. Both Kazakh and Russian languages have official status.

After the fall of the Soviet Union, the German population of Kazakhstan proceeded to emigrate en masse during the 1990s [3], as Germany is willing to repatriate them. Also much of the smaller Greek minority took the chance to repatriate to Greece, so did many Russians move to Russia. Some groups have fewer good options for emigration but because of the economic situation are also leaving at rates comparable to the rest of the former East bloc. 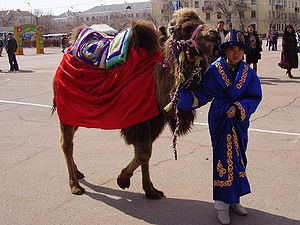 Kazakh boy with a camel in Baikonur

For current data, use these sites.