The U.S. government has estimated a population of 23.4 million persons as of July 2010, and the International Monetary Fund estimated almost 21 million persons in 2005. Yemen’s latest census, conducted in December 2004, reported a population of 19.72 million persons, reflecting an average annual population growth rate of more than 3 percent. Yemen’s population has more than doubled since 1975 and has grown approximately 35 percent since the 1994 census, making Yemen the second most populous country on the Arabian Peninsula. Adding to the growth of the native population is the influx of Somali refugees into Yemen—tens of thousands every year. According to the United Nations Refugee Agency, there were almost 96,000 African refugees in Yemen in 2006, including more than 91,000 Somalis. The Yemen government estimated 300,000 Somalis in Yemen in 2007. According to the United Nations, Yemen’s population in 2005 was 27.3 percent urban and 73.7 percent rural; population density was 40 persons per square kilometer.[1]

Yemen’s population is predominantly young. According to U.S. government and United Nations estimates, in 2007 about 46 percent of the population was under age 15; slightly more than half the population, 15–64; and less than 3 percent, 65 and older. The population was almost equally divided between males and females. In 2007 the birthrate and death rate were estimated to be 42.7 per 1,000 and 8.1 per 1,000, respectively. The infant mortality rate was almost 58 deaths per 1,000 live births. The rate was estimated to be higher for males than for females—more than 62 male deaths per 1,000 live births, as compared with about 53 female deaths per 1,000 live births. Despite an increase of 14 years in the last decade, life expectancy at birth in Yemen has remained low compared with other developing countries— 60.6 years for males and 64.5 years for females, or 62.5 years overall. The country’s fertility rate was almost 6.5 children per woman in 2007.[1]

Yemen’s population is predominantly Arab, but it also includes Afro-Arabs, South Asians, and Europeans.[1] Arabic is the official language; English is also used in official and business circles.[1] In the Mahra area (the extreme east), several non-Arabic languages (including Mehri) are spoken.[2] When the former states of north and south Yemen were established, most resident minority groups departed.[2]

Virtually all citizens of Yemen are Muslims, either belonging to the Zaydi order of Shi'a Islam (50%) or to the Shafa'i order of Sunni Islam (50%).[1] Zaydis are generally found in the north and northwest and Shafa'is in the south and southeast.[2] There are also approximately 3,000 Christians, 400 Jews, and 40 Hindus. [1]

The Yemeni diaspora is largely concentrated in the United Kingdom, where between 70,000 and 80,000 Yemenis live. Just over 10,000 Yemenis reside in the United States, and an additional 2,812 live in Italy. Other Yemenis also reside in the Gulf states (especially Saudia Arabia, the United Arab Emirates, Qatar and Bahrain), as well as Somalia, Djibouti, Eritrea, Indonesia, Malaysia, and some parts of Brunei and the former USSR.[3] 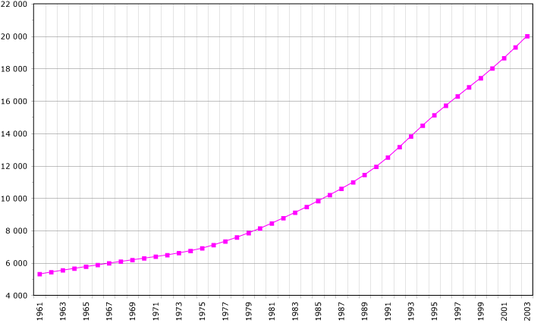 Population: thousands of inhabitants. Food and Agriculture Organization of the United Nations, 2005. Yemen has a growth rate of 3.46% (2008 est.)[4]

The following demographic statistics are from the CIA World Factbook, unless otherwise indicated.[4]