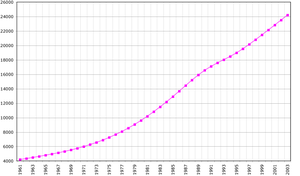 Demographics of Saudi Arabia, Data of FAO, year 2005 ; Number of inhabitants in thousands.

Saudi Arabia's population as of the April 2010 Census was 27,136,977: 18,707,576 Saudi nationals and 8,429,401 non-nationals.[1] Until the 1960s, most of the population was nomadic or seminomadic; due to rapid economic and urban growth, more than 95% of the population now is settled. Some cities and oases have densities of more than 1,000 people per square kilometer (2,600/mile²). Saudi Arabia's population is characterized by rapid growth and a large cohort of youths.

Saudi Arabia hosts one of the pillars of Islam, which obliges all Muslims to make the Hajj, or pilgrimage to Mecca, at least once during their lifetime if they are able to do so. The cultural environment in Saudi Arabia is highly conservative; the country adheres to a strict interpretation of Islamic religious law (Shari'a). Cultural presentations must conform to narrowly defined standards of ethics. Men and women are not permitted to attend public events together and are segregated in the work place.

Most Saudis are ethnically Arab of whom they immigrated as pilgrims and reside in the Hijaz region along the Red Sea coast such as Jeddah, Makkah and Madina. According to a random survey, most would-be Saudis come from the Subcontinent and Arab countries.[2] Many Arabs from nearby countries are employed in the kingdom. There also are significant numbers of Asian expatriates mostly from India, Pakistan, Afghanistan, Bangladesh, Indonesia and the Philippines.[citation needed] In the 1970s and 1980s, there was also a significant community of South Korean migrant labourers, numbering in the hundreds of thousands, but most have since returned home; the South Korean government's statistics showed only 1,200 of their nationals living in the kingdom as of 2005[update].[3][4] There are more than 100,000 Westerners in Saudi Arabia, most of whom live in private compounds in the major cities such as Riyadh, Jeddah and Dhahran. The government prohibits non-Muslims from living in the city of Mecca.

The following demographic statistics are from the CIA World Factbook, unless otherwise indicated.[5]

The Government does not conduct census on religion, but estimates put the percentage of the majority Sunni Muslims at 85-90% while Shiites, who comprise the largest Muslim minority, at 10-15% of the population.[6] Shiites (Twelvers) are primarily concentrated in the Eastern Province, where they constitute over a third of the population. Other smaller communities (Ismailis and Zaidis) reside in the South, with Ismailis constituting around half of the population of the province of Nejran, and the Holy Islamic cities of Mecca and Medina.