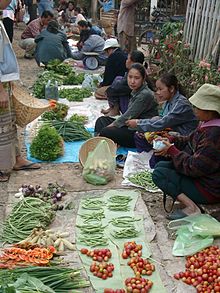 A street market in Luang Prabang.

Laos' population was estimated at about 6 million in July 2004, dispersed unevenly across the country. Most people live in valleys of the Mekong River and its tributaries. Vientiane Prefecture, which includes Vientiane, the capital and largest city of the country, had about 569,000 residents in 1999. The country's population density is 23.4/km².

Ethnic Lao, the principal lowland inhabitants and politically and culturally dominant group, make up the bulk of the Lao Loum and around 60% of the total population. The Lao are a branch of the Tai people who began migrating southward from China in the first millennium A.D. In the north, there are mountain tribes of Miao–Yao, Austro-Asiatic, Tibeto-Burman - Hmong, Yao, Akha, and Lahu who migrated into the region in the 19th century. Collectively, they are known as Lao Sung or highland Lao. In the central and southern mountains, Mon–Khmer tribes known as Lao Theung or upland Lao, predominate. Some Vietnamese and Chinese minorities remain, particularly in the towns, but many left in two waves - after independence in the late 1940s and again after 1975.

The predominant religion is Theravada Buddhism. Animism is common among the mountain tribes. Buddhism and spirit worship coexist easily. There also is a small number of Christians and Muslims.

The official and dominant language is Lao, a tonal language of the Tai linguistic group. Midslope and highland Lao speak an assortment of tribal languages. French, once common in government and commerce, has declined in usage, while knowledge of English - the language of the Association of Southeast Asian Nations (ASEAN) - has increased in recent years.

With a median age of 19.3, Laos has the youngest population of Asia. 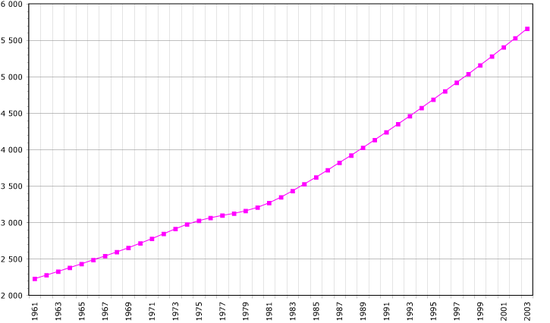 Demographics of Laos, Data of FAO, year 2005 ; Number of inhabitants in thousands. 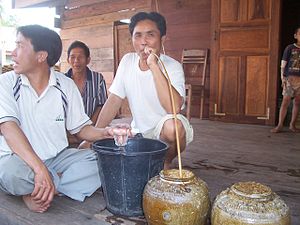 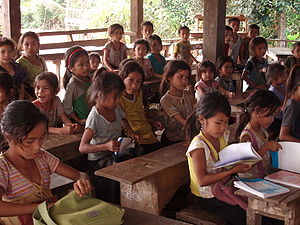 A primary school in a village in northern rural Laos 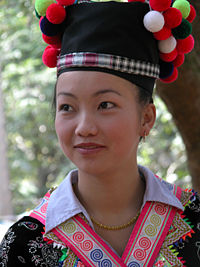 In Luang Prabang, a young woman at the time of a Hmong Meeting Festival

Specialists are largely in agreement as to the ethnolinguistic classification of the ethnic groups of Laos.[3] For the purposes of the 1995 census, the government of Laos recognized 149 ethnic groups within 47 main ethnicities.[3] whereas the Lao Front for National Construction (LFNC) recently revised the list to include 49 ethnicities consisting of over 160 ethnic groups.[3] The term ethnic minorities is used by some to classify the non-Lao ethnic groups, while the term indigenous peoples is not used by the Lao PDR.[3] These 160 ethnic groups speak a total of 82 distinct living languages.[4]