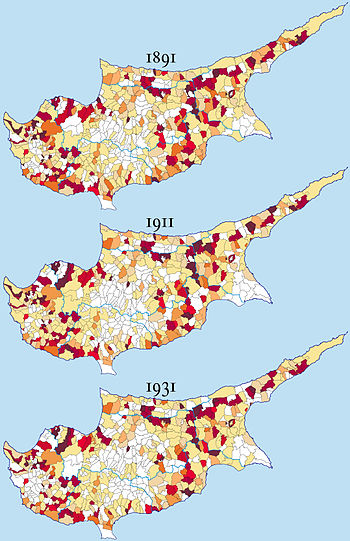 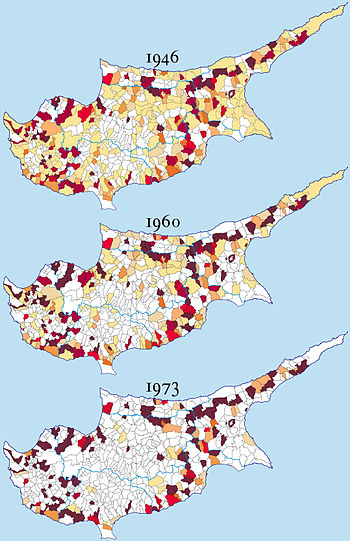 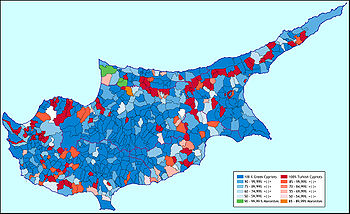 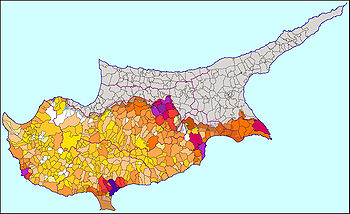 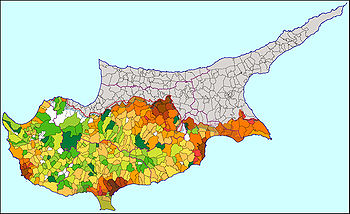 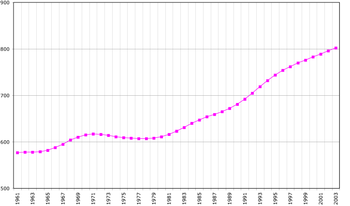 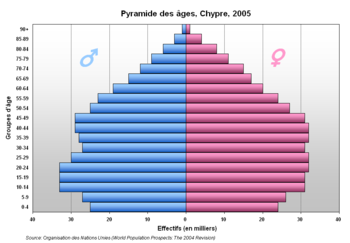 Age structure of the population of Cyprus.

1 The numbers of births and deaths 1901-1932 are estimates calculated from the birth and death rates.

Large-scale demographic changes have been caused since 1964 by the movements of peoples across the island and the later influx of settlers from Turkey to Northern Cyprus. The South has seen an influx of British and Arab (mostly Palestinian and Lebanese) immigration, as well as migrant workers from Poland, Russia, Sri Lanka, Nigeria, China and the Philippines. According to the 2007 Demographic report there were 125,300 non-Cypriot residents about 14.3% of the total population of Cyprus as stated by the Cyprus government which does not include Northern Cyprus.[3]

The demographic character of Northern Cyprus changed after the Turkish invasion in 1974 and especially during the last 10–15 years. The TRNC census carried out in April 2006 showed that out of a total population of 256,644 in Northern Cyprus, 132,635, or 52%, were Turkish Cypriots in the sense that they were born in Cyprus of at least one Cyprus-born parent (for 120,007 of these both parents were Cyprus-born). In addition, 43,062 TRNC citizens (17%) had at least one non-Cypriot Turkish-born parent, 2,334 TRNC citizens (1%) had parents born in other countries, 70,525 residents (27%) had Turkish citizenship, and 8,088 (3%) were citizens of other countries (mainly UK, Bulgaria, and Iran).[9] Based on these census data, it can be argued that 113,687 TRNC residents, or 44% of the population, are not Turkish Cypriots properly speaking, but are in fact "Turkish immigrants" or "Turkish settlers" from Anatolia. Alternative sources suggest that there are 146,122 Turkish settlers from Anatolia in TRNC (2007 figures)[10][not in citation given] and that the Turkish Cypriots in Northern Cyprus are today outnumbered by the Turkish settlers,[11] contrary to the picture presented by the 2006 TRNC census.

Almost one-third of the Turkish settlers in Northern Cyprus have been granted TRNC citizenship by the authorities of Northern Cyprus and have thus been naturalized.[12][not in citation given] Settlement in Northern Cyprus, especially if accompanied by naturalization, is a violation to the Geneva Conventions Protocol of 1977, since the Turkish occupation has been declared illegal by the UN. The Republic of Cyprus government regards these Turkish immigrants as "illegal settlers" and does not include them in the population estimates for the entire island published by the Republic of Cyprus Statistical Service.[5]

According to the 2001 census carried out in the Government controlled area,[13] 94.8% of the population are Christian Orthodox, 0.9% Armenians and Maronites, 1.5% Roman Catholics, 1.0% Church of England, and 0.6% Muslims. The remaining 1.3% adhere to other religious denominations or did not state their religion.

Cyprus has a well-developed system of primary and secondary education. The majority of Cypriots earn their higher education at Greek, Turkish, British, or American universities, while there are also sizeable emigrant communities in the United Kingdom and Australia. Private colleges and state-supported universities have been developed by both the Turkish and Greek communities.

The following demographic statistics are from the CIA World Factbook, unless otherwise indicated.[14]

Marriages of residents of Cyprus: 5,252
Total marriages (including tourists): 12,617

"The information presented here concerns only part of Cyprus, due to an absence of reliable information concerning the island as a whole".[16]

Greek and Turkish are the official languages according to Article 3 of the Constitution of Cyprus. In Northern Cyprus, the official language is Turkish (Article 2 of the 1983 Constitution of Northern Cyprus). English is widely spoken on the island, and Russian has become fairly widespread in recent years due to the influx of immigrants and investors from CIS countries.