Demographics of the Philippines

Demographics of the Philippines

The most commonly spoken language is Filipino, which is based on the Tagalog language. Filipino and English are the official languages. Additionally, there are between 120 to 170 distinct indigenous Philippine languages (depending on their classification), a dozen of which have over one million speakers and are recognized as official regional languages. Spanish and Arabic are recognized as voluntary and optional languages in the Philippine constitution.[2] Christianity is the main religion, with Roman Catholicism making up the majority of the population. Other religions include Islam, Buddhism, Hinduism, and those with no religion.[4] The people of the Philippines are known as Filipinos. Throughout the colonial era the term "Filipino" originally referred to the Spaniards, and mestizos. The definition was later applied to include all citizens, regardless of ethnic origin.

The majority of the people in the Philippines are of Austronesian descent. The largest of these groups are the Visayan, Tagalog, Ilocano, Bicolano, Moro, the Kapampangan and among others. The indigenous peoples of the Philippines form a minority of the population. Other ethnic groups include the Spaniard, Indian, Chinese, American, Japanese, Arab, and other ethnic groups from other countries.

Various degrees of interracial marriage between ethnic groups have resulted in the formation of a new ethnic group of people, collectively known as Filipino mestizos. According to a genetic research study conducted by Stanford University Asia-Pacific Research Center, about 3.6% of Filipinos have White[5] or Caucasian ancestry.

Main articles: Languages of the Philippines and Philippine languages

There are between 120 and 170 languages spoken in the country. Most of them have several varieties (dialects), totaling over 300 across the archipelago. Since the 1930s the government has promoted the use of the national language, Filipino, based on Tagalog.[6][7] Visayan languages (also called Bisaya or Binisaya) are widely spoken throughout the Visayas, and in some parts of Mindanao. The Ilokano language is the lingua franca of the Northern Luzon.

English is considered an official language for purposes of communication and instruction.[2] Consequently, it is widely spoken and understood. Other non-indigenous languages spoken are Spanish, Chinese, and Arabic.

Main article: Religion in the Philippines

About 80% of Filipinos are Roman Catholics, 5% are adherents of Islam, and 10% are Protestant Christians, Iglesia ni Cristo (Church of Christ), Philippine Independent Church, Mormon, as well as those of other religions, such as Buddhism, Hinduism, Judaism, and those with no religion form a minority of the population.

Roman Catholics and Protestants were converted during the four centuries of Western influence by Spain, and the United States. Under Spanish rule, much of the population was converted to Christianity.

Orthodox Christians also live in Philippines. Protestant Christianity arrived in the Philippines during the 20th century, introduced by American missionaries.

Islam was brought to the Sulu Archipelago in the 14th century by Makhdum Karim, an Arab trader, and to Mindanao island by Rajah Kabungsuwan, a Malaccan nobleman. From then onwards, Muslim princes carried on expeditions to propagate Islam. While Islam was easily displaced over the years among the peoples of Luzon, and the Visayas, it retained a foothold in the central parts of Mindanao and the Sulu Archipelago.

Other religions include Judaism, Mahayana Buddhism, often mixed with Taoist beliefs, Hinduism, and Sikhism. Animism and Paganism are also followed.

Education in the Philippines is based on both Western and Eastern ideology and philosophy influenced by both Spain and the United States. Filipino children enter public school at about age four, starting from nursery up to kindergarten. At about seven years of age, children enter a elementary school (6 to 7 years). This is followed by high school (4 years). Students then apply for college entrance examinations (CEE), after which they enter university (3 to 5 years). Other institutions include private school, preparatory school, international school, and science high school. School year in the Philippines starts from June, and ends in March with a two-month summer break from April to May, one week of semestral break in October, and a week or two during Christmas and New Year holidays. 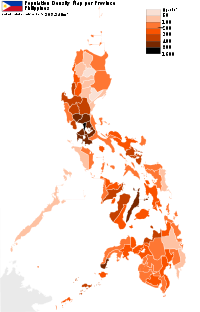 In 1903 the population of the Philippines was recounted by American authorities to fulfill Act 467. The survey yielded 7,635,426 people, including 56,138, who were foreign-born.

The Malay population divided by language

1939 This census was undertaken in conformity with Section 1 of C. A. 170. It was the first taken under the Commonwealth government with Census day on January 1. The Philippine population figure was 16,000,303.

The number of Chinese living on the island had risen to 117,000. If figures are correct, then Chinese population (including immigration) has grown significantly faster than the native population. There were also around 30,000 Japanese living in the Philippines, with some 20,000 of them residing in Davao, Mindanao, and 9,000 Americans lived in Luzon.

By then, some 27% of the population could speak English as a second language, while the number of Spanish speakers as first language had further fallen to 3% from 10-14% at the beginning of the century. In 1936, Tagalog was selected to be the basis for a national language.[8] In 1987, the Tagalog-based Filipino language was designated the national language.[7]