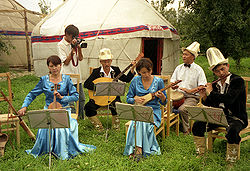 The nation's largest ethnic group are the Kyrgyz, a Turkic people, which comprise 71% of the population (2009 census). Other ethnic groups include Russians (9.0%) concentrated in the north and Uzbeks (14.5%) living in the south. Small but noticeable minorities include Tatars (1.9%), Uyghurs (1.1%), Tajiks (1.1%), Kazakhs (0.7%) and Ukrainians (0.5%), and other smaller ethnic minorities (1.7%). Of the formerly sizable Volga German community, exiled here by Joseph Stalin from their earlier homes in the Volga German Republic, most have returned to Germany, and only a few small groups remain. A small percentage of the population are also Koreans, who are the descendants of the Koreans deported in 1937 from the Soviet Far East to Central Asia.

Kyrgyzstan has undergone a pronounced change in its ethnic composition since independence. The percentage of ethnic Kyrgyz increased from around 50% in 1979 to nearly 70% in 2007, while the percentage of European ethnic groups (Russians, Ukrainians, and Germans) as well as Tatars dropped from 35% to about 10%.[1][2]

The Kyrgyz have historically been semi-nomadic herders, living in round tents called yurts and tending sheep, horses and yaks. This nomadic tradition continues to function seasonally (see transhumance) as herding families return to the high mountain pasture (or jailoo) in the summer. The retention of this nomadic heritage and the freedoms that it implies continue to have an impact on the political atmosphere in the country.

According to the 1999 census,[1] the ethnic composition of the population was as follows: Kyrgyz (Kara Kyrgyz) 64.9%, Uzbeks 13.8%, Russians 12.5%, Dungans 1.1%, Ukrainians 1%, Ugyhurs 1%, other 5.7%, including Koreans 0.4% and Germans 0.4% (among them Low German-speaking Mennonites). Most Russians, Ukrainians, Tatars, Germans, and Koreans lived in northeast, especially around the city of Karakol. Most of the Dungans and Ugyhurs are found along the Chinese border. Most of the Tajiks and Uzbeks live in the south. The emigration of non-Turkic people to Russia, Ukraine, and Germany is now negligible, in part because most of them left prior to 1999 and in part because Kyrgyzstan is the most tolerant Central Asian nation.[citation needed]

The table shows the ethnic composition of Kyrgyzstan's population according to all population censuses between 1926 and 2009. There has been a sharp decline in the European ethnic groups (Russians, Ukrainians, Germans) and also Tatars since independence (as captured in the 1989, 1999 and 2009 censuses).

In March 1996, the Kyrgyzstani legislature amended the constitution to make Russian an official language, along with Kyrgyz, in territories and work places where Russian-speaking citizens predominate.