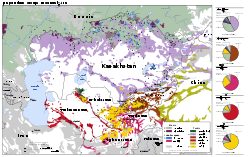 The ethnolinguistic patchwork of Central Asia in later soviet times 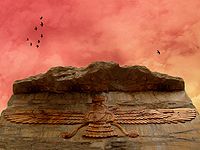 Faravahar one of the major symbols of Zoroastrianism

Central Asia is a diverse land with many ethnic groups, languages, religions and tribes. This article discusses all of the above, and includes the demographics of the nations of the five former Soviet republics: Kazakhstan, Kyrgyzstan, Turkmenistan, Tajikistan, and Uzbekistan, a group which has a total population of about 61 million. When Afghanistan, which is not always considered part of the region, is included, then Central Asia has a total population of about 90 million as of 2010.[1] Although most central Asians have belonged to religions which were introduced into the area within the last 1,500 years,[2] such as Sunni Islam, Ismaili Islam, Tengriism, and Syriac Christianity, Buddhism was introduced to Central Asia over 2,200 years ago, and Zoroastrianism, over 2,500 years ago.[3]