This article is about the demographic features of the population of Moldova, including distribution, ethnicity, languages, religious affiliation and other statistical data.

Overview of the demographic statistics 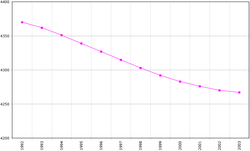 Demographics of Moldova, data of FAO, 2005; number of inhabitants in thousands.

Note: 1The breakaway Transnistrian authorities count as rural the population of the towns of Crasnoe, Maiac, and Tiraspolul Nou. Since their exact population isn't available, so does this table.

Moldova under the central government control

Moldovans are the largest ethnic group in Moldova. According to the combined data of the census in the government controlled area and the census in Transnistria in 2004 they account for 69.6% of the country's population. The proportion of Ukrainians and Russians decreased considerably in comparison to the last Soviet census in 1989: from 13.8% to 11.2% and from 13.0% to 9.4% respectively. This is mostly due to emigration. Ukrainians mostly live in the east (Transnitria) and the north, while Russians mostly live in urban areas: 27% of all Russians live in Chişinău, 18% live in Tiraspol, 11% in Bender and 6% in Bălţi. The Gagauz people are the fourth-largest ethnic group (3.8% in 2004). Most of them live in the south of Moldova in the autonomous region of Gagauzia. 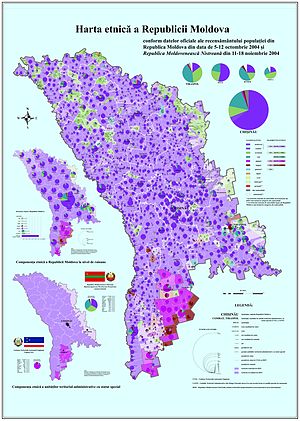 Moldova under the central government control

Ethnic composition of the main part of Moldova, according to the 2004 census, was:

Declared country of birth for the current inhabitants of the part of Moldova under the central government control, according to the 2004 census:

Population by district, according to the 2004 census:

1There is an ongoing controversy over whether Moldovans are a subset of Romanians, or a distinct ethnic group. At the 2004 Moldovan Census, citizens could declare only one nationality. Consequently, one could not declare oneself both Moldovan and Romanian.

Romanian is the official language of Moldova. In political contexts it is sometimes also called Moldovan.

First language in daily use

Usage of own language by the ethnic groups of Moldova 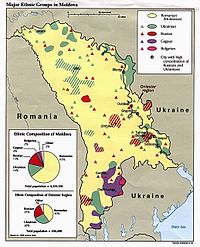 According to the 2004 census, the population of Moldova has the following religious composition:

Notes: 75,727 (2.24% of population) did not answer that question.
a Known as Creştini după Evanghelie.
b Traditionally Orthodox Lipovans.

In 1940-1941, and 1944–1991, the Soviet government strictly limited the activities of the Orthodox Church (and all religions) and at times sought to exploit it, with the ultimate goal of abolishing it and all religious activity altogether. Most Orthodox churches and monasteries in Moldova were demolished or converted to other uses, such as administrative buildings or warehouses, and clergy were sometimes punished for leading services. Still, many believers continued to practice their faith.

People in the independent Moldova have much greater religious freedom than they did in Soviet times. Legislation passed in 1992 guarantees religious freedom, but requires all religious groups to be officially recognized by the government.

In 1991, Moldova had 853 Orthodox churches and eleven Orthodox monasteries (four for monks and seven for nuns). In 1992 construction or restoration of 221 churches was underway, but clergy remained in short supply.[citation needed] As of 2004, Chistian Orthodox constitute the vast majority of the population in all districts of Moldova.

In the interwar period, the vast majority of ethnic Moldovans belonged to the Romanian Orthodox Church (Bucharest Patriarchate), but today both Romanian and Russian Orthodox Church (Moscow Patriarchate) have jurisdiction in Moldova, with the latter having more parishes. According to the local needs, liturgy is performed in Romanian, Russian, and Turkic (Gagauz). After the revival of religious activity in the last 20 years, a minority of the clergy and the faithful wanted to return to the Bucharest Patriarchate (Metropolis of Bessarabia). Because higher-level church authorities were unable to resolve the matter, Moldova now has two episcopates, one for each patriarchate. After the Soviet occupation in 1940, the Metropolis was downgraded to a Bishopric. In late 1992, the Patriarch of Moscow and All Russia issued a decree upgrading its eparchy of Chişinău and Moldova to a Metropolis.

Half of Moldova's Roman Catholics are in Chişinău, and 1/5 in Bălţi.

In addition, the Old Russian Orthodox Church (Old Believers) had fourteen churches and one monastery in Moldova in 1991.

Half of Moldova's Old Believers are in Floreşti district, and 1/5 in Sîngerei district.

Despite the Soviet government's suppression and harassment, Moldova's practicing Jews managed to retain their religious identity. About a dozen Jewish newspapers were started in the early 1990s, and religious leaders opened a synagogue in Chişinău; there were six Jewish communities of worship throughout the country. In addition, Moldova's government created the Department of Jewish Studies at Chişinău State University, mandated the opening of a Jewish high school in Chişinău, and introduced classes in Judaism in high schools in several cities. The government also provides financial support to the Society for Jewish Culture.

Other religious denominations in Moldova include:

The largest and most important of these is Chişinău, the country's capital and its most important industrial center, with a population of 712,218 in 2004. The city's population is 72.11% Moldovan (Romanian), 13.92% Russian, 8.28% Ukrainian, and 5.69% others (Bulganians, Gagauzians, Jews, Poles, Gypsies, etc.). The proportion of Russophones living in Moldova decreased in the years immediately after 1989 because of the emigration to Russia, after an immigration from Russia had taken place during the Soviet period.

The second largest city in the country, Tiraspol, had a population of 184,000 in 1990. Located in Transnistria, with a population of 158,069 in 2004, it is the capital of the breakaway republic. In contrast to Chişinǎu, Tiraspol has only some 15% Moldovans (Romanians), with Russians comprising 41.7%, and Ukrainians 33%. Due to deportations by the breakaway authorities, and emigration during and after the 1992 War of Transnistria, it has been reported that the Moldovan (Romanian) population has gone down by up to 10,000 since 1990.

Traditionally a predominantly rural country, Moldova gradually began changing its character in the 20th century. As urban areas became the sites of new industrial and intellectual jobs and amenities such as hospitals, the population of cities and towns grew. The Soviets kept the population of Moldova under control with the famous Soviet policy of propiska, which forbid a person to live in another locality than the one written in his/her identity documents without approval of Soviet authorities. The new residents Moldova's cities during the Soviet era were not only Moldovans, who had moved from the nearby rural areas, but also many Russians and Ukrainians who had been recruited to fill positions in industry and government, moving in from other parts of the Soviet Union.

At the time of the 1989 census, Moldova's total population was 4,335,400. The largest ethnic group, Moldovans, numbered 2,795,000, accounting for 64.5 % of the population. The other major ethnicities were Ukrainians, about 600,000 (14%); Russians, about 562,000 (13.0%); Gagauz, about 153,000 (4%); Bulgarians, about 88,000 (2%); and Jews, about 66,000 (2.0%). There were also smaller but appreciable numbers of Poles and Roma in the population. In Transnistria ethnic Moldovans accounted for 40% of the population in 1989, followed by Ukrainians (28%), and Russians (25%). In the early 1990s, there was significant emigration from the republic, primarily from urban areas and mainly by non-Moldovan minorities. Moldovans made up a sizable proportion of the urban population in 1989 (about half the population of Chişinǎu and other cities), as well as a large proportion of the rural population (over 85%), but only 23% of the ethnic Moldovans lived in the republic's ten largest cities, with the rest of the community being predominantly rural.

Unlike Moldovans, Russians tend to be urban dwellers in Moldova; more than 72% of them lived in the ten largest cities in 1989. Many of them came to the Moldova after it was occupied by the Soviet Union in 1940. Some of them came to alleviate the postwar shortage of qualified labor in the Moldavian SSR, which was created by the rapid industrialization, but also by the loss of human life during the war, deportations, and famine. Ethnic Russians settled mainly in Chişinǎu, Bălţi, Bender, and in the cities of the eastern bank of the Dniester, such as Tiraspol, Rîbniţa, and Dubăsari. Only about 25% of Moldova's Russians lived in Transnistria in 1990, as many as in Chişinǎu alone.

In 1990, Moldova's divorce rate of 3.0 divorces per 1,000 population had risen from the 1987 rate of 2.7 divorces per 1,000 population. The usual stresses of marriage were exacerbated by a society in which women were expected to perform most of the housework in addition to their work outside the home. Compounding this were crowded housing conditions (with their resulting lack of privacy) and the growing economic crisis.