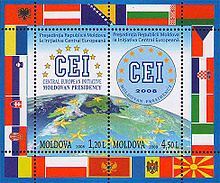 After achieving independence from the Soviet Union, Moldova had established relations with other European countries. A course for European Union integration and neutrality define the country's foreign policy guidelines.

In 1995 the country became the first post-Soviet state admitted to the Council of Europe. In addition to its participation in NATO's Partnership for Peace program, Moldova is also a member state of the United Nations, the OSCE, the North Atlantic Cooperation Council, the World Trade Organization, the International Monetary Fund, the World Bank, the Francophonie and the European Bank for Reconstruction and Development.

In 2005 Moldova and EU established an action plan that sought to improve the collaboration between the two neighboring structures.

After the War of Transnistria, Moldova had sought a peaceful resolution to the conflict in the Transnistria region by working with Romania, Ukraine, and Russia, calling for international mediation, and cooperating with the OSCE and UN fact-finding and observer missions.

Relations with the European Union

Moldova currently aspires to join the European Union[1] and is implementing its first three-year Action Plan within the framework of the European Neighbourhood Policy (ENP) of the EU.[2]

NATO relations with Moldova date back to 1992, when the country joined the North Atlantic Cooperation Council. Moldova works alongside NATO Allies and Partner countries in a wide range of areas through the Partnership for Peace and the Euro-Atlantic Partnership Council.

Moldova's relations with its western neighbour, Romania, have been sinuous since 1994. Most of Moldova was part of Romania during the interwar period (1918–40) and linguists generally agree that the Moldovan language is in fact identical with Romanian. However, Moldovans have been ambivalent about whether they consider themselves Romanians or Moldovans. Early signs that Romania and Moldova might unite after both countries achieved emancipation from communist rule quickly faded. Romania remains interested in Moldovan affairs, especially that country's civil conflict with the breakaway republic of Transnistria. However, the two countries have been unable even to reach agreement on a basic bilateral treaty; Romania is insistent (against determined Moldovan resistance) that such a treaty would have to refer to Romania and Moldova's 'special relationship'. Since 1994, the two countries enjoyed a visa-free arrangement that ended on January 1, 2007, with Romania's entry into European Union. This prompted many Moldovan citizens to apply for Romanian citizenship.[3]

Relations with Russia and other post-Soviet states

The Moldovan Parliament approved the country's membership in the Commonwealth of Independent States and the CIS charter on economic union in April 1994. Moldova however has never participated in any military aspects of CIS, citing its neutrality status.

In 1998 Moldova contributed to the founding of GUAM, a regional cooperation agreement made up of Georgia, Ukraine, Azerbaijan and Moldova. Although the agreement initially included a declaration of mutual defense, Moldova has since declared its disinterest in participating in any GUAM-based mutual defense initiative.

Russia continues to maintain military presence in the Transnistrian region of Moldova, despite previous agreements with Moldova and within OSCE and CAF to withdraw its troops and ammunition.

The territory of Moldova includes the separatist Transnistria region. Transnistria had a particularly large non-Moldovan population (ca. 60%) and broke away from Moldova less than a year after Moldova became independent at the fall of the Soviet Union. It has its own de facto government and acts independently from Chişinău since the War of Transnistria. The international diplomatic situation with respect to the question of Transnistria determines and is determined by Moldova's relations with Russia. Russia, Ukraine, OSCE, EU, and United States are involved at different degrees in the conflict resolution.

Moldova has embassy-level relationships with: