Demographics of the Netherlands

Demographics of the Netherlands

This article is about the demographic of the Netherlands, including population density, ethnicity, education level, health of the populace, economic status, religious affiliations and other aspects of the population. 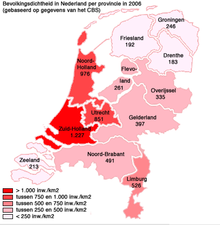 Population density per province in 2006

As a result of these demographic characteristics the Netherlands has had to plan its land use strictly. Since 1946 the Ministry of Housing, Spatial Planning and the Environment has been occupied with the national coordination of land use. Because of its high population density the Netherlands has also reclaimed land from the sea by poldering. Between 1927 and 1968 an entire province, Flevoland was created. It currently houses 365,301 people. Because of these policies, the Dutch have been able to combine high levels of population density with extremely high levels of agricultural production.

Even though the Netherlands is so densely populated; there are no cities with a population over 1 million in the Netherlands. Instead 'four big cities' as they are called (Amsterdam, Rotterdam, The Hague and Utrecht) can in many ways be regarded as a single metropolitan area, the Randstad ('rim or edge city') with about 7 million inhabitants around an agricultural 'green heart' (het Groene Hart). The unity of this conurbation can be illustrated by the current idea effort to create a circular train system connecting the four cities.

The Dutch population is ageing. Furthermore, the life expectancy has increased because of developments in medicine, and in addition to this, the Netherlands has seen increasing immigration. These developments combined with the population boom after the Second World War has created extremely low population growth: in 2005 saw the lowest absolute population growth since 1900.

This has created a demographic problem with consequences for health care and social security policy. As the Dutch population ages, the number of people able to work, as a percentage of the entire population, decreases. Important policy advisors like the CBS and the CPB have predicted that this makes the current system of old age pensions problematic: fewer people will work to pay for old age pensions, while there will be more people receiving those pensions. Furthermore the costs of health care are also projected to increase. These developments have caused several cabinets, most notably the recent Second cabinet Balkenende to reform the system of health care and social security: increasing participation in the labour market and making people more conscious of the money they spend on health care.

A large number[citation needed] of immigrants come from countries in Western Europe, mostly from the bordering countries of Germany and Belgium. There were five subsequent waves of immigration from other countries in recent history.

Further information: Integration law for new immigrants to the Netherlands

With the enlargement of the European Union during the 2000s, the Netherlands has seen a rise of migrants coming from new member countries.[citation needed] Migrant workers from these countries total about 100,000 as of 2007.[10] In the first nine months of 2007, about 13,000 immigrants from Bulgaria, Romania and Poland moved to the Netherlands, almost twice as much as in the same period a year earlier.[citation needed] Of the Poles who initially moved in 2004, about a quarter had returned by 2006.[11]

The Netherlands has seen considerable emigration. In the 1950s 560,000 people migrated to the United States, South Africa, Australia, Canada and New Zealand, leaving their war-torn and overpopulated home country behind. At least 60,000 of these migrants were Indo-European (Eurasian) repatriants that moved on, mostly to the US, after being repatriated to the Netherlands from the former Dutch East Indies during and after the Indonesian revolution.

In 2005 some 121,000 people migrated from the Netherlands. There is considerable migration towards neighbouring states, Belgium, Germany and the United Kingdom and to the Netherlands Antilles. Furthermore almost half of the current emigration consists of people returning to their country of birth, including rejected asylum seekers, after the more stringent migration laws were implemented.

Main article: Religion in the Netherlands

Main article: Languages of the Netherlands

The main language is Dutch, while West Frisian is also a recognized language and it is used by the government in the province of Fryslan. Several dialects of Low Saxon (Nedersaksisch in Dutch) are spoken in much of the north and east and are recognized by the Netherlands as regional languages according to the European Charter for Regional or Minority Languages. Another Dutch dialect granted the status of regional language is Limburgish, which is spoken in the south-eastern province of Limburg. Major immigrant languages are Turkish, Arabic and Berber.

The genetic makeup of the Dutch is typified by a high occurrence of the Y-chromosome markers: haplogroup R1b (averaging 70%) and haplogroup I (averaging 25%). These chromosomes are associated with Eurasiatic Cro Magnoid homo sapiens of the Aurignacian culture, the first modern humans in Europe, and the people of the Gravettian culture that entered Europe from the Middle East 20,000 to 25,000 years ago.[14]

With 70.4%, the Dutch have one of the highest percentages of haplogroup R1b occurrences in Northwestern Europe, comparable to that of the (combined) British population; 72%. Neighbouring populations have lower occurrence of this chromosome (French: 52.2% and Germans: 50.0%); with again a percentage similar to that of the Dutch among the inhabitants of the Iberian peninsula (Spain and Portugal) and French Atlantic coast.[15] The Dutch hence fit the Atlantic Haplotype Modal, which is the primary model of peoples living along or in the vicinity of the Atlantic Ocean and the North Sea.[16]

Within the R1b haplogroup its R1b1b2a1 subclade is most dominant, and in fact peaks in occurrence among the Dutch and Frisians at 37.2%. The Dutch share this high rate with the people in Southwest England (21.4%) and Denmark (17.7%).[17] Other haplogroups are less frequent in the Dutch population: Haplogroup E1b1b (8%) and haplogroup R1a1 (3.7%). The latter is found more frequently in East of the Netherlands.[18]