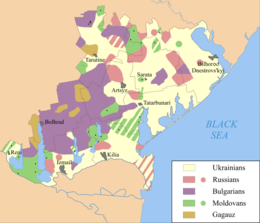 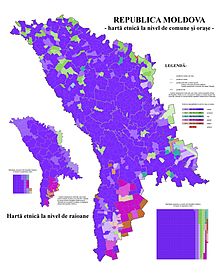 In Ukraine, the number of Bessarabian Bulgarians is estimated at over 129,000 in Budjak (in the Odessa Oblast in the southern part of the country), and 75,000 elsewhere (mostly in other parts of Southern Ukraine), according to the 2001 Ukrainian Census, which counted a total of 204,600 Bulgarians in Ukraine.

Outside Budjak, Odessa has many Bulgarians have moved there in recent years. The city of Bilhorod-Dnistrovsky is about 4% Bulgarian, making them the third-largest ethnicity there.

The results of the census held in October 2004, there are 65,072 Bessarabian Bulgarians (1.95% of the population) in Moldova (excluding the region of Transnistria), concentrated mostly in the southern parts — chiefly in Taraclia district. In the census held in November 2004 in Transnistria, 3,164 (3.16%) Bulgarians have been counted in Tighina and surroundings and further 10,515 (2.39%) on the Eastern bank of the river Dnestr.

Bessarabian Bulgarians represent a majority in one city of Moldova, Taraclia (10,732 Bulgarians, or 78%) and in 8 communes in the country:

The modern population of Bessarabian Bulgarians settled in the region of southern Bessarabia at the end of the 18th and beginning of the 19th centuries, at the time of feudal sedition in the Ottoman Empire, and after the Russo-Turkish Wars of the period. Particularly strong waves of emigration emerged after the Russo-Turkish Wars of 1806–1812 and 1828-1829. The settlers came primarily from what is now eastern Bulgaria, but many were also descendants of Bulgarians of the western part of the country that had moved east in and before the 18th century. Among the Bulgarians that emigrated to Bessarabia were also a handful of Albanians who also had settled in eastern Bulgaria some time before.

When during the Russian-Ottoman Wars, Russian Armies were reaching and crossing Danube, some local Bulgarians supported them. These people where compromised in the eyes of the Ottomans and therefore had a better chance moving to the Russian Empire. The Russian Propaganda also worked to convince Bulgarians to settle in areas recently conquered by them, from which Tatars were removed. Bulgarian settled not only in Bessarabia, but also in the Kherson region.[1]

After arriving in Bessarabia, Bulgarians and Gagauzians founded their own towns, such as Bolhrad (1819) and Comrat, and around 64 (according to some sources[citation needed]) or 43 (according to other sources[2]) villages. In 1856, after the Treaty of Paris, two counties of southern Bessarabia, Cahul County and Ismail County, revereted back to the Principality of Moldavia (since 1861 — Kingdom of Romania). That included the cities of including Bolgrad, Ismail and Chilia. Gaguzian settlements centred around Comrat, however, remained in the Russian Empire. A Bulgarian high school (gymnasium), the Bolhrad High School, was founded in Bolgrad (Bolhrad) on June 28, 1858 by the Moldavian authorities of Alexandru Ioan Cuza,[2] which had a positive effect on the development of Bulgarian education and culture, and is in fact the first modern Bulgarian gymnasium.

In 1861, 20,000 Bulgarians from the Romanian part of Bessarabia moved to Russia, where they were given land in Taurida Governorate to replace the Nogais who had left what was formerly territory of the Crimean Khanate. Those settlers founded another Bulgarian community — the Tauridan Bulgarians.

After the whole region of Bessarabia was re-incorporated again by the Russia Empire in 1878, the process of Russification grew stronger, as many Bulgarian intellectuals returned to newly established Principality of Bulgaria to help set up the Bulgarian state. The Bulgarian minority was deprived of the rights earned during the Romanian control.

The whole of Bessarabia united with Romania in April 1918, after the Russian Revolution and the collapse of the Russian Empire. In contrast with the previous period of Romanian control, most cultural and educational rights of the Bulgarian minority were not returned.

During the Tatarbunar Uprising of 1924, when Soviets unsuccessfully tried to overthrow the Romanian administration in southern Bessarabia, many Bulgarians (alongside local Moldovans (Romanians), and Bessarabian Germans) sided with Romanian authorities, as pointed out by Gheorghe Tătărescu in the report given on behalf of the Ministry of the Interior to the Romanian Parliament in 1925.[3]

The Molotov-Ribbentrop Pact of 1939 led to an Soviet ultimatum in June 1940, the invasion of Soviet forces into Bessarabia, and its inclusion into the Soviet Union. Although being an officially accepted minority under Soviet rule, the Bessarabian Bulgarians lost some features of their cultural identity in the period.

A movement of national revival originated in the 1980s, with Bulgarian newspapers being published, cultural and educational associations being established, and Bulgarian being introduced into the local schools especially after the dissolution of the Soviet Union: first only as an optional, but later as a compulsory subject. The Association of Bulgarians in Ukraine was founded in 1993, and the Taraclia State University, co-funded by the Bulgarian state, was established in the largely Bulgarian-populated Moldovan town of Taraclia in 2004. The languages of education at the university are Bulgarian and Romanian.