Greece was inhabited as early as the Paleolithic period. Prior to the 2nd millennium BC, the Greek peninsula was inhabited by various pre-Hellenic peoples, the most notable of which were the Pelasgians. The Greek language ultimately dominated the peninsula and Greece's mosaic of small city-states became culturally similar. The population estimates on the Greeks during the 4th century BC, is approximately 3.5 million on the Greek peninsula and 4 to 6.5 million in the rest of the entire Mediterranean Basin,[5] including all colonies such as those in Magna Graecia, Asia Minor and the shores of the Black Sea.

During the history of the Byzantine Empire, the Greek peninsula was occasionally invaded by the foreign peoples like Goths, Avars, Slavs, Normans, Franks and other Romance-speaking peoples who had betrayed the Crusades. The only group, however, that planned to establish permanent settlements in the region were the Slavs. They supposedly settled in isolated valleys of the Peloponnese and Thessaly, establishing segregated communities that were referred by the Byzantines as Sclaveni. Traces of Slavic culture in Greece are very rare and by the 9th century, the Sclaveni in Greece were largely eliminated. However, some Slavic communities managed to survive in rural Macedonia. At the same time a large Sephardi Jewish emigrant community from the Iberian peninsula established itself in Thessaloniki, while there were population movements of Arvanites and Vlachs, who established communities in several parts of the Greek peninsula. The Byzantine Empire ultimately fell to Ottoman Turks in the 15th century and as a result Ottoman colonies were established in the Balkans, notably in Macedonia, the Peloponnese and Crete. Many Greeks either fled to other European nations or to geographically isolated areas (i.e. mountains and heavily forested territories) in order to escape foreign rule. For those reasons, the population decreased in the plains, while increasing on the mountains. The population transfers with Bulgaria and Turkey that took place in the early 20th century, added in total some two million Greeks from to the demography of the Greek Kingdom. 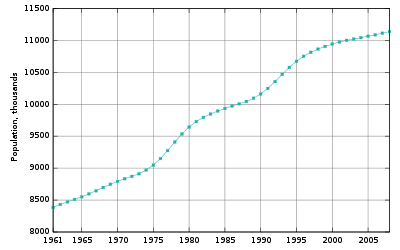 Greece is divided into nine geographic regions. The population of each region according to the 2001 census:

Greece received many undocumented immigrants during the 2000s. Migrants make use of the many islands in the Aegean Sea, directly west of Turkey. A spokesman for the European Union's border control agency said that the Greek-Albanian border is "one of Europe's worst-affected external land borders." Migrants across the Evros region bordering Turkey face land-mines. Principal illegal immigrants include Albanians, Pakistanis, Kurds, Afghans, Iraqis and Somalis.[14][15] 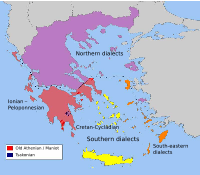 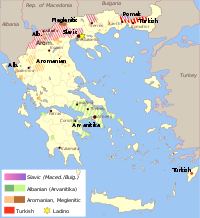 Note: Greek is the dominant language throughout Greece; inclusion in a non-Greek language zone does not necessarily imply that the relevant minority language is still spoken there, or that its speakers consider themselves an ethnic minority.

The official language of Greece is Greek, spoken by 93% of the total population as their primary language, and by almost all as a second language at least. Additionally, there are a number of linguistic minority groups that are bilingual in a variety of non-Greek languages, and most of these groups identify ethnically as Greeks. The most common of all these dialects, the groups that speak them and the regions where they are considered native are:[16]

Greek education is free and compulsory for children between the ages of 5 and 15. English study is compulsory from third grade through high school. University education, including books, is also free, contingent upon the student's ability to meet stiff entrance requirements. A high percentage of the student population seeks higher education. More than 100,000 students are registered at Greek universities, and 15% of the population currently holds a university degree. Admission in a university is determined by state-administered exams, the candidate's grade-point average from high school, and his/her priority choices of major. About one in four candidates gains admission to Greek universities.

Greek law does not currently offer official recognition to the graduates of private universities that operate in the country, except for those that offer a degree valid in another European Union country, which is automatically recognized by reciprocity. As a result, a large and growing number of students are pursuing higher education abroad. The Greek Government decides through an evaluation procedure whether to recognize degrees from specific foreign universities as qualification for public sector hiring. Other students attend private, post-secondary educational institutions in Greece that are not recognized by the Greek Government. At the moment extensive public talk is made for the reform of the Constitution in order to recognize private higher education in Greece as equal with public and to place common regulations for both.

The number of Greek students studying at European institutions is increasing along with EU support for educational exchange. In addition, nearly 5,000 Greeks are studying in the United States, about half of whom are in graduate school. Greek per capita student representation in the US (one every 2,200) is among the highest in Europe.

According to the Greek constitution, Eastern Orthodox Christianity is recognized as the "prevailing religion" in Greece. During the centuries of Ottoman domination, besides its spiritual mandate, the Orthodox Church, based in Constantinople (present-day Istanbul), also functioned as an official representative of the Christian population of the empire. The Church is often credited with the preservation of the Greek language, values, and national identity during Ottoman times. The Church was also an important rallying point in the war for independence, although this latter position is somewhat controversial as the official Church in Constantinople initially condemned the breakout of armed struggle against the Empire. The Church of Greece was established shortly after the formation of a Greek national state. Its authority to this day extends only to the areas included in the independent Greek state before the Balkan Wars of 1912-1913. There is a Muslim minority concentrated in Thrace and officially protected by the Treaty of Lausanne. Besides Pomaks (Muslim Bulgarian[3] speakers) and Roma, it consists mainly of ethnic Turks, who speak Turkish and receive instruction in Turkish at special government-funded schools. There are also a number of Jews in Greece, most of whom live in Thessaloniki. There are also some Greeks who adhere to a reconstruction of the ancient Greek religion.[17] A place of worship has been recognized as such by court.[18]