The demographics of Serbia have been shaped by its unique geographic location. Situated in the middle of the Balkans, many different ethnic groups are citizens of Serbia. Serbs are overwhelmingly the largest ethnic group in the country. Furthermore, Albanians have represented the largest minority group in modern Serbia. Other important ethnic groups by size include Hungarians, Bosniaks, Roma, Croats, Slovaks, Bulgarians, Romanians. Furthermore, with over 25 different national communities Vojvodina, Serbias northern region is one of the most ethnically diverse territories in Europe.[citation needed] 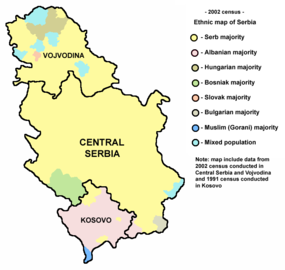 Ethnic map of Serbia, based on municipality data 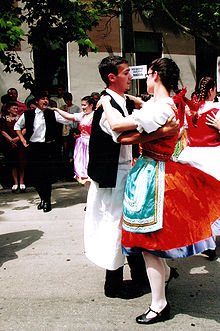 Hungarians are the second largest ethnic group in Vojvodina with a population of 290,207.

Composition of Central Serbia and Vojvodina

The ethnic composition of Central Serbia and Vojvodina, according to the 2002 census:

definition: age 15 and over can read and write