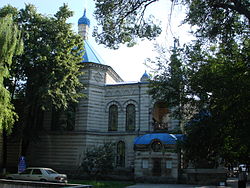 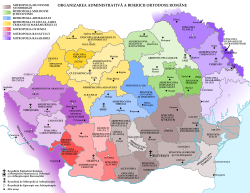 Administrative map of the Romanian Orthodox Church, including the Metropolis of Bessarabia

The current Metropolitan of Bessarabia is Petru Păduraru. [2]

In 2004, after years of legal hurdles and a final decision by the European Court of Human Rights, the Orthodox Church of Bessarabia received official registration, the Supreme Court of Justice of the Republic of Moldova recognizing it as "the spiritual, canonical, historical successor of the Metropolitan See of Bessarabia which functioned till 1944, including".[3] About 20% of country's Orthodox churches were or changed to be under its jurisdictions; a strong desire to similar moves has been expressed in many other parishes.[citation needed] This is a major area of tension with the Moldovan Orthodox Church. The position of the Romanian Orthodox Church in the dispute with the Russian Orthodox Church over the territorial jurisdiction is, according to a press release, that the two Metropolitan Sees should "peacefully co-exist and brotherly cooperate (…) harmonising, with wisdom and realism, the territorial principle with the ethnic principle, as agreed in the pastoral service of the Orthodox in Diaspora."[3]

The church is currently recognized only by some other Orthodox Churches, since the Patriarchate of Moscow opposes its recognition by all of them.[4] The current metropolitan in this church is Petru Păduraru (born 24 October 1946 in Ţiganca, elected as metropolitan in 1992), and it has about 720,000 members.[5]