A yurt in Tos Bulak 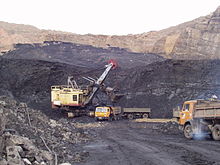 A coal mine in Tuva

The Tyva Republic (Russian: Респу́блика Тыва́, tr. Respublika Tyva, IPA: [rʲɪˈspublʲɪkə tɨˈva]; Tuvan: Тыва Республика, Tyva Respublika), or Tuva (Russian: Тува́), is a federal subject of Russia (a republic). It lies in the geographical center of Asia, in southern Siberia. The republic borders with the Altai Republic, the Republic of Khakassia, Krasnoyarsk Krai, Irkutsk Oblast, and the Republic of Buryatia in Russia and with Mongolia to the south. Its capital is the city of Kyzyl. Population: 307,925 (2010 Census preliminary results).[7]

Forests, mountains, and steppe make up a large part of the geography.

A majority of the people are Tuvans who speak the Tuvan language, but Russian is also spoken extensively. Tuva is governed by the Great Khural which elects a chairman for a four-year term. The current chairman is Sholban Kara-ool.

The republic is situated in the far south of Siberia. Its capital city of Kyzyl is located near the geographic "center of Asia". The eastern part of the republic is forested and elevated, and the west is a drier lowland.

There are over 8,000 rivers in the republic. The area includes the upper course of the Yenisei River, the fifth longest river in the world. Most of the republic's rivers are Yenisei tributaries. There are also numerous mineral springs in the area.

There are numerous lakes on the republic's territory, many of which are glacial and salt lakes. Major lakes include:

The area of the republic is a mountain basin, ca. 600 m high, encircled by the Sayan and Tannu-Ola ranges. Mountains and hills cover over 80% of the republic's territory. Mount Mongun-Tayga 'Silver Mountain' (3,970 m) is the highest point in Siberia and is named from its glacier.

The historic region of Tannu Uriankhai, of which Tuva is a part, was controlled by the Mongols from 1207 to 1757, when it was brought under Manchu rule (Qing Dynasty, the last dynasty of China) until 1911.

During the 1911 revolution in China, tsarist Russia formed a separatist movement among the Tuvans. Tuva became nominally independent as the Urjanchai Republic before being brought under Russian protectorate as Uryankhay Kray under Tsar Nicholas II on 17 April 1914. A Tuvan capital was established, called Belotsarsk (Белоца́рск; literally, "Town of White Tsar"). Meanwhile, in 1911, Mongolia became independent, though under Russian protection.

Following the Russian Revolution of 1917 which ended the imperial autocracy, most of Tuva was occupied from 5 July 1918 to 15 July 1919 by Aleksandr Kolchak's "White" Russian troops. Pyotr Ivanovich Turchaninov was named governor of the territory. In the autumn of 1918 the southwestern part was occupied by Chinese troops and the southern part by Mongol troops led by Khatanbaatar Magsarjav.[citation needed] From July 1919 to February 1920 the communist Red Army controlled Tuva, but from 19 February 1920 to June 1921 it was occupied by China (governor was Yan Shichao [traditional, Wade-Giles transliteration: Yan Shi-chao]).

On August 14, 1921 the Bolsheviks (supported by Russia) established a Tuvan People's Republic, popularly called Tannu-Tuva. In 1926, the capital (Belotsarsk; Khem-Beldyr since 1918) was renamed Kyzyl, meaning "Red"). Tuva was de jure an independent state between the World Wars.

The Soviet Union annexed Tuva outright in 1944, with the approval of Tuva's Little Khural (parliament). The exact circumstances surrounding Tannu-Tuva's incorporation into the USSR in 1944 remain obscure. Salchak Toka, the leader of Tuvan communists, was given the title of First Secretary of the Tuvan Communist Party, and became the de-facto ruler of Tuva until his death in 1973. Tuva was made the Tuvan Autonomous Oblast and then became the Tuva ASSR on October 10, 1961. The Soviet Union kept Tuva closed to the outside world for nearly fifty years.

In February 1990, the Tuvan Democratic Movement was founded by Kaadyr-ool Bicheldei, a philologist at Kyzyl University. The party aimed to provide jobs and housing (both were in short supply), and also to improve the status of Tuvan language and culture. Later on in the year there was a wave of attacks against Tuva's sizeable Russian community, resulting in 88 deaths. Russian troops eventually were called in. Many Russians moved out of the republic during this period. To this day, Tuva remains remote and difficult to access.[13]

Tuva was a signatory to the March 31, 1992, treaty that created the Russian Federation. A new constitution for the republic was drawn up on October 22, 1993. This created a 32-member parliament (Supreme Khural) and a Grand Khural, which is responsible for foreign policy and any possible changes to the constitution, and ensures that Tuvan law is given precedence. The constitution also allowed for a referendum if Tuva ever sought independence. This constitution was passed by 53.9% (or 62.2%, according to source) of Tuvans in a referendum on December 12, 1993.[14]

At the same time, the official name was changed from Tuva (Тува) to Tyva (Тыва). However, the Constitution of the Russian Federation is legally the primary law for every federal subject, therefore following the text and the spirit of the Federal Constitution any reference to "sovereignty" or "foreign policy" or any other attribute of an independent state in the Tyvan Constitution is illegal and practically meaningless.

The present flag of Tuva — yellow for prosperity, blue for courage and strength, white for purity — was adopted on September 17, 1992. See below under Religion.

The republic's Constitution was adopted on October 23, 1993.

On April 3, 2007, Russian president Vladimir Putin nominated Sholban Kara-ool, 40, a former champion wrestler, as the Chairman of the Government of Tuva. [2] Sholban's candidacy was approved by the Khural on April 9, 2007.[15]

Tuva has a developing mining industry (coal, cobalt, gold, and more). Food processing, timber, and metal working industries are also well-developed. Most of the industrial production is concentrated in the capital Kyzyl and in Ak-Dovurak. According to the HDI, the republic of Tuva is the poorest region of Russia.

Tuva has as yet no railway - although (in)famous postage stamps, designed in Moscow during the time of Tuvan independence, mistakenly depict locomotives as demonstrating Soviet-inspired progress there.

There are three roads leading to Tuva, a dirt track over the mountains from Khakassia to Ak Dovurak, and an asphalt road over the passes between Khakassia (Abakan) and Kyzyl: both of these are cut off by snowfall and avalanches from time to time in winter. The third road goes south, turning into a track before entering Mongolia. The only external bus and taxi services are between Khakassia (Abakan) and Kyzyl.

Kyzyl has both large public buses and private minibus services, and buses and taxis also connect Kyzyl with the larger settlements.

Passenger ferries ply the Greater Yenisei (Bii-Khem) between Kyzyl and Toora-Khem in Todzha (Upper Tuva) when there is neither too little nor too much water over the rapids.

There is a small airfield in Kyzyl with intermittent flights.

The Tuvan people are famous for Tuvan throat singing.

Khuresh, the Tuvan form of wrestling, is a very popular sport. Competitions are held at the annual Naadym festival at Tos-Bulak.

Sainkho Namtchylak is one of the few singers from Tuva to have an international following. She is also very involved with Tuvan culture. Every year she invites Western musicians to perform in Kyzyl and to learn about the country, its culture and its music. In recent years Kongar-ool Ondar has become well-known in the West as well, in large part because of the film Genghis Blues featuring Ondar and American blues singer Paul Pena. Huun-Huur-Tu has been one of the most well known Tuvan music ensembles since the late 1990s, while the Alash ensemble came to prominence in the early 2000s.

The Tuvan language is Turkic, although with many loan-words from Mongolian. It is currently written with a modified Cyrillic alphabet, previously used Turkic runes, later Mongolian, then Latin alphabets. When part of China, Tuva was administered as part of Outer Mongolia, and the language difference was a determining factor in Tuva seeking full independence following the collapse of the Chinese Empire.

The Tuvan people have a rich tradition of orally transmitted folklore, including many genres, ranging from very brief riddles and aphorisms, to tongue twisters, magical tales, hero tales, scary stories, and epics that would take many hours to recite. A few examples and excerpts of the epic genres, such as Boktu-Kirish, Bora-Sheelei have been published. This art form is now endangered as the traditional tale-tellers grow old and are not replaced by younger practitioners.

Three religions are widespread among the people of Tuva: Tibetan Buddhism, Orthodox Christianity and shamanism. Tibetan Buddhism's present-day spiritual leader is Tenzin Gyatso, the fourteenth Dalai Lama. In September 1992, the fourteenth Dalai Lama visited Tuva for three days.[16][17] On September 20, he blessed and consecrated the new yellow-blue-white flag of Tuva, which had just been officially adopted three days previously.[18]

The Tuvan people - along with the Yellow Uyghurs in China - are one of the only two Turkic groups who are mainly adherents to Tibetan Buddhism, combined with native Shamanism.[19] During the sixteenth and seventeenth centuries Tibetan Buddhism gained increasing popularity in Tuva. An increasing number of new and restored temples are coming into use, as well as novices being trained as monks and lamas.

Religious practice declined under the restrictive policies of the Soviet period but is now flourishing.[20][21]

The most important facilities of higher education include the Tuvan State University and the Tuvan Institute of Humanities, both located in the capital Kyzyl.

As can be seen above, during the period 1959-2002 there has been more than a doubling of ethnic Tuvans. The Russian population growth slowed by the 1980s and has now begun to shrink.

Official languages are Tuvan (Turkic) and Russian (Slavic). Outside Kyzyl, settlements have few if any Russian inhabitants and in general Tuvans use their original language as their first language. However, there is a small population of Old believers in the republic scattered in some of the most isolated areas. Before the Soviet rule, there were a number of large ethnic Russian old believer villages, but as the atheist ideology crept in, the believers moved deeper and deeper in to the Taiga in order to avoid contact with outsiders. Major Old believer villages are Erzhei, Uzhep, Unzhei, Zhivei and Bolee Malkiye (all in the Kaa-Khemsky District). Smaller ultra-Orthodox settlements are found further upstream.[23]

Ethnic Russians make up majority in Kaa-Khemsky District, one of the most remote regions in Tyva. The population is mostly Old believers.[24]

Tuvans are closely related ethnically and linguistically to the Khakas to their north and the Altai to their west, but closer culturally to the Mongolians to their south and the related Buryats to their east, with whom they share their Buddhism.