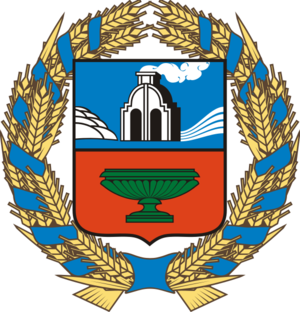 Altai Krai ( _ru. Алта́йский край, "Altaysky kray") is a federal subject of (a ) in the . It borders with, clockwise from the south, , Novosibirsk and s, and the . The krai's administrative center is the city of .

The krai's head of administration died in a car crash on August 7, 2005.

The krai's economy depends on agriculture and granted by the Russian government.

This area is part of a great crossroads in the ancient world. [cite web
url=http://www.pacificenvironment.org/article.php?id=934
title=Greater Altai – Altai Krai, Republic of Altai, Tyva (Tuva), and Novosibirsk — Crossroads
publisher=
accessdate=2006-11-30] tribes crossed through the territory during periods of migration. The nomadic tribes were composed of different peoples. Archeological sites reveal that ancient humans lived in the area. The are a , some of whom have settled here, who were originally nomadic and date back to the . [cite web
url=http://www.waytorussia.net/Features/RussianPeople/2003Sept24/
title=Peoples from Russia — Alexey, guide in Altay region
publisher=
accessdate=2006-11-30]

Altai Territory is situated in the southeastern part of Western Siberia and is part of the West Siberia economic district along with Kemerovo, Novosibirsk, Omsk, Tomsk, and Tyumen regions and the Altai Republic. The territory is favorably located close to major sources of raw materials, has a well-developed infrastructure, especially in the area of heavy industry, and an abundance of natural resources. It is a major industrial and agricultural region of the country. As in the rest of Russia, the economic restructuring of the 1990s led to a marked economic decline in Altai Territory, particularly in industry and agriculture. However, there is now reason to believe that the territory's economy is stabilizing. Its present economic prospects are good due to the presence of abundant local raw materials, high scientific potential, leading technologies, skilled personnel, and a low-cost labor force. The sales market extends far beyond the borders of the West Siberia economic district. The territory's administration is interested in foreign investments and is creating the necessary conditions for setting up joint ventures.

There are more than 2000 industrial companies operating in both heavy and light industry. The leading sectors are the power, engineering, chemical and petrochemical, building material, textile, and light industries. Output is currently increasing in certain industries for the first time since perestroika. This increase is particularly noticeable in the flour-, grain-, and feed-milling and chemical and petrochemical industries and in individual heavy industry sectors, tractor production.

Small and medium business is developing rapidly in Altai Territory, which is a necessary condition for economic stability and growth. Today, nearly a quarter of the entire working population is employed in this sector.

Altai Territory is one of Russia's most important agricultural regions. Development of the territory's lands began in the second half of the 18th century; and peasants from other Russian regions began resettling here in 1861. By 1917, the territory's rural population had reached 1,998,000 people and the total area under cultivation was 25,060 square kilometres.

Today, farmland covers an area of 110,000 km², of which 69,220 km², or nearly 41% of the total area of the territory, is cropland. The main crops are hard varieties of spring wheat, buckwheat, millet, peas, barley, oats, and potatoes and other vegetables. This is this only region of Siberia where sunflowers, soybeans, sugar beets, and certain kinds of fruit grow.

In 1960, the State Economic Council under the Council of Ministers of the USSR carried out comprehensive zoning of Altai Territory, which divided the territory into seven natural and economic agricultural zones. Wide temperature swings are characteristic of the territory's climate, so that ensuring harvest stability is not easy. It requires a specific approach to developing cropland in order to increase farming efficiency. The Kulundinskaya Plain, the Priobskoe Plateau, and the left and right banks of the Ob River are well developed agriculturally. Natural fodder land, including hayfields and pasture, occupies 39,060 km², which includes 11,930 km² of hayfields and 27130 km² of pasture.

Livestock farming specializes in meat, milk, wool, and egg production. Altai Territory is a major wool producer and an important base for breeding fine-fleeced pedigreed sheep, which makes it possible to export more than 30,000 head of pedigreed sheep per year. The territorial market also offers pedigreed swine, poultry, meat, eggs, honey, and wild products such as deer antlers, furs, and pelts.

Fruit-growing in Altai is made possible by specialists of the internationally known Lisavenko Horticultural Research Institute, which has developed a range of fruit and berry varieties adapted to the climate.

Today, Altai Territory not only meets the agricultural product requirements of its own population, but also the requirements of many other Russian regions. Altai exports many kinds of cereals, as well as processed grain products such as wheat and rye flour, pasta products, sugar beets, sunflower seeds, and flax fiber. The territory is Siberia's largest grain, sugar, and meat producer and its second-largest cheese producer.