East Asia or Eastern Asia (the latter form preferred by the United Nations) is a subregion of Asia that can be defined in either geographical[3] or cultural[4] terms. Geographically and geo-politically, it covers about 12,000,000 km2 (4,600,000 sq mi), or about 28 percent of the Asian continent, about 15 percent bigger than the area of Europe.

More than 1.5 billion people, about 38% of the population of Asia or 22% of all the people in the world, live in geographic East Asia, about twice Europe's population. The region is one of the world's most populated places, with a population density of 133 inhabitants per square kilometre (340 /sq mi), being about three times the world average of 45 /km2 (120 /sq mi), although Mongolia has the lowest population density of a sovereign state.[5] Using the UN subregion definitions, it ranks second in population only to Southern Asia.

Historically, many societies in East Asia have been part of the Chinese cultural sphere, and East Asian vocabulary and scripts are often derived from Classical Chinese and Chinese script. Sometimes Northeast Asia is used to denote Japan and Korea.[6] Major religions include Buddhism (mostly Mahayana), Confucianism or Neo-Confucianism, Taoism, Chinese folk religion in China, Shinto in Japan, Shamanism in Korea, Mongolia and other indigenous populations of northern East Asia[7][8], and recently Christianity[9] in South Korea. The Chinese Calendar is the root from which many other East Asian calendars are derived.

Uses of the term East Asia

The UN subregion of Eastern Asia and other common definitions[3] of East Asia contain the entirety of the People's Republic of China[10] (including all SARs and autonomous regions), Republic of China[11] (commonly known as "Taiwan"), Japan, North Korea, South Korea, and Mongolia[3]. China, Taiwan, Japan, Korea, and Vietnam are commonly seen as being encompassed by cultural East Asia:[12][13][14][15]

There are mixed debates around the world whether these countries or regions should be considered in east Asia or not.

In business and economics, East Asia has been used to refer to a wide geographical area covering ten countries in ASEAN, People's Republic of China, Japan, South Korea, and Taiwan (officially the Republic of China) [11] for the purpose of economic and political regionalism and integration.[citation needed] United States foreign policy under the Obama administration considers Southeast Asia a part of East Asia.[17] The tendency of this usage, perhaps, started especially since the publication of World Bank on The East Asian Miracle in 1993 explaining the economic success of the Asian Tiger and emerging Southeast Asian economies (Indonesia, Malaysia, the Philippines and Thailand).[citation needed]

In addition, this usage has also been driven[says who?] by Asia-wide economic interconnectedness since the co-operation between ASEAN and its three dialogue partners was institutionalized under the ASEAN Plus Three Process (ASEAN+3 or APT) in 1997. The idea of East Asian Community arising from ASEAN+3 framework is also gradually shaping the term East Asia to cover more than China, Korea, Japan and Taiwan. This usage however, is unstable: the East Asian Summit, for instance, includes India and Australia.

East Asia is considered to be a part of the Far East, which describes the region's geographical position in relation to Europe rather than its location within Asia. However, in contrast to the United Nations definition, East Asia commonly is used to refer to the eastern part of Asia, as the term implies. Observers preferring a broader definition of 'East Asia' often use the term Northeast Asia to refer to the greater China area, the Korean Peninsula, and Japan, with Southeast Asia covering the ten ASEAN countries. This usage, which is increasingly widespread in economic and diplomatic discussion, is at odds with the historical meanings of both 'East Asia' and 'Northeast Asia'.[18][19][20] The Council on Foreign Relations defines Northeast Asia as Japan and Korea.[6]

Pass of the ISS over Mongolia, looking out west towards the Pacific Ocean, China, and Japan. As the video progresses, you can see major cities along the coast and the Japanese islands on the Philippine Sea. The island of Guam can be seen further down the pass into the Philippine Sea, and the pass ends just to the east of New Zealand. A lightning storm can be seen as light pulses near the end of the video. 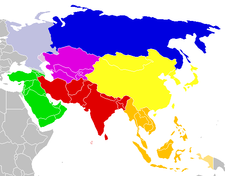