Yenisei (Russian: Енисе́й), also written as Yenisey,[2] is the largest river system flowing to the Arctic Ocean. It is the central of the three great Siberian rivers that flow into the Arctic Ocean (the other two being the Ob River and the Lena River). Rising in Mongolia, it follows a northerly course to the Yenisei Gulf in the Kara Sea, draining a large part of central Siberia, the longest stream following the Yenisei-Angara-Selenga-Ider river system.

The upper reaches, subject to rapids and flooding, pass through sparsely populated areas. The middle section is controlled by a series of massive hydroelectric dams fuelling significant Russian primary industry. Partly built by gulag labor in Soviet times, industrial contamination remains a serious problem in an area hard to police. Moving on through sparsely-populated taiga, the Yenisei swells with numerous tributaries and finally reaches the Kara Sea in desolate tundra where it is icebound for more than half the year.

The 320 km (200 mi) partly navigable Upper Angara River feeds into the northern end of Lake Baikal from the Buryat Republic but the largest inflow is from the Selenga which forms a delta on the south-eastern side. The longest tributaries rise on the eastern slopes of central Mongolia's Khangai Mountains. Another tributary, the Tuul passes through the Mongolian capital, Ulan Bator while the Egiin Gol drains Lake Khövsgöl (500 km) downstream, where the 124 m (407 ft) dam built in the 1960s produces 4500 MW. The resultant reservoir is nicknamed Dragon Lake because of its outline. The tributary Oka and Iya rivers, which rise on the north slopes of the Eastern Sayan Mountains, form the 'jaws' and 400 km (250 mi) of the Angara forms the 'tail'. There are newer dams almost as large at Ust-Ilimsk 250 km (155 mi) downstream (also damming the tributary Ilim river) and Boguchany a further 400 km (250 mi) downstream (not operational). Further dams are planned but the environmental consequences of completely taming the Angara are leading to protests which may prevent funding.

Angarsk, the center of the expanding Eastern Siberian oil industry and site of a huge Yukos-owned refinery, lies 50 km (31 mi) downstream of Irkutsk. A major pipeline takes oil west, and a new one is being built to carry oil east for supply to Japan from the Sea of Japan port of Nakhodka. The exact potential of Eastern Siberia is unknown, but two new major fields are the Kovyktinskoye field near Zhigalovo 200 km (125 mi) north of Irkutsk and the extremely remote Verkhnechonskoye field 500 km (310 mi) north of Irkutsk on the Central Siberian Plateau. 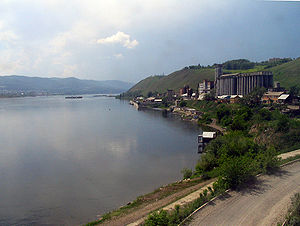 The river as seen from the trans-Siberian railway near Krasnoyarsk

The Great Kaz joins the Yenisei 300 km (186 mi) downstream from Strelka. It is noteworthy for its connection to the Ob via Ob-Yenisei canal and Ket River. The river starts to widen, its bed being littered with islands as numerous rivers augment its flow, in particular 1,800 km (1,120 mi) Stony (Podkamennaya) Tunguska, and the 3,000 km (1,860 mi) Lower (Nizhnyaya) Tunguska at Turukhansk draining the desolate central Siberian Plateau from the east. The remote Tunguska (Тунгуска) region is most famous for the 1908 meteorite impact, but is now being explored for oil. Beyond Turukhansk, the river enters tundra territory.

The river is icebound for more than half the year, and if unchecked ice could dam the river causing major flooding. Explosives are used to keep the water flowing. The final town is Dudinka which is connected to Krasnoyarsk by regular passenger boat. The river widens to a 50 km (31 mi) estuary, the Yenisei Gulf, for its final 250 km (155 mi) and the shipping lanes are kept open by icebreaker.

During the ice age, the route to the Arctic was blocked by ice. Though the exact details are unclear, the Yenisei is believed to have flowed into a huge lake filling much of western Siberia, eventually flowing into the Black Sea. (See West Siberian Glacial Lake of the early Weichselian Glaciation)

The first team to navigate the Yenisey's entire length, including its violent upper tributary in Mongolia, was an Australian-Canadian effort completed in September 2001. Ben Kozel, Tim Cope, Colin Angus and Remy Quinter were on this team. Both Kozel and Angus wrote books detailing this expedition,[5] and a documentary was produced for National Geographic Television.

Ancient nomadic tribes such as the Ket people and the Yugh people lived along its banks. The Ket, numbering about 1000, are the only survivors today of those who originally lived throughout central southern Siberia near the river banks. Their extinct relatives included the Kotts, Assans, Arins, Baikots, and Pumpokols who lived further upriver to the south. The modern Ket lived in the eastern middle areas of the river before being assimilated politically into Russia during the 17th through 19th centuries.[6]

Russians first reached the upper Yenisei in 1605, travelling from the Ob River, up the Ket River, portaging and then down the Yenisei as far as the Sym River.[7] In 1607 they went east up the Angara River and in 1608 south towards Krasnoyarsk. Yeniseisk at the Ket-Angara junction was founded in 1619 and Krasnoyarsk upriver in 1628. In 1607 the lower Yenisei was reached from Mangazeya, with the founding Turukhansk at the mouth of the Lower Tunguska. The mouth of the Yenisey was reached in 1610 and the Stony Tunguska some time before 1626.

During World War II, Nazi Germany and the Japanese Empire agreed to divide Asia along a line that followed the Yenisei River to the border of China, and then along the border of China and the Soviet Union, the northern and western borders of Afghanistan, and the border between Iran and India (what is now Pakistan was then part of India).[8] Since the Axis lost World War II, this plan was never implemented. See A-A line for more information.