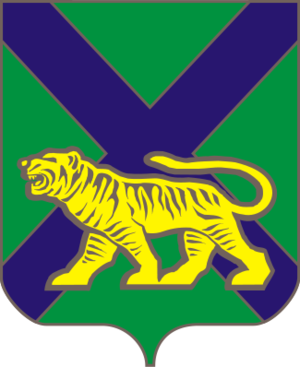 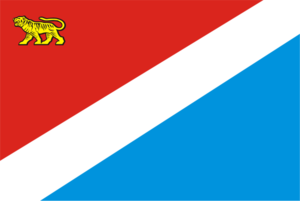 Primorsky Krai ( _ru. Примо́рский край) also known as Primorye ( _ru. Примо́рье), is a federal subject of (a ). "Primorsky" means "maritime" in Russian, hence the region is sometimes referred to as Maritime Province.

Primorsky Krai, bordered by China, , and warm, but freezing in winter waters of the , is the extreme South-Eastern region of , located between 42° and 48° North Latitude and 130° and 139° East Longitude. It is stretched in the meridianal direction, the distance from its extreme Northern point to the extreme Southern point totals about km to mi|900|precision=0. Highlands dominate the territory of the . Most of the territory is mountainous, and almost 80% is forested. The average elevation is about m to ft|500|precision=-1. is a mountainous formation, extending for the most part of the Krai. It consists of a number of parallel ranges: the Partizansky, the Siny (Blue), the Kholodny (Cold), and others. There are many caves in the South of Primorye. The relatively accessible (the Sleeping Beauty) in the could be recommended for tourists. There are comparatively well-preserved fragments of the ancient volcanoes in the area. The ranges are cut by the picturesque narrow and deep valleys of the rivers and by large brooks, such as the Partizanskaya, the Kiyevka, the Zerkalnaya, the Cheryomukhovaya, the Yedinka, the Samarga, the Bikin, and the Bolshaya Ussurka. Most rivers in the have rocky bottoms and limpid water. The largest among them is the Ussuri, with a length of km to mi|903. The head of the originates km to mi|20 to the East of . The vast extends into the West and the South-West of Primorye, carpeted by coniferous-deciduous forests. A part of the Lowland surrounding the largest lake in the , , is occupied by a forest-steppe.

The geographic location of Primorye accounts for the variety of its flora - there are the mountainous tundra areas, conifers and coniferous-deciduous forests, forest-steppe, which is sometimes called the , where the ancient plant species have been preserved: the s, the lotus, the , etc. The fauna of Primorye is also diverse, the following animals are found in the : the ("Ursus thibetanis"), the , the , the , the , the ("Cervus elaphus xanthopygos"), the , the , the goral ("Nemorhaedus goral"), the sika deer, the , the ("Aix galericulata"), the ("Ciconia nigra"), the ("Mergus squamatus"), the ("Sturnia philippensis"), the ("Aegypius monachus"), the ("" family), and others. Among 690 species of birds inhabiting the territory of the former USSR, 350 are found in Primorye.

Primorye is one of the few places where the forests are still pristine, comparable in terms of passability to a tropical jungle. The climate conditions of the are also extraordinary. All this makes Primorye one of the unique regions of the Earth, and it undoubtedly must excite the interest of all lovers of nature and those willing to test their strength.

From 698 to 926, the Korean kingdom of occupied northern and parts of and Primorsky Krai, consisting of the above-mentioned people and the people of the recently fallen kingdom of Korea. Balhae was an early state of , which developed its industry, agriculture, animal , and had its own cultural traditions and art. People of Balhae maintained political, economic and cultural contacts with the Chinese dynasty, as well as .Fact|date=August 2008

From 1115 to 1234, the southern area of the modern was occupied by a more powerful state — The Empire, also called the Jin Dynasty. The Jurchen were a Tungusic people. stock raising and common formed their economic basis. They also developed a metallurgical industry, , and the manufacture of luxury articles. The Jin Dynasty conducted independent foreign and domestic policies. The Jurchen established close contacts with the southern Chinese dynasty, and . Having conquered northern China, the Jurchens dominated the territory for a long time.

The Jin Dynasty crumbled as a result of the invasion. The destroyed all cities, ports, and the fleet of the Jurchens. They killed, or turned into slaves most of the country's population. The survivors hid themselves from the Mongols in the forests, river valleys, and the remote reas of the and , the Okhotsky coast and parts of island. As time went on, the people forgot the trades developed by the Balhae people and the Jurchen. They got used to collecting the 's gifts, and wild animals.Fact|date=August 2008

For many centuries these rich lands, unique in the structure of flora and fauna, had not been cultivated. In the beginning of the 17th century, when the Russians first appeared in this land, the forefathers of today's small ethnic groups of the Far East were a primitive society. It should be noted that the Mongols, the invaders of the , did not settle in Primorye, but left for and the Central Asian s.

According to the of 1689 between and , lands south of the , including Primorye, were Chinese territory. However, with the weakening of the Qing Empire in the second half of the 19th century, Russia began its expansion into the area. In 1858 the towns of and were founded.

In 1858, signed the with , which was followed by the two years later. Under these treaties, the Russian-Chinese border was moved south to the and rivers. This granted possession of Primorye.

In the period from 1859 to 1882 ninety five settlements had been established in Primorye, including , , , , , , , and . The major occupations of the population were the agricultural, hunting and fishing trades, involving more than two-thirds of the territory's inhabitants.

At the end of the 19th century, the industry started developing. The territory also exported sea-kale, of young , , s, , and trepangs. Thus, it took Primorye about half a century to enter into the all-Russian economic and cultural process, and to establish close contacts with the countries of the Asian Pacific region. This was accomplished through the efforts of the territory's population, and the Russian and foreign capital inflow to the area.

From 1922, after the Civil War in Primorye ended, economic, scientific, and cultural development of the territory followed the plans of the s who had won in . During the first ten years of Soviet Power, the cultural sphere struggled against the " ". As a result , , , and in Primorye had to begin almost at the beginning, on the ruins of the pre-Revolutionary culture. The priority in economy was set on the primary industries - and in particular. and was also being developed at the time, accompanied with the intensive ports construction works. By the early 1990s the once small enterprises had developed into large companies. These are "Far Eastern Shipping Company" ("FESCO" or "DVMP"), "Dalmoreprodukt", V"ladivostok base of Trawling and Refrigerating Fleet" ("VBTRF"), Active Marine Fisheries Base of , " Mining Company", "Progress" Aircraft Works, etc. The "Fishing and Marine Transport Fleet of Primorye" had worked in all regions of the world's oceans. Numerous enterprises of the Military Industrial Complex were established in Primorye. In the 1970s, Primorye witnessed an intensive development of science. Today boasts such worldwide known scientific-research institutions as Biology and Soil Institute, The Pacific Institute of Bio-organic Chemistry, Institute of Marine Biology, The Pacific Institute of Geography, The Pacific Oceanological Institute, a total of more than 10 Institutes of Far Eastern Division of ("DVO RAN"). is also the home of the "DVO RAN" presidium.

Primorsky Krai's economy, the most balanced in the , is also the largest in absolute terms. production is the most important sector, represented mainly by . Annual catch exceeds two million s, or one half of the Russian Far East total. Second is , where half of the output is geared toward the and s. Defense is another important sector, producing naval vessels and military . The materials industry here provides for the whole Russian Far East. Lead smelting is conducted in the coastal town of .

The industry, though in , is still second only to 's with an annual yield of about 3 million cubic meters of . Primorsky Krai is the largest producer in the Russian Far East and generates more than any other Russian Far East administrative division, but power shortages are common. is also important; the Krai produces , , eggs, and s.

Primorsky Krai is the Russian Far East's and center. It has more than 100 s and affiliates and well-developed futures and s.

The Krai's proximity to Pacific Rim markets gives it an edge over most other Russian Far East administrative divisions in developing . Major trade items are products, timber products, and ferrous metals. Major trading partners are , , and .

Primorsky Krai's compact territory is well endowed with . Its density is twice the Russian average. Railroads connect it with and . , the eastern terminus of the , was surpassed as a port by the nearby - container, and terminals. Primorsky Krai-based shipping companies provide 80% of marine shipping services in the . All the Krai's significant ports are now open to international shipping.

Production of , , , and is the leading agricultural sector. The of , especially , is well developed in Primorye; a farming industry is also being developed through the establishment of and animal nurseries.

"Population": According to the (2002 Census), the population of the krai was 2,071,210, which is down from 2,258,391 recorded in the 1989 Census. Due to its geographical location, Primorsky Krai boasts a mixture of not only ethnic Russians, but also Korean, , , , , , and Taz minorities. There are emerging inter-ethnic tensions in the area as a result of Chinese migration. [ [http://www-rohan.sdsu.edu/~alexseev/ Russia In Asia ] ] This has major implications for the security of the Russian Far East, as Primorsky Krai is home to more than 50% of the population of the region.

The krai is the location of the massive , which fell February 12, 1947, in the , near the village of Paseka (approximately 440 km northeast of ).