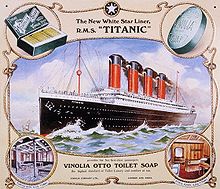 A maritime disaster is an event which usually involves a ship or ships and can involve military action. Due to the nature of maritime travel, there is often a large loss of life.

The sinking of RMS Titanic in 1912 with 1,523 fatalities, is probably the most famous shipwreck.[citation needed] The wartime sinking of the Wilhelm Gustloff during World War II, with an estimated loss of about 9,300 people in 1945 remains the greatest maritime disaster ever. In peacetime, the loss of the Doña Paz with an estimated 4,386 dead is the largest non-military loss recorded involving a single ship.

Many maritime disasters happen outside the realms of war. All ships, including those of the military, are vulnerable to problems from weather conditions, faulty design or human error. Some of the disasters below occurred during periods of conflict, although their losses were unrelated to any military action. The listing is in descending order of the magnitude of casualties suffered. 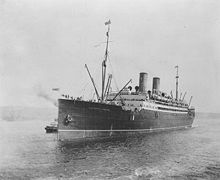 RMS Empress of Ireland in 1908

SS Admiral Nakhimov when she was known as the Berlin III

Disasters with high losses of life occur during times of armed conflict. Shown below are some of the known events with major losses.

This section lists ships that were current or former passenger ships at the time of their sinking.

During World War I

The Arandora Star, which was sunk in 1940

Cap Arcona burning shortly after the attack in May, 1945

In some cases more than one ship was lost, but they are classed as one disaster. An example of this is the Battle of Midway where four Japanese aircraft carriers were sunk. Entries are shown in descending order of lives lost.

During World War I

Takachiho on a 1905 postcard

During the Spanish Civil War

Please add the loss of HMTS "Lancastria" on the 17th June 1940 in the Loire estuary with the loss of at least 4000 lives. Still subject of a D notice. Britains largest maritime disaster ever.

HMAS Sydney with her 645 crew

During the Indo-Pakistani War of 1971

During the Falklands War