Oswego is a city in Oswego County, New York, United States. The population was 18,142 at the 2010 census. Oswego is located on Lake Ontario in north-central New York and promotes itself as "The Port City of Central New York". It is the county seat of Oswego County.

The city of Oswego is bordered by the towns of Oswego, Minetto, and Scriba to the west, south, and east, respectively, and by Lake Ontario to the north. Oswego lies within the Syracuse Metropolitan Statistical Area. Oswego Speedway is a nationally-known automobile racing facility. The State University of New York at Oswego is located just outside the city on the lake. Oswego is the namesake for communities in Montana, Oregon, Illinois, and Kansas.

The British established a trading post in the area in 1722 and fortified it with a log palisade later called Fort Oswego. In 1755 they added Fort Ontario on the northeast side of the river along with other fortifications. This strong point countered French efforts at Fort Niagara to the west.

In August 1756, French forces defeated the British in the Battle of Fort Oswego, capturing the fort during the French and Indian War. Fort Ontario was rebuilt, but Fort Oswego was only used as a cannon emplacement. During the American Revolution, American forces captured Fort Monroe, but it was retaken by the British and remained in their hands until well after the war was over. During the War of 1812, a weaker American garrison at Fort Oswego was overwhelmed by superior British forces, in order to stem the flow of supplies from the interior of New York state. Throughout the 19th Century, the U.S. military maintained a presence at Fort Ontario.

Growth of the city

Oswego was incorporated as a village on March 14, 1828,[1] and the Oswego Canal, a branch of the Erie Canal, reached the area in 1829. The city was incorporated in 1848. When the city incorporated, its area and population were removed from the figures reported for the towns. In the 1850s, at the height of a popular water-cure movement occurring in the U.S.A., in turn stimulating growth, Oswego was the home of the Oswego Water Cure establishment, which Stonewall Jackson reportedly visited in August 1850.[2]

Oswego is home to the port of Oswego and once was a major railroad hub for the New York Central, Lackawanna/Erie Lackawanna, and NY Ontario and Western railways. Three stations remain: two passenger (D&LW and NYC) and one freight (NYC) as does a rather large trestle over the Oswego River. The tunnel on a local hiking trail in the city was the north end of the NYO&W.

Oswego is located on the southeastern shore of Lake Ontario at the mouth of the Oswego River, about 35 miles north of Syracuse, New York and 69 miles east of Rochester, New York.

As Oswego is located on the eastern shore of Lake Ontario, in the center of the Snowbelt, the region often sees prodigious lake effect snow accumulations. Oswego is one of the snowiest towns in America, with some winters totaling over 300 inches. In 2007, Oswego gained national attention when approximately 130" (slightly less than 11 feet) of snow fell in a two-week timespan. This broke the record of the Blizzard of 1966, which blanketed the city with 102" of snow. As a result of this storm, the school district closed all facilities for a week, effectively shifting the planned winter holiday.

Locations and communities near Oswego

The city is governed by a Mayor and board of aldermen who are elected from the city's seven wards.

Oswego is located inside the 23rd Congressional District of New York, which is represented by Democrat Bill Owens.[5] 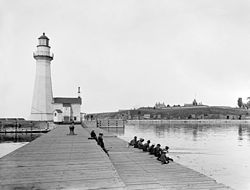 Oswego has a long history stretching back to the 15th century. Visitors can learn about the city's history by visiting museums such as the H. Lee White Marine Museum, The Richardson-Bates House, and Fort Ontario. Throughout the city and public parks, many historical monuments can be found honoring historical figures, and other forts that stood in what is now the historical district. The city includes a number of sites on the National Register of Historic Places including the Market House, Oswego Armory, Oswego City Hall, Oswego City Library, Oswego County Courthouse, Oswego Yacht Club, Tanner Block, and U.S. Customhouse.[6]

The most notable historian was Rosemary Nesbitt, who is immortalized by a monument in the city's signature public park, Breitbeck Park. Every Halloween, she would traditionally let down her long silver hair, dress in a ghostly gown, and tell ghostly haunted tales spanning across the entire history of the city. Nesbitt, who also founded the Marine Museum and wrote various books about the city's history, died on August 2, 2009 at the age of 84.[7]

Ludwig Bemelmans, the writer best known for his popular 'Madeline' stories, was stationed at Fort Ontario, Oswego, N.Y. from 1917. From this experience he wrote the book "My war with the United States" published in 1937.

Boating, fishing, and hiking are also activities that are enjoyed by residents and visitors. Oswego also has three ice-skating rinks, a large public pool located on the Fort Ontario grounds, bowling, and the historic Oswego Theater.

Every year the city hosts the Oswego Harborfest, a four-day festival of music, culture and food, centered around the Oswego Harbor, culminating in a fireworks display on the Saturday evening of the festival. The event is sponsored by local businesses, and the entertainment is mostly admission-free. The festival continues to draw approximately 150,000 to 300,000 attendees every year.

In 2007, SUNY Oswego Lakers men's hockey team won the NCAA Division III Ice Hockey Championship. Garren Reisweber's goal 12:55 into overtime gave Oswego State a 4-3 win over Middlebury on March 18, 2007. The Lakers captured the school's first ever national championship in a team sport. The 2006-07 season marked the first season Oswego played in the newly built, state-of-the-art Campus Center, located on Lake Ontario. The Campus Center replaced Romney Field House which opened in 1964, and is believed to be the first ice rink built within the State University of New York system.

The city is served by The Palladium Times newspaper, Oswego County Today, the student-run newspaper The Oswegonian, as well as OswegoNYlion and is the home to the radio stations WRVO, WSGO, WTKV (TK105), WNYO and WMVN. Oswego also has its own television station, WTOP, which is completely student-run, and is served by the Oswego High School television station, WBUC. Oswego is served by the Syracuse TV market. Previous media included the Oswego Daily Times.