Mikuma (三隈, Mikuma?) was the second vessel in the four-vessel Mogami-class of heavy cruisers in the Imperial Japanese Navy.[4] It was named after the Mikuma river in Oita prefecture, Japan.

Built under the 1931 Fleet Replenishment Program, the Mogami-class cruisers were designed to the maximum limits allowed by the Washington Naval Treaty, using the latest technology. This resulted in the choice of a 155 mm dual purpose (DP) main battery in five triple turrets capable of 55° elevation. To save weight, electric welding was used, as was aluminum in the superstructure, and the use of a single funnel stack. New impulse geared turbine engines, coupled with very heavy anti-aircraft protection, gave the class a very high speed and protection. However, the Mogami-class was also plagued with technical problems due to its untested equipment and proved to be unstable and top-heavy as well, due to cramming in too much equipment into a comparatively small hull.[4]

Mikuma was completed at Mitsubishi's Nagasaki shipyards[5] on 29 August 1935.[4]

Beginning in 1939, Mikuma was brought in for substantial reconstruction, replacing the triple 155 mm turrets with twin 203 mm guns (the 155 mm turrets going to the battleship Yamato). Torpedo bulges were also added to improve stability, but the increased displacement caused a reduction in speed.[2]

Mikuma participated in the occupation of Cochinchina, French Indochina, after Japan and Vichy French authorities reached an understanding on use of its air facilities and harbors from July 1941, from its forward operating base on Hainan. At the time of the attack on Pearl Harbor, Mikuma was assigned to cover the invasion of Malaya as part of Cruiser Division 7 under Vice Admiral Jisaburo Ozawa's First Southern Expeditionary Fleet, providing close support for landings of Japanese troops at Singora, Patani and Kota Bharu.[4]

In December 1941, Mikuma was tasked with the invasion of British Borneo, together with Mogami, covering landings of Japanese troops at Miri and Kuching.[6] In February 1942, Mikuma was tasked with covering landings of Japanese troops in Sumatra and Java.[7] On 10 February, Mikuma and Chokai were attacked by USS Searaven, which fired four torpedoes, but missed.

The Battle of Sunda Strait

At 2300 on 28 February 1942, Mikuma and Mogami, destroyer Shikinami, light cruiser Natori and destroyers Shirakumo, Murakumo, Shirayuki, Hatsuyuki and Asakaze arrived and engaged USS Houston and HMAS Perth with gunfire and torpedoes after the Allied vessels attacked Japanese transports in the Sunda Strait. At 2355, Houston scored hits on Mikuma that knocked out her electrical power, but it was quickly restored. During the battle, Mikuma lost six men and eleven others were wounded. Both Houston and Perth were sunk during the engagement, as was transport Ryujo Maru with IJA 16th Army commander Lieutenant General Hitoshi Imamura--although the general survived the sinking.[4]

In March, Mikuma and Cruiser Division 7 were based out of Singapore to cover Japanese landings in Sumatra[7] and the seizure of the Andaman Islands.[8]

From 1 April 1942 Cruiser Division 7 based from Mergui joined with Cruiser Division 4 to participate in the Indian Ocean raids. Mikuma, Mogami and destroyer Amagiri detached and formed the Southern Group, which hunted for merchant shipping in the Bay of Bengal, while Chokai, Destroyer Squadron 4's light cruiser Yura and destroyers Ayanami, Yugiri, Asagiri and Shiokaze covered the northern areas. During the operation, the "Southern Group" claimed kills on 7,726-ton British passenger ship Dardanus and 5,281-ton British steamship Ganara and the 6,622-ton British merchant vessel Indora,[9], en route from Calcutta to Mauritius.

On 22 April, Cruiser Division 7 returned to Kure, and Mikuma went into dry dock for overhaul. On 26 May, Cruiser Division 7 arrived at Guam to provide close support for Rear Admiral Raizo Tanaka's Midway Invasion Transport Group. Mikuma's crew was advised that upon the completion of the Midway operation they would proceed to the Aleutian Islands and from there to Australia.

On 5 June, Admiral Isoroku Yamamoto, CINC of the Combined Fleet ordered Cruiser Division 7 to shell Midway in preparation for a Japanese landing. Cruiser Division 7 and DesDiv 8 were 410 miles (660 km) away from the island, so they made a high-speed dash at 35 knots (65 km/h). The sea was choppy and the destroyers lagged behind. At 2120, the order was canceled. However, this dash placed Cruiser Division 7 within torpedo range of the USS Tambor, which was spotted by Kumano. Kumano signaled a 45° simultaneous turn to starboard to avoid possible torpedoes. The emergency turn was correctly executed by the flagship and Suzuya, but the third ship in the line, Mikuma, erroneously made a 90° turn. Behind her, Mogami turned 45° as commanded. This resulted in a collision in which Mogami rammed Mikuma's portside, below the bridge. Mogami's bow caved in and she was badly damaged. Mikuma's portside oil tanks ruptured and she began to spill oil, but otherwise her damage was slight. Arashio and Asashio were ordered to stay behind and escort Mogami and Mikuma. At 0534, retiring Mikuma and Mogami were bombed from high altitude by eight Boeing B-17 Flying Fortresses from Midway, but they scored no hits. At 0805, six USMC Douglas SBD Dauntless dive-bombers and six Vought SB2U Vindicators from Midway attacked Mikuma and Mogami but they did not achieve any direct hits. A Vindicator flown by Capt. Richard E. Fleming gallantly pressed home his attack despite having been set ablaze by anti-aircraft fire. He nearly scored a hit before crashing into the sea. 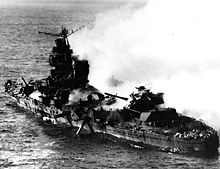 Sinking of the Mikuma at Battle of Midway

The following morning, 6 June 1942, Mikuma and Mogami were heading for Wake Island when they were attacked by three waves of 31 SBD Dauntless dive-bombers from USS Enterprise and USS Hornet. Arashio and Asashio were each hit by a bomb. Mogami was hit by six bombs. Mikuma was hit by at least five bombs in the forecastle, bridge area and amidships and set afire. The hit on the forecastle put the forward guns out of commission. The hit near the bridge area set off some AA shells and caused considerable damage to the bridge and personnel. The hit amidships set off several torpedoes and the resultant explosions destroyed the ship. Captain Sakiyama was severely wounded. Mikuma turned on her portside and sank at 29°20′N 173°30′E﻿ / ﻿29.333°N 173.5°E﻿ / 29.333; 173.5. (It has also been suggested that either Asashio or Suzuya scuttled Mikuma the following day).[4]

Asashio rescued Captain Sakiyama, who was transferred to Suzuya for medical attention, but he died 4 days later. Mogami, Asashio and Arashio rescued 240 survivors, but 650 men went down with the ship. On 9 June 1942, the submarine USS Trout rescued two survivors from Mikuma and took them as POWs to Pearl Harbor.