Great Barrier Island (often colloquially just The Barrier) is a large island of New Zealand, situated 100 kilometres (62 mi) to the north-east of central Auckland in the outer Hauraki Gulf. With an area of 285 square kilometres (110 sq mi) it is the fourth-largest island of New Zealand's main chain of islands, with its highest point, Mount Hobson, rising 621 metres (2,037 ft).[1] The local authority is the Auckland Council.

The remote island was initially exploited for its minerals and kauri trees and saw only some limited agriculture. It is now inhabited by a small population of 852 people,[2] mostly living from farming and tourism.[3] The majority of the diverse environments of the island (around 60% of the total area) is administered as nature reserve by the Department of Conservation.[1] In 2009 the island atmosphere was described as being "life in New Zealand many decades back", not without some positive emphasis.[4]

The island's European name stems from its location on the outskirts of the Hauraki Gulf. With a maximum length (north-south) of some 43 kilometres (27 mi), it and the Coromandel Peninsula (directly to its south) protect the gulf from the storms of the Pacific Ocean to the east. Consequently, the island boasts highly contrasting coastal environments. The eastern coast comprises long, clear beaches, windswept sand-dunes, and heavy surf. The western coast, sheltered and calm, is home to hundreds of tiny, secluded bays which offer some of the best diving and boating in the country. The inland holds several large and biologically diverse wetlands, along with rugged hill country (bush or heath in the more exposed heights), as well as old-growth and regenerating kauri forests.

The island received its European name from Captain Cook because it acts as a barrier between the Pacific Ocean and Gulf.[1] The Māori name is Aotea.[5]

Entrance to the Hauraki Gulf is via two channels, one on either side of the island. Colville Channel separates the island's southernmost point (Cape Barrier) from Cape Colville at the northern tip of the Coromandel Peninsula to the south, and Cradock Channel separates the island from the smaller Little Barrier Island to the west. The island protects the 'Gulf' from the ocean surface waves and the currents of the South Pacific Gyre. Note that despite its name, Great Barrier Island not a sandbar barrier which is often defined as the correct use of the term.

A kauri driving dam on Great Barrier Island, 1967. Logging was one of the early industries on the island, and this dam provided enough water to drive kauri logs 16km to the sea.

Early European interest in the island followed discovery of copper in the remote north of the island, where New Zealand's earliest mines were established at Miners Head in 1842. Traces of these mines still remain, largely accessible only by boat. Later on, gold and silver were found in the Okupu / Whangaparapara area in the 1890s, with the remains of a stamping battery on the Whangaparapara Road forming one of the remainders of this time. The sound of the battery working was reputedly audible from the Coromandel Peninsula, 20km away.[1][6]

In early 2010, a government proposal to remove 705 ha of land on the Te Ahumata Plateau (called "White Cliffs" by the locals) from Schedule 4 of the Crown Minerals Act, which gives protection from the mining of public land, was widely criticised. Concerns were that mining for the suspected $4.3 billion in mineral worth in the area would damage both the conservation land as well as the island's tourism economy. Locals were split on the project, some hoping for new jobs.[6] If restarted, mining at White Cliffs would occur in the same area it originally proliferated on Great Barrier. The area's regenerating bushland still holds numerous semi-collapsed or open mining shafts where silver and gold had been mined.[6]

The sawmill at Whangaparapa, ca 1910.

The kauri logging industry was profitable in the island's early European days and up to the mid 20th century. Forests however were well inland even though there was no easy way to get the logs to the sea or to sawmills. Kauri logs were dragged to a convenient stream bed with steep sides and a driving dam was constructed of wood with a lifting gate near the bottom large enough for the logs to pass through. When the dam had filled, which might take up to a year, the gate was opened and the logs floating above the dam were pushed out through the hole and swept down to the sea.[7] The logging industry cut down large swaths of old growth, and most of the current growth is younger native forest (around 150,000 kauri seedlings were planted by the New Zealand Forest Service in the 1970s and 1980s) as well as some remaining kauri in the far north of the island.[1][3] Today much of the island is covered with regenerating bush dominated by kanuka and kauri.[8]

The island was also the site of New Zealand's last whaling station, at Whangaparapara, which was opened only in 1956 (over a century after the whaling industry peaked in New Zealand), and was to be closed again (due to depletion of whaling stocks and increasing protection of whale species) by 1962.[1] Some remains can still be visited in the bay.

Another small-scale industry on the island was kauri gum digging, while dairy farming and sheep farming have tended to play a small role compared to the usual New Zealand practice. A local fishing industry also existed, but collapsed when international fish prices dropped.[6] In modern days, Great Barrier Islanders are generally occupied in tourism, farming or service-related industries, when not working off-island in other jobs.[6] 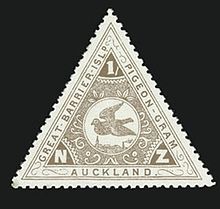 The remote north of the island was the site of the sinking of the SS Wairarapa around midnight of 29 October 1894. This tragedy was one of New Zealand's worst shipwrecks, with about 140 lives lost, some of them buried in two beach grave sites in the far north of the island.[1] As a result a Great Barrier Island pigeon post service was set up, the first message being flown on 14 May 1897. Special postage stamps were issued from October 1898 until 1908, when a new communications cable was laid to the mainland, which made the pigeon post redundant.[9] Another major wreck lies on the opposite end of the island in the far southeast, the SS Wiltshire.[1]

Over time, more and more parts of the island came under the stewardship of the Department of Conservation (DOC) or its predecessors. Partly this was land that had always belonged to the Crown, while other parts were sold or donated like the more than 10% of the island (located in the northern bush area, with some of the largest remaining kauri forests) that was gifted to the Crown by farmer Max Burrill in 1984.[1] DOC has created a large number of walking tracks through the island, some which are also open for mountain biking.[8]

Great Barrier is free of some of the more troublesome introduced pests that plague the native ecosystems of other parts of New Zealand. While wild cats, dogs, feral pigs, black rats, Polynesian rats and mice are present, the island has no known populations of possums, mustelids (weasels, stoats or ferrets), hedgehogs, brown rats or deer, thus being a relative haven for native bird and plant populations. Feral goats were eradicated in 2006.[10] Rare animals found on the island include Brown Teal ducks, Black Petrel seabirds and North Island Kākā parrots.[1][8]

Great Barrier Island in 2006 had a permanent population of around 850,[2] primarily in coastal settlements such as Tryphena, the largest settlement in Tryphena Harbour at the southern end of the island. Other communities are Okupu, Whangaparapara, Port Fitzroy, Claris and Kaitoke. There is no central power on the island, and houses require their own generators.[3] There is also extensive use of solar water heating, solar panels for electricity and wind-powered generators on the island.

The population of the island has decreased significantly in recent years, losing 1 in 6 people in just five years up to the 2006 Census[6] although house values have increased. The most significant increase in values has been at Kaitoke, where the white sandy beaches (Kaitoke and Medlands), nearby hot springs, and the central location on the island, with the adjacent airfield, have allowed for a burgeoning vacation centre. The population of the island swells substantially during the main holiday seasons, though it is still not a major tourist destination due to its relative remoteness.

The rural and remote character is also reflected in the fact that it is the Auckland Region's 'suburb' with the lowest median income, at NZ$25,100, compared to an average of NZ$37,300 and the highest value of NZ$60,000.[11] The island's population is also very old on average, with half being over 50 years old.[6]

From the end of February 2007, the island was seen around the world as the setting for the BBC One reality show, Castaway, which was filmed there for three months. 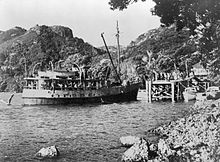 A ferry tying up at the Port Fitzroy wharf, about 1910. 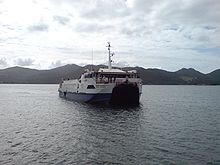 The Island Navigator vehicle ferry from Wynyard Wharf, Auckland. It takes about 4.5 hours to travel the Gulf, and transports tourists as well as locals working off-island.

There are two ferry services to Great Barrier Island. Fullers operate a fast ferry service over the summer and at long weekends. The Fullers ferry takes around two hours to Tryphena. SeaLink operates the Island Navigator, a passenger, car and freight ferry, operating from Wynyard Wharf in Auckland city to Tryphena (several times weekly) and Port Fitzroy every Tuesday. Sailing time is approximately four and a half hours.

Institutions and services are primarily provided by the Auckland Council, the local authority. Services and infrastructure like roads and ferry wharves are subsidised, with the island receiving about $4 in services for every $1 in rates.[6]

There are three primary schools on the island, but no secondary schools, so students either leave the island for schooling on the mainland, or do their studies via the New Zealand Correspondence School. The lack of secondary schooling has been blamed as one of the reasons for a slow exodus of long-term Great Barrier-resident families.[12]

Although technically part of Auckland, a certain relaxation in some of the rules governing daily activities and applicable standards for civic works and services exists, shared with some of the other inhabited islands of the Hauraki Gulf.

For example, every transport service operated solely on Great Barrier Island, the Chatham Islands, or Stewart Island/Rakiura is exempt from section 70C of the Transport Act 1962 (the requirements for drivers to maintain driving-hours logbooks). Drivers subject to section 70B must nevertheless keep records of their driving hours in some form.[13]