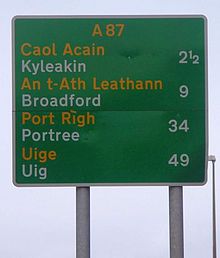 A bilingual road sign to the Isle of Skye, Scotland, with distances in miles and the wording in both Scottish Gaelic and English.

A mile is a unit of length, most commonly 5,280 feet (1,760 yards, or about 1,609 metres). The mile of 5,280 feet is sometimes called the statute mile or land mile to distinguish it from the nautical mile (1,852 metres, about 6,076.1 feet).[1] There have also been many historical miles and similar units in other systems that may be translated as miles in English; they have varied in length between one and 15 kilometres.

Use of the mile as a unit of measurement is now largely confined to the United Kingdom[2] and the United States.[3]

Various historic miles/leagues from a German textbook dated 1848 (given in feet, metres and fractions of a meridian

The Romans were first to use the unit of long distance mille passuum (literally "a thousand paces" in Latin, where each pace was two steps). It denoted a distance of 1,000 paces or 5,000 Roman feet, and is estimated to be about 1,479 metres (1,617 yards). This unit, now known as the Roman mile,[6] spread throughout the Roman Empire, often with modifications to fit local systems of measurements.

Historical miles in the Arabic world and Europe

Historical miles in Britain and Ireland

The statute mile (1592) of Elizabeth I was not the only definition of the mile in Britain and Ireland. Perhaps the earliest tables of English linear measures, Arnold's Customs of London (c. 1500) indicates a mile consisted of 8 furlongs, each of 625 feet, for a total of 5000 feet (1666⅔ yards, 0.947 statute miles, 1524 metres):[12] this is the same definition of the mile in terms of feet as used by the Romans. The "old English" mile of medieval and early modern times appears to have measured about 1.3 statute miles (1.9 km).[13] The 17th century cartographer, Robert Morden, had multiple scales on his maps—for example, his map of Hampshire showed two different miles that had a ratio of 1 : 1.23[14] and his map of Dorset had three scales with a ratio of 1 : 1.23 : 1.41.[15] In both cases, the smallest mile appears to be the statute mile. 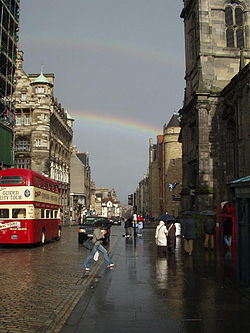 The Royal Mile in Edinburgh is roughly a Scots mile long.

The Royal Mile in Edinburgh, i.e., from the Castle down to Holyrood Abbey, is approximately the same length as the Scots mile.[16] English miles were imposed in 1824 by an Act of Parliament.

"While we sit bousing at the nappy,
An' getting fou and unco happy,
We think na on the lang Scots miles,
The mosses, waters, slaps and stiles,
That lie between us and our hame,
Where sits our sulky, sullen dame,
Gathering her brows like gathering storm,
Nursing her wrath to keep it warm."

The Scots mile was longer than the English mile, but varied in length from place to place.[17] It was formally abolished by an Act of the Parliament of Scotland in 1685,[18] and again by the Treaty of Union with England in 1707,[19] but continued in use as a customary unit during the 18th century. It was obsolete by the time of its final abolition by the Weights and Measures Act 1824.[17] An estimate of its length can be made from other Scots units: in Scots, the rod was usually called the fall or faw, and was equal to six ells of 37 inches.[20] As there are 320 rods in a mile and 1.0016 Imperial inches in a Scots inch, this would make the Scots mile equal to 5,920 Scots feet (1,976.5 imperial yards, 1.12 statute miles). Other estimates are similar.[12] [21]

From 1774, through the 1801 union with Britain, until the 1820s, the grand juries of 25 Irish counties commissioned surveyed maps at scales of one or two inches per Irish mile.[25][26] Scottish engineer William Bald's County Mayo maps of 1809–30 were drawn in English miles and rescaled to Irish miles for printing.[27] The Howth–Dublin Post Office extension of the London–Holyhead turnpike engineered by Thomas Telford had mileposts in English miles.[28] Although legally abolished by the Weights and Measures Act 1824, the Irish mile was used till 1856 by the Irish Post Office.[29] The Ordnance Survey of Ireland, from its establishment in 1824, used English miles.[30]

In 1894, Alfred Austin complained after visiting Ireland that "the Irish mile is a fine source of confusion when distances are computed. In one county a mile means a statute mile, in another it means an Irish mile".[31] When the Oxford English Dictionary definition of "mile" was published in 1906,[32] it described the Irish mile as "still in rustic use".[4] A 1902 guide says regarding milestones, "Counties Dublin, Waterford, Cork, Antrim, Down, and Armagh use English, but Donegal Irish Miles; the other counties either have both, or only one or two roads have Irish".[33] Variation in signage persisted till the publication of standardised road traffic regulations by the Irish Free State in 1926.[34] In 1937, a man prosecuted for driving outside the 15-mile limit of his licence offered the unsuccessful defence that, since the state was independent, the limit ought to use Irish miles, "just as no one would ever think of selling land other than as Irish acres".[35] A 1965 proposal by two TDs to replace statute miles with Irish miles in a clause of the Road Transport Act was rejected.[36] The term is now obsolete as a specific measure,[37] though an "Irish mile" colloquially is a long but vague distance akin to a "country mile".[38]

The statute mile was so-named because it was defined by an English Act of Parliament in 1592, during the reign of Queen Elizabeth I. It was defined as being 1,760 yards (5,280 feet, about 1609 metres).[12] For surveying, the statute mile is divided into eight furlongs; each furlong into ten chains; each chain into four rods (also known as poles or perches); and each rod into 25 links. This makes the rod equal to 5½ yards or 16½ feet in both Imperial and US usage.

The exact conversion of the mile to SI units depends on which definition of the yard is used. Different English-speaking countries maintained independent physical standards for the yard that were found to differ by small, but measurable, amounts and even to slowly shorten in length.[39] The US redefined the US yard in 1893, but this resulted in US and Imperial measures of distance having very slightly different lengths. The difference was resolved in 1959 with the definition of the international yard in terms of the metre by Australia, Canada, New Zealand, South Africa, the UK and the US.[40] The "international mile" of 1,760 international yards is exactly 1,609.344 metres.[41]

The difference from the previous standards was 2 ppm, or about 3.2 millimetres (⅛ inch) per mile. The US standard was slightly longer and the old Imperial standards had been slightly shorter than the international mile. When the international mile was introduced in English-speaking countries, the basic geodetic datum in North America was the North American Datum of 1927 (NAD27). This had been constructed by triangulation based on the definition of the foot in the Mendenhall Order of 1893, with 1 foot = 1200⁄3937 metres and the definition was retained for data derived from NAD27, but renamed the US survey foot to distinguish it from the international foot.[42]

The US survey mile is 5280 survey feet, or about 1609.3472 metres.[43] In the US, statute mile formally refers to the survey mile,[44] but for most purposes, the difference between the survey mile and the international mile is insignificant—one international mile is exactly 0.999998 of a US survey mile—so statute mile can be used for either. But in some cases, such as in the US State Plane Coordinate Systems (SPCSs), which can stretch over hundreds of miles,[45] the accumulated difference can be significant, so it is important to note that the reference is to the US survey mile.

The old Imperial value of the yard was used in converting measurements to metric values in India in a 1976 Act of the Indian Parliament.[46] However, The current National Topographic Database of the Survey of India is based on the metric WGS-84 datum,[47] which is also used by the Global Positioning System.

The term metric mile is used in sports such as track and field athletics and speed skating to denote a distance of 1500 metres (about 4921 ft). In United States high school competition, the term is sometimes used for a race of 1,600 metres (about 5249 ft).[48] 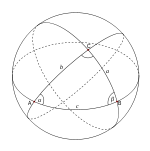 On the utility of the nautical mile
Each circle shown is a great circle– the analog of a line in spherical trigonometry– and hence the shortest path connecting two points on the globular surface. Meridians are great circles that pass through the poles.
Main article: Nautical mile

The nautical mile was originally defined as one minute of arc along a meridian of the Earth.[49] Navigators use dividers to step off the distance between two points on the navigational chart, then place the open dividers against the minutes-of-latitude scale at the edge of the chart, and read off the distance in nautical miles.[50] The Earth is not perfectly spherical but an oblate spheroid, so the length of a minute of latitude increases by 1% from the equator to the poles. Using the WGS84 ellipsoid, the commonly accepted Earth model for many purposes today, one minute of latitude at the WGS84 equator is 6,046 feet and at the poles is 6,107.5 feet. The average is about 6,076 feet (about 1,852 metres or 1.15 statute miles).

The nautical mile per hour is known as the knot. Nautical miles and knots are almost universally used for aeronautical and maritime navigation, because of their relationship with degrees and minutes of latitude and the convenience of using the latitude scale on a map for distance measuring.

The data mile is used in radar-related subjects and is equal to 6,000 feet (1.8288 kilometres).[52] The radar mile is a unit of time (in the same way that the light year is a unit of distance), equal to the time required for a radar pulse to travel a distance of two miles (one mile each way). Thus, the radar statute mile is 10.8 μs and the radar nautical mile is 12.4 μs.[53]

There have been several abbreviations for mile (with and without trailing period): mi, ml, m, M. In the United States, the National Institute of Standards and Technology now uses and recommends mi,[54] which avoids confusion with metres, millilitres, etc., but in everyday usage (at least in the United States and in the United Kingdom), units such as miles per hour and miles per gallon are almost always abbreviated as mph or mpg (rather than mi/h or mi/gal).

Cities in the continental United States often have streets laid out by miles. Detroit, Indianapolis, Chicago, Phoenix, Philadelphia, Las Vegas, Los Angeles, and Miami, are several examples. Typically the largest streets are about a mile apart, with others at half-mile and quarter-mile intervals.[citation needed] In the Manhattan borough of New York City "streets" are close to 20 per mile, while the major numbered "avenues" are about six per mile. (Centerline to centerline, 42nd St to 22nd St is supposed to be 5250 feet while 42nd to 62nd is supposed to be 5276 ft 8 in.)[citation needed]

Even in English-speaking countries that have moved from the Imperial to the metric system (for example, Australia, Canada, and New Zealand), the mile is still used in a variety of idioms. These include: