Manhattan Beach is a beachfront city located in southwestern Los Angeles County, California, USA. Its population was 35,135 at the 2010 census, up from 33,852 at the 2000 census. The city is on the Pacific coast, south of El Segundo, and north of Hermosa Beach. Manhattan Beach is the home of both beach and indoor volleyball, and surfing. During the winter, the waves can get as big as 12 feet (3.7 m). It is one of the three Beach Cities in the South Bay.

Manhattan Beach is an affluent beach town within commuting distance of Los Angeles and therefore it is one of the most expensive coastal towns in which to live in America, according to the most recent Fortune Magazine rankings. The median price of a single family dwelling greatly exceeds the already high Los Angeles County median price by well over 100%. Property in Manhattan Beach is exceptionally expensive when considering the size of land for sale. In comparison, a half acre of land in Bel-Air is valued at $20 million, while a half acre of land on the Strand in Manhattan Beach is valued at $35 million.[7] Homes with an ocean view often exceed $5 million in cost.

Manhattan Beach and the local high school, Mira Costa High School, were the real-life film locations for the popular TV show The O.C.[8][9]

In 1863, a Scottish immigrant, Sir Robert Burnett, purchased Rancho Sausal Redondo and Rancho Aguaje de la Centinela from Avila's heirs for $33,000. Ten years later in 1873, Burnett leased the ranch to a Canadian, Daniel Freeman (not the American Daniel Freeman, who was the first to file a claim under the Homestead Act of 1862). Burnett returned to Scotland. Freeman moved his wife and three children onto the ranch and started growing various crops. On May 4, 1885 Freeman bought the ranch from Burnett for $140,000.

George H. Peck owned a lot of the land that became part of the north section of Manhattan Beach. Supposedly, a coin flip decided the town's name. Around 1902, the beach suburb was named "Manhattan Beach" after the developer's home town, Manhattan Beach, Brooklyn, New York.[10]

The city has a total area of 4.9 square miles (13 km2). Manhattan Beach features 2.1 miles (3.4 km) of ocean frontage. Much of Manhattan Beach was once sand dunes. The city is quite hilly, but the only remaining sand dune is at Sand Dune Park. 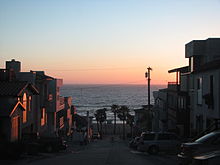 A view of the ocean in Manhattan Beach.

The Hill Section includes higher priced homes where many of the residences are remodeled and situated on steep hills allowing panoramic ocean and city views.

The nearby Sand Section is notable for its pockets of quiet neighborhoods adjacent to the ocean. Multi-million dollar ocean-front homes line the bike path and walking lane along The Strand.

"Downtown" Manhattan Beach runs along Manhattan Beach Boulevard and the streets perpendicular to it in the area near the Manhattan Beach Pier up to Valley Drive. There are restaurants and stores and a mixed-use center, where once the pottery factory, famous for its colorful plates, stood for decades. The Metlox site closed in the early 1990s, and it took several years for the contaminated soil to be removed. The new "Metlox" site includes a boutique hotel and a few restaurants and shops.

The Manhattan Beach Library is near downtown on Highland Avenue two blocks north of Manhattan Beach Boulevard. The library is part of the County of Los Angeles Public Library system, and includes internet accessible computers, WiFi, and access to the six million items in the county library collection.

The Rosecrans strip is located on the south side of Rosecrans Avenue, east of Sepulveda, and west of Aviation.

The area includes the small Manhattan Village Mall, which is located on the southeast corner of Sepulveda Boulevard and Rosecrans Avenue. The mall, built in the early 1980s, was once anchored by the department stores Bullock's and Buffums, which both went bankrupt in the early 1990s. Most of the original stores in the mall also went bankrupt in the 1980s and 1990s (Miller's Outpost, Contempo Casuals, Music Plus, Orange Julius, Tequila Willies, Kinney Shoes, B. Dalton bookstore). The mall was remodeled in the late 1990s and early 2000s, and is now anchored by Macy's on both ends. It also has higher-end stores such as Pottery Barn, Pottery Barn Kids, and Williams and Sonoma.

The Manhattan Beach Country Club, the Marriott Hotel and Golf Course, restaurants, retail stores, supermarkets, and shopping centers are along the strip between the Manhattan Mall and Aviation Boulevard.

The "Sepulveda Strip" occupies the commercial zone, which runs north-south through the city. There is often very heavy traffic on this main thoroughfare.

The Aviation Strip is located along Aviation Boulevard (the city's eastern boundary), south of Rosecrans Avenue, and north of Marine Avenue. Aviation High School once stood there until it was closed in the early 1980s.[11] The zone includes several major complexes, including the Manhattan Beach Film Studios and the Northrop Grumman Space Technology Plant (where TRW once stood).[12]

In February 2006, the median price of Manhattan Beach home sales was $1,925,000.[16] In its "Best Places to Live" 2005 feature, Money Magazine ranked Manhattan Beach as the fourth most expensive beach town in America.[17] Additionally, in 2005 it ranked 2nd in California for the number of million-dollar homes sold.[18] Forbes has also ranked the local ZIP code 90266 as the 29th most expensive ZIP code in North America.

According to the City's 2010 Comprehensive Annual Financial Report,[19] the top employers in the city are:

In the California State Senate, Manhattan Beach is located in the 28th District. The current State Senator is Ted Lieu.

In the California State Assembly, Manhattan Beach is located in 53rd District. The current State Assemblyman from the District is Democrat Betsy Butler.

The district as a whole received a score of 926 on the 2010 California Academic Performance Index, making it California's 3rd best performing district.[21] Each individual school also ranks at the top of its respective category.[22]