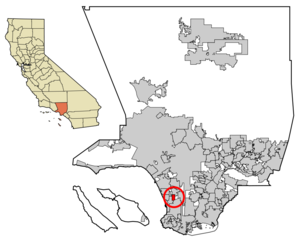 From the 1780s onward, the area that is now Lawndale was part of the "", a given by the Spanish colonial government that includes much of what is now the South Bay region. In 1905 first subdivided the area and named it after a suburb. Lots sold slowly and different promotions were tried such as promoting Lawndale as a chicken raising area. The first railway to run through Lawndale was the Inglewood Division of the Redondo Railway which would later become part of the "Red Car" system. It ran down the middle of Railway Ave. (now Hawthorne Blvd.) until 1933. In 1927 the Santa Fe railroad arrived. After , the immense demand for housing from returning veterans and California newcomers resulted in Lawndale's formation as a . In 1959 it was incorporated as a city.

Starting in the 1970s Lawndale's relatively low housing prices but less desirable location relative to its neighboring cities attracted s and a substantial portion of its residents increasingly became renters.

For a time in the 1980s, with new cycle of expansion of nearby, many young people who wished to live in the Beach Cities found that they simply could not afford to do so, and settled in less glamorous inland cities such as Lawndale. But with the contraction of this industry after the , Lawndale reverted back to its previous pattern. Lawndale has attempted to attract more owner/residents, as well as tourists with the 2003 completion of an project along the city's stretch of Hawthorne Boulevard (State Route 107), a major South Bay thoroughfare. This project called "Beautify Lawndale" has been an ongoing one that has cost the city several million dollars, and also yielded the new digital billboard located on Inglewood Ave.

The billboard for its first 18 months was sponsored by Fox and promoted upcoming television shows and movies under the Fox label, but according to the director of Payroll for Fox Studios the ad campaign was removed due to, in their words, "Lawndale being too small of a city to warrant the costs". It also later gained and lost a sponsorship with Toyota, and now it is simply a huge white board, with the digital section underneath promoting local businesses.

[http://www.echsonline.org/] is a in Lawndale.

Lawndale is bordered by Redondo Beach on the West and Southwest, Hawthorne on the North, Torrance on the Southeast, and of El Camino Village (also know as Alondra Park) on the East.