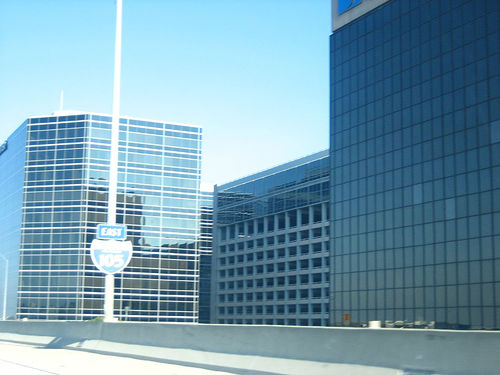 imagesize =
image_caption = The El Segundo skyline, as seen from the Century Freeway (I-105) 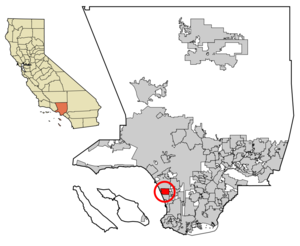 The area was once a part of and later became "" ("Round Willow Patch Ranch"). The most common story of how the city received its current name is that it became the site of the second ("el segundo" in Spanish) refinery on the West Coast in 1911. [cite web | url = http://elsegundobusiness.com/about_hist_tline.htm | title = El Segundo - Timeline] In 2006, El Segundo won an Eddy award for being the most business friendly city in Los Angeles county. [cite web | url = http://www.laedc.org/eddy/2006_Eddy_BL.pdf | title = LAEDC 2006 Eddy Awards] [cite web | url = http://www.laedc.org/newsroom/businessleader/BusinessLeader_200607_Winter.pdf | title = LAEDC Press Release] El Segundo is in transition from being a Caucasian, blue-collar 'company town' to being a 'corporate' town where the tax base relies on a non-resident working population. Pollution and toxic waste cleanup remain issues as El Segundo restores industrial sites to shopping malls and sports facilities. The north and south boundaries of the town are the LAX airport and prosperous Manhattan Beach with the Pacific as the western boundary. The most prominent feature of the town is the massive oil refinery which borders the town center and the massive sewage treatment facility on the west side of the town. Office towers are not a prominent feature of this town from any but a very select vantage point (the towers are no longer occupied by Hughes although the helipad #1 remains in place.) Aircraft noise from LAX is a major issue for residents on the north side of El Segundo. The town's decision to destroy vast numbers of Ficus trees remains very controversial: the trees can still be found near the city hall where they offer abundant shade. The trees were blamed for the high cost of sidewalk repairs in the town. Residents are currently active in tree-planting along .

There were 7,060 households out of which 28.1% had children under the age of 18 living with them, 41.5% were married couples living together, 10.0% had a female householder with no husband present, and 44.6% were non-families. 34.3% of all households were made up of individuals and 7.5% had someone living alone who was 65 years of age or older. The average household size was 2.27 and the average family size was 3.00.

The serves western El Segundo. The school district is listed as one of the state's 29 academic outperformers by Standards and Poor's in 2005.
*
*

Eastern El Segundo is served by the and the .

is partially located in El Segundo, including the only on the beach in .

is located immediately to the north of El Segundo.

*El Segundo is home to the Los Angeles Lakers practice facility.
*The hip hop group wrote the song "," which was included on their 1990 album "". The elderly landlady ( as Marva Munson) in "The Ladykillers" repeatedly complained about the inanity of this lyric.
*The singer sings a reference to "I left my wallet in El Segundo" in his song .
*The city is referenced in post-hardcore band 's song "Everything You Ever Wanted to Know About Silence" from their debut album of the same name.
*Besides mentioning Watts, often referred to El Segundo on the 1972 hit TV show "". In one episode, he refers to his Ripple wine as coming from "the vineyards of El Segundo. He was also thrown off a bridge by a bigot in El Segundo"
*The alternative ending of "" states that subsequent to the crash-landing of Dr. Evil's rocket, Dr. Evil found work as the night manager of a Big Boy restaurant in El Segundo, though one does not nor ever did once exist in the city.
*The movie "" was filmed in El Segundo, in front of the ice cream parlor formerly known as Scoops which closed down due to a drug bust, it then was turned into Lickity-Split, but it is now a different restaurant.
*The beginning of the video of their song "First Date" lists El Segundo, 1974 as its location.
* has been featured in many films and television shows, including "", "", "", "", "", "", "Yours, Mine and Ours", "", "24", "", "", "", "", "" and many others. Some promotional T-shirts sold in El Segundo claim that El Segundo High School has appeared in more films and TV shows than any other high school.
* mentioned El Segundo on "".
* An episode of "Bones" was filmed at the water treatment facility which lies on El Segundo's West border.
* Many years ago a Ripley's Believe It Or Not newspaper item suggested that El Segundo was one of the few U.S. cities where every street had a hill. However, that is only true of the western residential area of the city.
*"" is filmed in parts of El Segundo.The show Medium was filmed at El Segundo Middle School