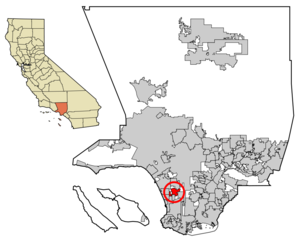 The (, I-105) runs along the northern boundary of Hawthorne, with the line running down the center of the Century Freeway. The (I-405) runs along the western boundary of Hawthorne. Major east-west streets in Hawthorne include Rosecrans Ave., El Segundo Ave.. and . Major north-south street include Aviation Blvd., Inglewood Ave., Hawthorne Blvd., Prairie Ave., Crenshaw Blvd., and Van Ness Ave.

There were 28,536 households out of which 43.7% had children under the age of 18 living with them, 38.6% were married couples living together, 23.5% had a female householder with no husband present, and 30.7% were non-families. 24.5% of all households were made up of individuals and 4.5% had someone living alone who was 65 years of age or older. The average household size was 2.93 and the average family size was 3.50.

Hawthorne is known to fans as the home of Brian, Carl, and of the . The Wilson brothers' boyhood home was demolished in the late 1980s during the construction of the , although it was honored by the dedication of the (California Landmark 1041) in May 2005.

is a charter high school in Hawthorne associated with the . [http://www.hawthorne.k12.ca.us/Schools/HMSA/indexHMSA.htm]

;
* (in an unincorporated area in Los Angeles County)

* has its headquarters near Hawthorne Municipal Airport.
* shopping center
* - the headquarters of Mattel was, for a long time, located in Hawthorne, but is now in nearby El Segundo.