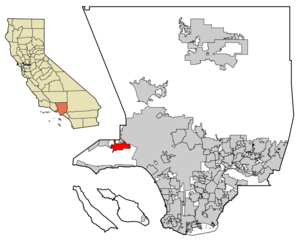 , the structure on 23537 Calabasas Road, dates from 1844 and is one of the oldest buildings in the greater LA area. [cite web|url=http://you-are-here.com/building/leonis_adobe.html|title=Los Angeles architecture photo gallery] An extensive 2006 Secondhand Smoke Control Ordinance [ [http://www.cityofcalabasas.com/secondhandsmoke.html Secondhand Smoking Ordinance ] ] caused the city to receive international attention.Fact|date=July 2008

It is generally accepted that Calabasas means "pumpkin," "squash," or "gourd," derived from the Spanish "calabaza". Some historians hold the theory that Calabasas is a translation of the Chumash word "calahoosa."

The City's official logo, depicting the red-tailed hawk flying over the Santa Monica Mountains, symbolizes a commitment to preserving the community's natural beauty and semi-rural quality of life. The City logo is featured on the Calabasas City flag which is flown in front of City Hall and hangs in the City Council Chambers.

Vista Pointe is located along the transverse ranges that run parallel to and in between the 101 Freeway and Parkway Calabasas Road.

In July 2008 under the financial leadership of Dr. Gary Lysik, Chief Financial Officer for Calabasas, the City completed construction of a brand new civic center and library complex. Located at 100 Civic Center Way, the two building complex is the first municipal-owned and constructed 'green' civic center structure in the state of California. It is estimated that the complex cost approximately $45,000,000 to complete. This figure includes the outright purchase of the land on which the complex sits.

[http://www.cityofcalabasas.com/recreation/brandons.html Brandon’s Village] is a universally accessible playground at Gates Canyon Park in Calabasas that serves over 5,000 special needs children from Calabasas and the surrounding communities. Designed by Shane’s Inspiration, a non-profit organization that designs and builds universally accessible playgrounds, [http://www.cityofcalabasas.com/recreation/brandons.html Brandon’s Village] is about one acre in size and all playground equipment is over 70% independently playable for children with disabilities and will also provide meaningful and stimulating play opportunities for able-bodied children. [http://www.cityofcalabasas.com/recreation/brandons.html Brandon’s Village] opened in 2006 thanks to a generous donation from the Friedman Charitable Trust.

Safeguarding the environment and the protection of open space has been a longstanding priority for the residents of Calabasas. Calabasas played a vital role in the 10-year battle to save Ahmanson Ranch, a convert|2983|acre|km2 property in the Simi Hills in Ventura County nestled at the western edge of the San Fernando Valley, from development. The land was sold by Seattle-based Washington Mutual to the Santa Monica Mountains Conservancy in late 2003 for $150 million. Ahmanson Ranch is now known as the [http://www.lamountains.com/parks.asp?parkid=28 Upper Las Virgenes Canyon Open Space Preserve] and is protected from further development.

Calabasas voters overwhelmingly passed [http://www.cityofcalabasas.com/election2005/Special-Election/R2005-954%20Open%20Space%20-%20Adopted%20ordinance.pdf Measure D] in 2005. The ordinance protects and preserves the existing areas of Open Space in Calabasas by requiring two-thirds voter approval before any land in the City designated as Open Space may be redesignated for another use.

During the , a number of technology companies appeared on a stretch of Agoura Rd. parallel to the 101 Freeway, leading that area of Calabasas to develop a reputation as the "101 Technology Corridor". These businesses included computer-networking companies (later ), (later Spirent Communications}, Ixia Communications, , and , as well as video-game publisher , and software companies and . [http://www.johnston-group.com/corporate_center.asp] [http://www.klinehawkes.com/news/OvertureFast50.pdf] [http://findarticles.com/p/articles/mi_m5072/is_n46_v13/ai_11802884] [http://www.larta.org/pl/NewsArticles/02_04_15_LATIMES_101Corridor.htm] Although some of these companies have since relocated, been acquired, or ceased their operations, the area continues to be home to a significant technology presence.

In February 2006, under the leadership of then-Mayor Barry Groveman, Calabasas enacted the [http://www.cityofcalabasas.com/secondhandsmoke.html Comprehensive Secondhand Smoke Control Ordinance] which prohibits smoking in all public places in the City of Calabasas where other persons can be exposed to second-hand smoke. These places include indoor and outdoor businesses, hotels, parks, apartment common areas, restaurants and bars where people can be reasonably expected to congregate or meet. Under the law, smoking outside in public areas within the city is restricted to select "Designated Smoking Areas." The law went into effect in , , garnering much local and national media attention. The full text of the ordinance may be found at Calabasas' official website. [http://www.cityofcalabasas.com/pdf/agendas/council/2006/021506/item2-O2006-217.pdf]

The Comprehensive Second-Hand Smoke Control Ordinance has been expanded in the beginning of 2008 requiring 80% of rental apartment buildings to be permanently designated as non-smoking units by January 1, 2012.

The city is located at the northwestern part of the and comprises a portion of the . It is convert|22|mi|km away from Downtown Los Angeles. It is bordered by the Woodland Hills area of Los Angeles to the northeast, Topanga to the southeast, Malibu to the south, Agoura Hills to the west, and Hidden Hills to the north. The historic El Camino Real runs east-west through Calabasas as .

Calabasas is often considered similar to its neighboring two cities to the east, Woodland Hills and Topanga, because of similar demographics, size, geography, and low-density general plans. Calabasas is unique from these two for its extensively developed independent infrastructure.

During hot seasons of the year, the weather is almost always 6-8 °F cooler in the city of Calabasas compared to the bordering community of Woodland Hills because the Calabasas Hills form a barrier against the heat of the , and nearby canyons funnel cool air to the area from the .

Part of the city, near Calabasas High School, has all of its streets named patriotically. There is Declaration Ave., America Way, Liberty Bell St., Paul Revere Dr., Founder's Dr., etc.

One of the oldest neighborhoods in Calabasas is Park Moderne, or the Bird Streets. A former artist colony, remnants remain of the club house, pool and cabins scattered across streets with bird names, such as Meadow Lark, Blackbird, Bluebird and Hummingbird.

The city, much like some surrounding areas and into parts of the West San Fernando Valley, has a concentration of s and Persians. Many of the people of the two ethnic groups mentioned are second and third-generation Americans.

There were 8,350 households out of which 44.4% had children under the age of 18 living with them, 64.3% were married couples living together, 9.0% had a female householder with no husband present, and 23.3% were non-families. 17.0% of all households were made up of individuals and 4.1% had someone living alone who was 65 years of age or older. The average household size was 2.76 and the average family size was 3.14.

Calabasas residents are zoned to schools in the .

It is known among long-time residents that the infamous attended and graduated from the local high school, Calabasas High School, prior to moving to Beverly Hills.

Between the years of 1997 and 2001 [http://calabasashigh.com/ Calabasas High School] had hired a new principal at the beginning of every school year.

In January 2004, A. C. Stelle Middle School was opened on the corner of and Paul Revere Ave.

Calabasas is also home to the private [http://www.viewpoint.org/ Viewpoint School]

*, "Stuttering John" from , and announcer for
*, star of
* and , Lead singer and drummer of the alternative rock band .
* drummer of the winning
*, actress, well known for playing in .
*, basketball player for the Los Angeles Lakers
*, drummer of , and many other bands
*, writer
*, writer
*, Actress, Movie, The Good Witch, TV Series , currently starring in
* and , bassist and drummer of
*, mother of children