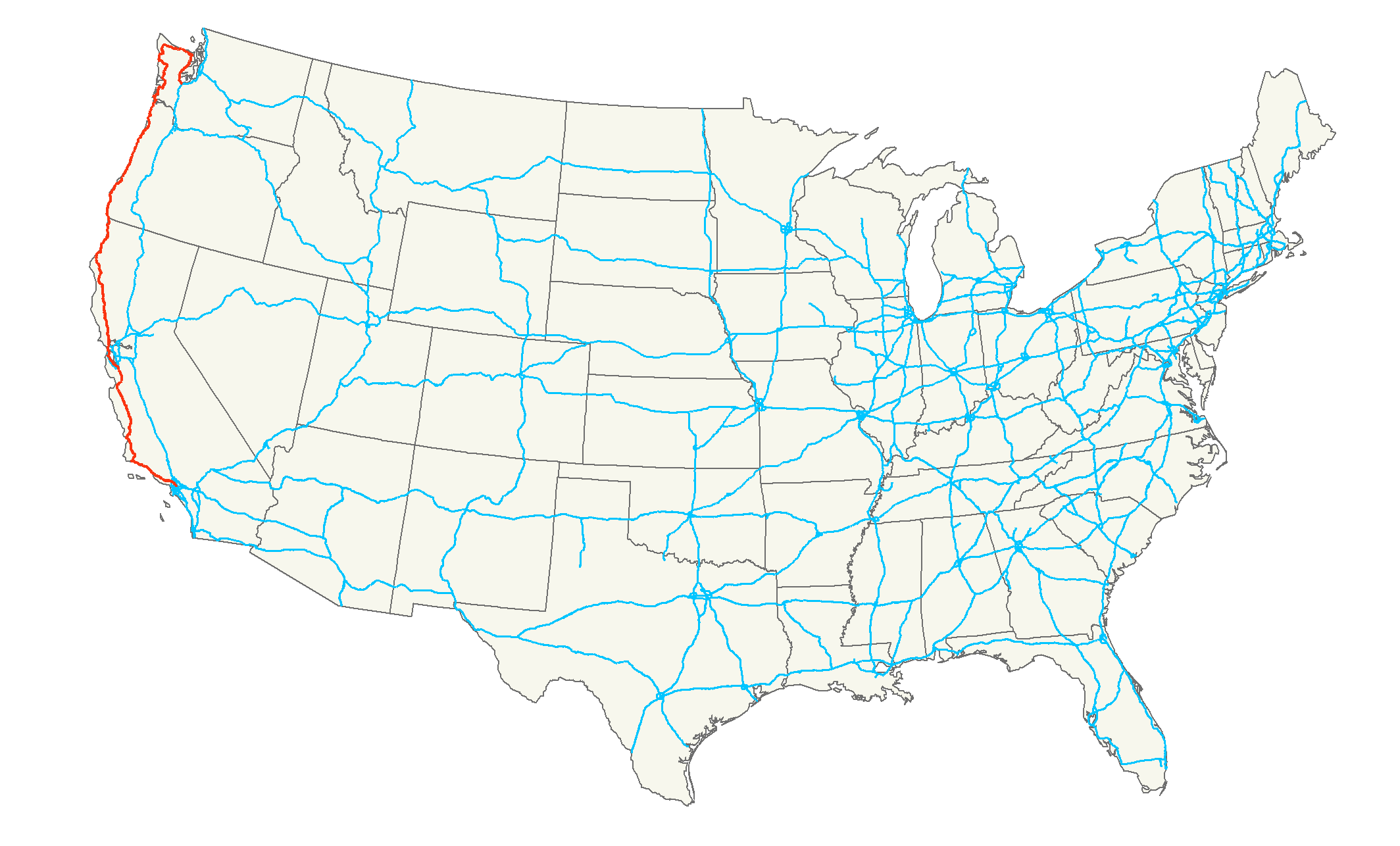 U.S. Route 101, or U.S. Highway 101, is a running north-south through the states of California, Oregon, and Washington, on the far . It is also known as "(The Royal Road)" where its route along the southern and central California coast approximates the old trail which linked the Spanish missions, pueblos and presidios. It merges at some points with California Route 1.

According to the AASHTO's numbering scheme for U.S. Highways, three-digit route numbers are generally subsidiaries of two-digit routes. However, the principal north-south routes were assigned numbers ending in 1. Rather than lose four available north-south numbers (93, 95, 97, and 99) or assign the primary west coast highway a "lesser" number, the AASHTO made an exception to its two-digit rule. Thus, U.S. 101 is treated as a primary, two-digit route with a "first digit" of 10, rather than a spur of U.S. 1. Thus U.S. Route 101, not U.S. 99, is the westernmost north-south route in the U.S. Highway system.

U.S. Route 101 was once the major north-south link along the Pacific coast. North of San Francisco, it has been replaced in importance by the highways of the System, specifically , which is more modern in its physical design. Route 101 is still in use as a parallel freeway or highway between Los Angeles and San Francisco, and is an alternative to the Interstate for most of its length. In 1964, California truncated its southern terminus in Los Angeles, as Interstate 5 replaced it. The old road is known as county road S-21 or Historic Route 101 in northern San Diego County.

The highway's "northern" terminus is in Olympia, , though the northernmost point on the highway is in Port Angeles. The southern terminus of U.S. 101 is in Los Angeles, at the , the world's busiest freeway interchange. [ [http://www.scvresources.com/highways/east_los_angeles_interchange.htm East Los Angeles Interchange ] ]

U.S. Route 101 may be called the "Oregon Coast Highway" in , and the "Pacific Highway" in parts of . It is also called "The 101" by residents of or simply "101" by residents of , , and . From north of San Francisco and continuing to Oregon it is also referred to as the "". Urban portions of the route in Southern California are named the , , and at various points between and [ [http://www.dot.ca.gov/hq/tsip/hseb/products/Named_Freeways.pdf 2007 Named Freeways, Highways, Structures and Other Appurtenances In California] ] . Urban portions of the route in the Bay Area are called the James Lick Freeway, , and . A portion of the route north of is named Sig Sanchez Highway. Street routings in San Francisco are more commonly referred to by their street names rather than the route number. Portions of the route between Southern California and the Bay Area are named El Camino Real or El Camino Real Freeway, but such names are rarely used colloquially in lieu of the route number.

In Southern California, the highway is a heavily traveled route serving the Northwest portion of the area; this includes communities in the West and in the , along with communities in the East and . The route is the Santa Ana Freeway from East Los Angeles to . It becomes the Hollywood Freeway north from Downtown Los Angeles through the , before turning west and becoming the Ventura Freeway. Communities along the alignment include and the southern edge of the , and the cities of Hidden Hills, Calabasas, Agoura Hills, Westlake Village, Thousand Oaks (includes Newbury Park), Camarillo, Oxnard, Ventura, and Santa Barbara. US 101 also integrates with the southern part of the historic El Camino Real.

before reaching the Oregon State Line.

Unlike Washington, California does not sign the long east-west section of U.S. 101 between and its junction with California State Route 134 and 170 in North Hollywood as "West" and "East." Instead, Caltrans observes the overall direction of the highway and marks these portions as "North" and "South". Local references to this potion of the freeway, including traffic reports, refer to the directions on this section as east for southbound lanes and west for northbound lanes. In the late 90s, Caltrans began placing guide signs on local streets in the adjacent to the 101 which identified eastbound and westbound entrances to the freeway. Other than replacing older guide signs which previously referenced the official northbound and southbound designations of the freeway, Caltrans made no other changes to mainline or street signing, and as such, pull-through signs, overhead signs, and freeway entrance signs all still reference north and south instead of east and west.

U.S. Route 101 enters Oregon four miles (6 km) south of Brookings, and is seldom out of sight of the Pacific Ocean except the northern end near Astoria; the major exception being a significant inland stretch south of . It crosses the Siuslaw River Bridge in Florence. The stretch between Florence and Yachats is considered one of the more attractive segments of this highway. There are a number of Oregon s along the Pacific coast, including the . Because U.S. 101 forms the main street of almost all of the coastal towns in Oregon (with the exception of Cannon Beach and a few others), it is frequently, though not always, congested and slow. The highway crosses the mouth of the over the 4-mile-long (6-km) at Astoria into , and follows the Columbia downstream to Ilwaco.

From Ilwaco, U.S. 101 follows the Pacific coastline as far as Raymond, from which it proceeds directly north to Aberdeen, offering access from this city into the . While the AAA has designated this segment north and then east to Port Angeles and Sequim as a scenic byway, some clear-cut in the early 1990s has diminished the scenic value of the highway where it crosses the Quinault Indian Reservation and the . An expressway goes through Sequim. East of Sequim, Route 101 turns southward, leading to Shelton and its "northern" terminus in Olympia, the state capital. Upon reaching Shelton, U.S. 101 turns into a two lane bypass that changes to a freeway at the junction of State Route 3, merging with State Route 8 and finally ending at .

Parts of Historic Route 101 can still be found in San Diego County between Oceanside and the border with under a variety of different names. Through Oceanside it is called Coast Highway. In Carlsbad it becomes Carlsbad Blvd, but to the south in Encinitas it is Coast Highway 101. Solana Beach keeps it consistent with Highway 101, but Del Mar changes it to Camino Del Mar. All of those together make up . From there it continues along Torrey Pines Road to in La Jolla. The old 101 routing continues on I-5 in until Pacific Highway, the old U.S. 101 freeway a little west of current I-5. It then continued on Harbor Drive and Broadway through Downtown San Diego and Chula Vista, then onto National City Blvd in National City. The southern parts of I-5 were U.S. 101 for a period before I-5 was completed also. All have been decommissioned, but the roadways still exist and are occasionally signed as Historic 101.

Most of Historic 101 between Gilroy and San Francisco is still active, either signed as Business 101 or as State Route 82. The 101A bypass, however, is mostly discontinuous and is paralleled by the actual freeway, in some cases serving as an access road to the freeway.

Large parts of the old U.S. Business 101 and State Route 82 surface roads between San Francisco and San Diego are designated El Camino Real (The Royal Road), a designation originally given any thoroughfare under the direct authority of the King of Spain and his viceroys. These portions constitute the first major road in California.

Before the was completed, Highway 101 was divided in the San Francisco Bay Area. 101-W (west) followed the same general right-of-way of today's 101 from San Jose to San Francisco. 101-E (east) generally followed the right-of-way taken by today's I-880 from San Jose to Oakland. Since there was no Golden Gate Bridge yet, 101-W became a ferry ride across the Golden Gate Strait. As today, 101-W proceeded up Van Ness, but without any left turn at Lombard, ending at the . From there, motorists would drive onto a ferry boat which would cross the Golden Gate to , where they would drive off the ferry directly onto the main street of Sausalito, which was signed for U.S. 101 once again. [http://webbie1.sfpl.org/multimedia/sfphotos/AAC-2256.jpg]

The 101-E designation was removed by the 1940s and became state Route 17 (later Interstates 880 and 580) between San Jose and Santa Rosa. As the Bayshore Freeway was built along the east side of the San Francisco peninsula in the early 1950s, old U.S. 101 along the El Camino Real was posted as U.S. 101 Alternate or 101-a, and the freeway was marked U.S. 101-Bypass or 101-B. In 1964, when California renumbering numerous state highways, El Camino was renumbered California 82 and the Bayshore Freeway lost the Bypass designation.