Mira Costa High School (MCHS, "Costa") is a four-year public high school located in Manhattan Beach, California, United States that first began operating in 1950. It is the only high school in the Manhattan Beach Unified School District. The school's athletic teams are known as the Mustangs and the school colors are green and gold.

Costa students team up with Redondo Union High School students to create Beach Cities Robotics. The team participates in the organization FIRST [3] (For Inspiration and Recognition of Science and Technology) as Team 294. FIRST is an organization that fosters the advancement of science and technology by sponsoring programs for all grade levels and holding robotics competitions internationally. The premier event, FIRST FRC competition, gives teams six weeks to design, build, and test a robot to compete in a team-based game according to the rules of the specific competition. Students participating in the robotics club gain hands-on experience in engineering, physics, math, programming, public relations, teamwork, and many other skills.

Under the direction of Michael Hayden, the award-winning Choirs of Mira Costa High School perform at a variety of venues and participate in many activities during the school year, including our PRISM concert, Winter Concert, Spring Concert, Choral Music Festivals, & the Manhattan Beach Hometown Fair.

The choir program experienced significant growth under the direction of Sandra Schnieders. She directed three choirs: Concert Choir, Chorale, and the Vocal Ensemble. On April 9, 2006, the choir performed Handel's Messiah at Carnegie Hall. Sandra Schnieders left in 2007. After her departure Michael Hayden became the director of choirs. He added a 4th choir to the curriculum, Multi-Cultural Choir.

The 2008 Golden State Competition was hosted at Mira Costa High School. Vocal Ensemble took 2nd place in the small group division. In 2009, Vocal Ensemble was selected to be a part of the Best of High School A Capella (BOHSA) 2009 CD compilation with Eric Whitacre's "Sleep". They were the only school from California out of 13 nationally recognized choirs.

In the summer of 2010 Vocal Ensemble was the first high school choir to sing in the International Festival of the Aegean in Syros, Greece. They performed as part of the opera chorus in Carmen. They also were the closing choir in the Sunset Concert at St. Nicholas Cathedral on Sunday 18 July 2010.

In March 2012, Vocal Ensemble is scheduled to perform at the American Choral Directors Association's Western Division Conference in Reno, Nevada just days before singing as the featured choir in a festival at Carnegie Hall.

The band program is directed by Mr. Carlson. The marching band is known as the 'Marching Mustangs' and they perform their field show at home football games and in various competitions against other field marching bands. The marching band promotes student leadership and gives students the opportunity to earn ranks such as Section Leader and Drum Major. The Mustang band teaches unity, respect, musicality, and responsibility. During the second semester, most members of the marching band participate in either Concert Band, Symphonic Band, Jazz Band or Wind Ensemble. These award winning ensembles frequently travel to festivals in the SCSBOA circuit and have upheld their tradition of unanimous superior rankings.

The Mira Costa Orchestras consist of just over one hundred and thirty 9th – 12th graders who participate in the Philharmonic Orchestra, Symphony Orchestra, and Chamber Ensemble.

The color guard works in conjunction with the Mira Costa Marching Band. The color guard adds a visual flair to the marching band by spinning and tossing flags, rifles, and sabers. The guard currently performs with 6-foot-tall (1.8 m) flags, and an experienced portion of the guard also performs with mock rifles and sabers. After marching season, winterguard season starts. They travel around Southern California to compete, and have gone to WGASC championships every year.

A former club for students interested in the fields of architecture and engineering. Currently in the works to be restored as an official club on campus.

The Mira Costa Drama Program is a well-respected program in the south bay. In the fall of 2007, the Drama Department put on the musical Assassins. This last spring the Mira Costa Drama Department put on Beauty and the Beast The Musical and was largely successful. The show was directed by Nicole Thompson, choreographed by Anna Rubin Schutte, and produced by Carol Mathews. The show opened on April 18 and was the most successful show in the department's history. The 2009 fall production, The Elephant Man was directed by David Lamoureux and opened November 14. Crazy For You, a Tony-award winning tap show with a compilation of music by Gershwin, will be the spring musical of 2009. The MCHS Drama Department also attends theater festivals to compete against other schools with scenes and other "teams." The department is headed by Ms. Carol Mathews.

The Spirit Program is run by head coach Jay Watson and assistant coach Maria Crawford. The team consists of both JV and Varsity Cheerleading Squads and, new for 2010–2011, Songleading Squad. The Spirit Program promotes school spirit by attending the JV and Varsity games for the Football, Girls' and boys' volleyball, Girls' and Boys' basketball, and other Sports on campus. The cheerleaders practice daily after school and during 6th period. Cheerleading is one of the few all-year activities at Mira Costa.

The Mira Costa Dance Team is a varsity team. They perform at football games, basketball games, competitions and pep rallies. The dance team is currently made up of 15 girls. The dance team practices in the Mira Costa cafeteria during sixth period and has won many awards for its excellence and professionalism, including a first place for their pom routine at a regional competition this year.

The Mira Costa Key Club is a community service club that is the High School subsidiary of the Mira Costa Kiwanis. The Key Club does many activities throughout the year, from beach clean ups, fundraiser event for various causes and feeding the homeless.The key club also helps run the kiddie corner of the Manhattan Beach Home Town Fair, each year. The Key Club advisor is Lisa Claypoole, teacher at Mira Costa as well as member of Hermosa Beach School Board.

Mira Costa's newspaper has been an active organization on campus since the school's creation in 1950. Students in the journalism program are encouraged to take the Journalism 1–2 class to learn the basics of writing news, opinion, entertainment, features and sports stories, as well as how to use InDesign and Photoshop.

The newspaper is published 11 times during the year (every three weeks) and has 20 pages. It is distributed to the entire student body of Mira Costa as well as several hundred subscribers. La Vista pays for itself through a lab fee, advertisements and subscriptions.

The paper always contains a centerspread "theme" page, a staff editorial, a note from one or both editors-in-chief, a satirical "top ten" and a sports column.

The newspaper has consistently won silver and gold awards from the Columbia Scholastic Press Association since 1980. La Vista is well-known for breaking the story of Coach Thomas Wallace's sexual misconduct, which resulted in his serving prison time for sexually abusing two 15-year-old Mira Costa students.

The Mustang Morning News is a live, nationally award-winning newscast produced by broadcast journalism students at Mira Costa. The shows are aired to the campus twice a week, and podcast on the official website. Founded by adviser and Media Arts Teacher Michael Hernandez in 1999, the broadcast journalism program has become a campus fixture and launched film and television careers of its alumni. It consists of two class periods (one beginning, one advanced) of approximately 50 students. The newscast is run as a public forum for student expression, meaning that students make all content and editorial decisions as allowed by California free speech law (using the Hazelwood v. Kuhlmeier standard).

The staff are members of national journalism organizations such as the National Scholastic Press Association, Journalism Education Association and Student Television Network. They travel to and compete at national conventions sponsored by these groups, and have won multiple awards for their work. Adviser Michael Hernandez has presented seminars and acted as a judge at these conventions, and is also an Apple Distinguished Educator.

Alumni of the program have achieved success at the collegiate level and beyond. Graduates have attended film school at USC, NYU, Boston University, Loyola Marymount and others, and broadcast journalism schools including USC Annenberg School of Communication and Northwestern. Other students have worked at ABC and Miramax Films. Dan Goldstein, class of 2004, recently won MTV's Best Filmmaker on Campus 2008. Andrew Ceperley, class of 2004, directed and photographed a number of short films for Paramount Pictures' Blu-ray release of the "Friday the 13th" film series in 2008 and 2009.[5]

In September 2010, U.S. history teacher Bill Fauver was honored as one of Los Angeles Country's Teachers of the Year, for the school year 2010-2011.[7] Since he began teaching at Mira Costa in 1986, Fauver has served as vice principal, yearbook adviser, chair of the history department. He organized the first annual Scholar Quiz competition, served served as academic decathlon coach, and coaches junior varsity golf.

Sports Ranked 11th in the Nation by ESPN

Mira Costa High School is a common filming location for the popular television series "The O.C."[14] and

CSI: Miami.[15] In 1981 portions of the film "Midnight Offerings"IMDb starring Melissa Sue Anderson were filmed on the campus. In 1979 many students, most notably members of the football team attired in their green and gold uniforms, were included as extras in the film Rock 'n' Roll High School. Recently, the administration building of Mira Costa High School was used as the high school for the Disney TV show Hannah Montana starring Miley Cyrus. In 2006, a portion of the quad was used as a scene in the OC. In 2008, an episode of CSI: Miami was filmed using the pool and members of the varsity swim team were used as extras. 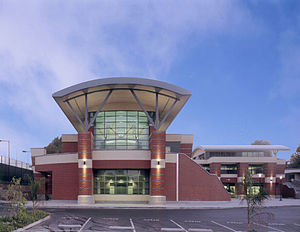 Vocational shops and other resources