Downey is a city located in southeast Los Angeles County, California, United States, 21 km (13 mi) southeast of downtown Los Angeles. The city is best known as the birthplace of the Apollo space program, and is the city where folk singer Karen Carpenter lived and died. As of the 2010 census, the city had a total population of 111,772, up from 107,323 at the 2000 census.

Prior to the arrival of the Spanish in Alta California, the area that now comprises Downey was inhabited by the Tongva ethnic group, which came to be called the Gabrielino by the Spanish. The nearest Tongva settlements appear to have been just north and northeast of present-day Downey, although there is difficulty is locating them very precisely.[2] The villages of Naxaaw’nga and Sehat seem to have been situated near the present-day community of Los Nietos, or perhaps farther west on sites that were lost to floods of the San Gabriel River. Chokiishnga and Huutnga are other Tongva place names that may have referred to villages in the general area north of Downey between the San Gabriel River and Rio Hondo.[3] In all four cases, it is difficult to relate the original location descriptions, based on ranchos and land grants, to more specific sites identifiable by today’s landmarks. Mission San Gabriel Arcangel was initially founded on September 8, 1771, near these concentrations of Tongva population, at a site in the Whittier Narrows on a bluff overlooking the Rio Hondo near the intersection of today’s San Gabriel Blvd and Lincoln Avenue. [4] After five years, flooding forced the relocation of the mission to its present site in San Gabriel.

In 1784, Governor Pedro Fages granted to former soldier Manuel Nieto (1734–1804) the largest of the land concessions made during the Spanish control of California. Its 300,000 acres (1,200 km2) stretched from the Santa Ana River on the east to the Old San Gabriel River (now the Rio Hondo and Los Angeles River) on the west, and from the mission highway (approximately Whittier Boulevard) on the north to the ocean on the south. Its acreage was slightly reduced later at the insistence of Mission San Gabriel on whose lands it infringed. The Spanish concessions, of which 25 were made in California, were unlike the later Mexican land grants in that title was not transferred, but were similar to grazing permits, with the title remaining with the Spanish crown.[5]

The Rancho Los Nietos passed to Manuel Nieto's four children upon his death and remained intact until, in 1833, his heirs petitioned Mexican Governor José Figueroa to partition the property. The northwestern portion of the original rancho, comprising the Downey-Norwalk area, was granted as Rancho Santa Gertrudes to Josefa Cota, the widow of Manuel's son, Antonio Nieto. At approximately 21,000 acres (85 km2), Santa Gertrudes was itself a sizable rancho and contained the old Nietos homestead, which was a center of social life east of the pueblo of Los Angeles.[6] After the Mexican-American war concluded in 1848, many of the Californio ranchos were obtained by affluent Anglo-Americans who were immigrating west under the United States manifest destiny doctrine, and marrying into established Californio Spanish families. 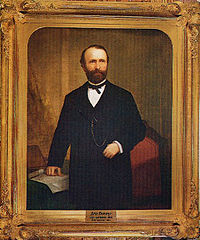 Unlike most Southern California towns, Downey can claim some of its roots came from Ireland. [7] Downey was founded by and named for the former and youngest ever governor of California, John Gately Downey, who was born in Ireland. Although he was an Irish Democrat, he supported the Republican Lincoln in his efforts to keep the Union intact during the Civil War. He pioneered the modern subdivision with land he acquired between the Rio Hondo and the San Gabriel River, in about 1865. Downey was convinced that oranges would flourish in Southern California, so he imported several varieties, and therefore set in motion what became one of the state's biggest cash crops.[7] In 1935 Downey was described as an "orange-grove town".[8] The Southern Pacific Railroad arrived in 1873, and farmers in the area grew grain, corn, castor beans and fruit until around 1940.

Downey was incorporated in 1956, and instituted a charter form of government in 1964. Suburban homes and factories replaced the farms after World War II. The largest employer was originally Vultee Aircraft, then North American Aviation, (later North American Rockwell, then Rockwell International which was then bought by the Boeing company) whose facilities were the birthplace of the systems for the Apollo space program as well as the Space Shuttle. For over 70 years, Downey's Rockwell NASA plant produced and tested many of the 20th century's greatest aviation, missile, and space endeavors. By the early 1970s, the facilities encompassed some 1,700,000 square feet (160,000 m2) of enclosed area over more than 200 acres. But, by the early 1990s, Downey was brutally hit by cutbacks in the defense budget. Rockwell International, who once had over 30,000 employees, had less than 5,000 in 1992.[citation needed] The seventy year history of airplane and space vehicle manufacturing in Downey came to an end when the Rockwell plant closed in 1999. The former Rockwell plant has been converted to the Downey Landing shopping complex, a Kaiser Permanente hospital, a park, a space museum and Downey Studios.

Near the center of the city lies what was once one of the busiest intersections in the world, the intersection of Lakewood Boulevard (State Route 19) and Firestone Boulevard (former State Route 42). Route 19 was a major thoroughfare between Pasadena and the port at Long Beach, and Route 42 was part of the old Spanish Trail system that connected Los Angeles to San Diego. In the 1960s the town's Downey Records achieved a small notoriety with recordings like The Chantays' surfing instrumental "Pipeline". Downey's two main public high schools are named for Governor Downey and Governor (and later, Chief Justice) Earl Warren. Downey is home to Rancho Los Amigos National Rehabilitation Center, which is the main public rehabilitation hospital for Los Angeles County. Rancho Los Amigos is renowned worldwide for its innovative contributions to the care of spinal cord injuries and post-polio syndrome.[citation needed]

Downey was featured in the 2008 American action comedy film Pineapple Express. Many of the buildings along Florence Ave. can be viewed in a driving scene early in the film.[citation needed] 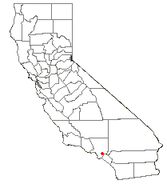 The cities of South Gate and Bell Gardens are adjacent to the west and northwest, Pico Rivera lies to the northeast, Santa Fe Springs and Norwalk to the east, and Paramount and Bellflower are to the south.

There were 33,989 households out of which 41.8% had children under the age of 18 living with them, 54.1% were married couples living together, 15.8% had a female householder with no husband present, and 23.5% were non-families. 19.1% of all households were made up of individuals and 8.1% had someone living alone who was 65 years of age or older. The average household size was 3.11 and the average family size was 3.55. 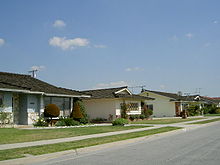 Downey has the second highest percentage of Cubans and Cuban Americans in the Western United States at 1.96% of the population.[13] 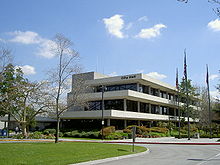 According to the City's 2009 Comprehensive Annual Financial Report,[19] the top employers in the city are: 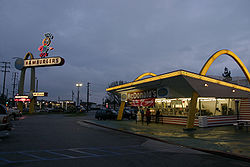 The 1953 McDonald's restaurant at 10207 Lakewood Blvd. (at Florence Ave.) was the third McDonald's built and is the oldest surviving McDonald's. It was listed on the National Trust for Historic Preservation's 1994 list of the 11 Most Endangered Historic Places. It was the second restaurant franchised by Richard and Maurice McDonald, prior to the involvement of Ray Kroc in the company, and it still has the two original 30-foot (9.1 m) "Golden arches" and a 60-foot (18 m) animated neon "Speedee" sign.

Johnie's Broiler (originally Harvey's Broiler) was a drive-in restaurant and coffee shop, which has been in movies and sitcoms as well as TV commercials and music videos. Completed in 1958, it is an example of Googie architecture. Johnie's was well known to Southern California locals, many of which drove miles to cruise through its massive lot. In the mid-1960s, renowned author Tom Wolfe immortalized the cruising, car and fashion scene that surrounded Harvey's Broiler at the time; The article, "The Hair Boys," appears in a bestselling 1968 collection of his articles titled, The Pump House Gang. He made drawings of the denizens of Harvey's that appear in a later book, The Purple Decades. The Broiler was a regular commercial and movie location for films such as Heat, What's Love Got to Do with It, Unstrung Heroes, Reality Bites, Can't Hardly Wait, Jawbreaker, as well as a television episode of The X-Files. Lily Tomlin played a waitress who worked at Johnie's in Short Cuts. The last film shot at Johnie's was The Country Bears.[20]

The restaurant was closed in 2001, and a used car dealership leased the property. In January 2007, the leasees of Johnie's started to illegally tear it down.[21] The destruction of the building was halted, with extreme damage to the building, though the sign is intact.[20] Tenants made significant alterations to the dining room without permits, and the City of Downey had to issue several stop work orders and citations.[20]

In April 2008, Jim Louder, owner of the Bob's Big Boy restaurant in Torrance, California, entered into a long-term lease agreement with the owner of Johnie's Broiler.[22] The restaurant was rebuilt as a Bob's Broiler and incorporated the surviving architectural elements of the old structure into the new restaurant.[23] Bob's Big Boy Broiler is now open for business.[24]

Glen Bell opened the first Taco Bell restaurant on March 21, 1962, in Downey. The building, at 7112 Firestone Boulevard, is largely unchanged from its original appearance, but it is no longer a Taco Bell.

The Downtown Downey Farmers' Market was approved by the Downey City Council in 2008. It has rapidly blossomed into a community main attraction, with the standard fruit and vegetable stands and a growing number of food booths. It is open every Saturday from 9 AM to 1 PM on Second Street between New St. and La Reina. The market is intended to be a community gathering place, an opportunity to purchase California-grown products, homemade tamales and a vehicle to improve and finance Downtown Downey. [25]

While reports of robberies, aggravated assaults and petty thefts in Downey dropped in 2008, auto thefts reached a 10-year high. In 2008, 1,231 vehicles were reported stolen in Downey. Other crimes recorded by the FBI Crime Index for the year 2008 include 252 robberies, 172 aggravated assaults, 24 rapes, 711 burglaries and 2,038 acts of larceny/thefts.[26]

In the late 1980s and early 1990s, Downey saw an increase in gang activity. Today there is still gang activity going in the south area of Downey. In response, Downey formed GOOD (Gangs Out Of Downey), a community-based organization that helps encourage young people between the ages of 10-20 to stay away from gangs. GOOD is also responsible for organizing many community events and programs such as various sports, after school care, scholarship programs for at-risk students looking to attend college, and counseling for both young people and their parents. GOOD has kept a close partnership with Downey Police.[27] 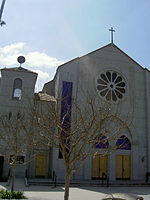 Our Lady of Perpetual Help, serving the Catholic Community of Downey

Downey is within the Downey Unified School District. Public schools include:

The Downey City Library serves the city. The first library in Downey was established in 1901 by a women's social club that was founded in 1898. The County of Los Angeles Public Library opened a branch in Downey in September 1915. The county branch moved several times; its final location was in the County Civic Center. In 1958 the Downey City Council voted to establish its own library and withdraw from the county system. The city library services were originally provided out of the back of a bookstore. The city library opened in the former cafeteria of the former Downey Elementary School, then being used as the city hall and police station, on July 1, 1958. A permanent library building was built on December 7, 1959. It had almost 16,000 square feet (1,500 m2) and it was built for $186,200, costing $11.97 per square foot. It was dedicated on December 17 and opened on December 18. In February 1984 an addition of almost 12,000 square feet (1,100 m2) was completed and dedicated.[28]

In addition the headquarters of the County of Los Angeles Public Library are located in Downey.[29]