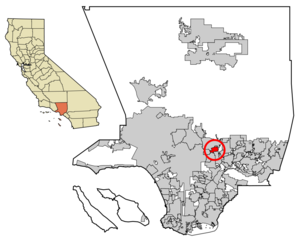 San Marino is an affluent city in Los Angeles County, , USA. Its ZIP code of 91108 ranks the city as the 48th most expensive place to live in the United States, with the median home sale price in 2007 of $1.55 million.

To Southern ns, San Marino was once known as one of the oldest of old-money wealth and a bastion of Southern 's WASP gentility. The community prides itself on maintaininga high quality residential community. San Marino may be recognizable to many Americans for the prevalence of filming in the city. Many television shows, such as "", and movies, such as "" have been filmed in San Marino and Pasadena. Location scouts also turn to San Marino when they wish to film a series in Southern California that takes place elsewhere, like the East Coast. Certain neighborhoods resemble the East Coast because of the atypical housing stock in the city, including Georgian and faux mansions.

The city is divided into seven zones, based on minimum lot size. The smallest lot size is about convert|4500|sqft|m2, with many averaging over convert|30000|sqft|m2. Because of this and other factors, most of the homes in San Marino, built between 1920 and 1950, do not resemble the houses in surrounding Southern California neighborhoods (with the exception, perhaps, of neighboring Pasadena). San Marino has also fostered a sense of historic preservation among its homeowners. With minor exceptions, the city's strict design review and zoning laws have thus far prevented the development of "s" found elsewhere in Los Angeles. Generally speaking, San Marino homes are older, bigger and more genteel than those in other adjacent communities. This is also a result of the city's emphasis on tree preservation and the large front setback requirements. No apartment buildings exist in the city.

San Marino is also regarded as having one of the best-performing schools in the Greater Los Angeles area. Its high school consistently ranks as the one of the highest API score among public high schools in California. All of its public schools are honored as a California Distinguished School and a United States .

The city includes the estate of , who made a fortune in the development of Southern California and opened the library and art collections in his large neo- mansion to the public in 1919, best known as the . At the time, San Marino was some twelve s from Los Angeles. Huntington Drive and Sierra Madre Boulevard serve as the main thoroughfares, leading to Pasadena, Alhambra and San Gabriel.

In the middle of San Marino lies Lacy Park, a huge 30 acre expanse of lush grass and trees rare for urban areas. Originally Wilson Lake in 1875, the land was purchased by the City in 1925 and dedicated as a park. Families in San Marino have enjoyed the park for years, and it remains one of San Marino's best kept secrets. The park includes six championship tennis courts and pro shop, administered by the San Marino Tennis Foundation. At the west entrance of the park is the Rose Arbor, which is of special significance for the people of San Marino. It is 60 years old and has long been a source of beauty and tranquility to many residents. In recent years the care and upkeep of the Rose Arbor itself has been augmented by private donations from dedicated residents who have chosen to sponsor individual posts. The park recently built a memorial to (a native of San Marino) and also a large memorial to Armed Forces along with a statue of a sad soldier. The memorial includes the names of all military personal from San Marino that where killed in various wars.

The , residence of astronomer , is a .

Another landmark is the Michael White Adobe House, located on the high school campus.

("The Old Mill"), completed about 1816 as a grist mill for Mission San Gabriel, is in San Marino. The original two-story structure measured convert|53|ft|m by convert|26|ft|m. It is the oldest commercial building in Southern California.

There are many s in the community, most cultivated by private homeowners. During the season, the tall trees of St. Albans Road are decorated with many s.

There were 4,266 households out of which 42% had children under the age of 18 living with them, 75% were married couples living together, 8.6% had a female householder with no husband present, and 13.9% were non-families. 12% of all households were made up of individuals and 7.3% had someone living alone who was 65 years of age or older. The average household size was 3.03 and the average family size was 3.29.

San Marino is a slightly conservative communityFact|date=June 2007 in the midst of a mostly liberal state. There also is large support for Asian interests. Elected positions are often held by private citizens who show no ambition for higher political office. Political participation generally lies in the form of donations for political parties and candidates.

To preserve quality of life, the has passed numerous stringent ordinances, including laws against the use of power equipment on quiet Sunday afternoons and against dead lawns. It is illegal to leave trashcans on the street or in public view. Most contractors including gardeners are required to have city permits to work in private residential neighborhoods. Multi-family housing is not permitted and none exist within the city limits.

Residents who wish to construct or refurbish their properties must undergo a strict and lengthy process that can include community hearings and consent among all neighbors. The plans must be approved by the city in order for construction to begin. At times, homeowners will be denied construction rights by the city if their plan does not satisfy building or design requirements.

In 2005 and 2006, the ranked first among all 328 California unified school districts based on the California Academic Performance Index. is considered one of the best-performing public schools on Standardized Achievement Tests (as of 2004) in Southern California. It was also named a in 2006. Most of San Marino's schools' funds come from private donors and organizations. Fact|date=February 2007.

In November 2007, U.S. News and World Report put San Marino High School in number 82 on its list of best high schools in the nation, giving SMHS the Gold Medal honor.

Asian-Americans are 70% of San Marino school enrollment as of December 2005. Strong support for education from the Asian community has bolstered the excellence of the school district.

The owns a house in San Marino which is used as the residence of the President of the University. The residence and grounds are large enough to allow events to be held there.

* Intrigued by the recently renovated campus, stellar academic program and wealthy community base, scouted San Marino High School in early 2004 looking to cast students and shoot pilots for three different proposed television show concepts. The school administration agreed to hold a casting call on campus with students during school hours. Producers eventually shot two of the three proposed pilots, only one of which aired. The short-lived "Borrow My Crew" series followed a high school senior around for a few weeks up until Prom Night -- in which singer and actress lent her personal hair dresser, make-up crew, and stylist to make her Prom Night extra special. Celebrity was her date to the event and later performed on the dance floor with the student body. The third show concept was for a documentary series that would follow a group of wealthy and privileged high school kids as they went about their everyday lives -- intended as a reality spin-off homage to the show and in the format of MTV's long-time running . Producers eventually decided to create the show in Orange County, set amongst a liberal beach town to capitalize on the immense success of Network's new teen-drama sitcom . The concept eventually came to be the first season of the now popular reality television program .In the Movie "Mask", Rocky Dennis (played by Erik Stoltz) has a girlfriend from San Marino

*James T. Maher, "The Twilight of Splendor : Chronicles of the Age of American Palaces" 1975. Chapter on Huntington's San Marino