Mariel Margaret "Mia" Hamm (born on March 17, 1972, in Selma, Alabama) is a retired American soccer player. Hamm played many years as a forward for the United States women's national soccer team and was a founding member of the Washington Freedom. Hamm has scored more international goals in her career than any other player, male or female, in the history of U.S. soccer (158).[1] She is the second most capped female player in soccer history behind Kristine Lilly, appearing in 275 international matches throughout her career.

Hamm was named the women's FIFA World Player of the Year the first two times that award was given (in 2001 and 2002), and is listed as one of FIFA's 125 best living players (as chosen by Pelé). Washington Post columnist Michael Wilbon called Hamm, "Perhaps the most important athlete of the last 15 years."[2]

She retired from the sport in 2004, when she played her last game in the 2004 Fan Celebration Tour to commemorate the U.S. women's national team's victory in the 2004 Olympics. In 2007, her first year of eligibility, she was selected for induction into the National Soccer Hall of Fame by having 137 votes of the 141 ballots cast. Women's Professional Soccer, a professional soccer league that launched in 2009, features Hamm's silhouette in its logo.[3]

Inducted into the Alabama Sports Hall of Fame Class of 2006. [4] 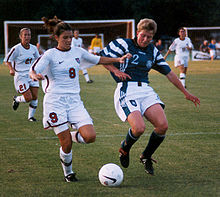 She is the author of Go For the Goal: A Champion's Guide to Winning in Soccer and Life. She appeared in the HBO documentary Dare to Dream: The Story of the U.S. Women's Soccer Team. 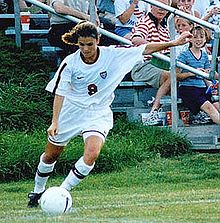 Hamm was born with a club foot and had to wear corrective shoes as a toddler.[6] Hamm spent her childhood on Air Force bases with her parents, Bill and Stephanie Hamm, and her five siblings. The family moved many times and resided in several places including San Antonio, Texas, and Italy.[7] Hamm played organized sports from a very young age, and at age fifteen she joined the U.S. women's national team, becoming the youngest ever to play for them.[8] She played for Notre Dame Catholic High School, Wichita Falls, Texas, as a freshman and a sophomore. Hamm then attended Lake Braddock Secondary School in Burke, Va for one year, and helped the Lake Braddock soccer team win the 1989 state championships.[9] Mia Hamm's brother played sports, inspiring her to do so as well.

She attended the University of North Carolina at Chapel Hill, where she helped the Tar Heels to four National Collegiate Athletic Association (NCAA) women's championships in five years (she sat out the season of 1991 to concentrate on the 1991 FIFA Women's World Cup in China). North Carolina only lost one game in ninety five she played.[9] She was an All-American and Atlantic Coast Conference player of the year for her last three years. She also won ACC Female Athlete of the Year in 1993 and 1994.

In 1991, when the women's national team won the FIFA Women's World Cup for the first time, Hamm became the youngest American woman to win a World Cup championship at the age of nineteen.

She was also a member of the American National college team that played in the 1993 Summer Universiade and lost to China, obtaining the silver medal. She was the leading scorer with six goals. She graduated from college with the all-time records for her conference in goals with 103, assists with 72, and total points with 278.

On May 22, 1999, Hamm broke the all-time international goal record with her 108th goal in a game against Brazil in Orlando, Florida. 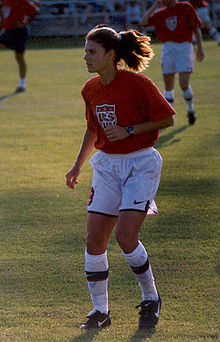 In 1999, Nike named the largest building on their corporate campus after Hamm, and that same year she and the rest of the women on the national team became world champions again by winning the FIFA Women's World Cup. The final match surpassed the Atlanta Olympic final as the most-attended women's sports event, with over 90,000 filling the Rose Bowl.

Hamm was named the 1997 Sportswoman of the Year (in the team category) by the Women's Sports Foundation.[9]

On May 14, 2004, she announced her retirement effective after the 2004 Athens Olympics, expressing an interest in starting a family with her husband, Nomar Garciaparra.[10][11]

In March 2004, Hamm and former U.S. teammate Michelle Akers were the only two women, and the only two Americans, named to the FIFA 100, a list of the 125 greatest living soccer players selected by Pelé and commissioned by FIFA for that organization's 100th anniversary.

In a friendly game against Australia on July 21, 2004, Hamm scored her 151st international goal; she has long held the record in that category for any player, male or female. This match also marked her 259th international appearance; only her teammate Kristine Lilly has played in more internationals.

She helped lead Team USA to a gold medal at the 2004 Summer Olympics and was also chosen by her fellow U.S. Olympians to carry the American flag at the Athens Closing Ceremonies. After the Olympics, Hamm and her teammates went on a "farewell tour" of the United States, which finished on December 8, 2004 against Mexico at the Home Depot Center in Carson, California. In the game, which the U.S. won 5–0, Hamm assisted on two of the goals. Hamm is one of three longtime national team members who announced their retirements from international play at the end of the tour; the others are longtime captain Julie Foudy and Joy Fawcett (Fawcett did not play due to back surgery after the Olympics). Hamm retired with 158 international goals at age thirty-two.

For the majority of Hamm's career there was no fully professional women's soccer league in the United States. As a result she played only three seasons of club soccer. In 2001 she signed for the Washington Freedom in the newly established Women's United Soccer Association. The league suspended operations indefinitely in September 2003, but Hamm finished her short club career as a champion when the Freedom won the Founders Cup in that final season.

Her adoptive brother, Garrett Hamm, died on April 16, 1997 of complications from aplastic anemia, a rare blood disease. Hamm established the Mia Hamm Foundation in part to support patients and their families who benefit from bone marrow transplants.

Coaching and other work

Mia has teamed up with former national team players, Tisha Venturini and Kristine Lilly, to operate the TeamFirst Soccer Academy. TeamFirst specializes in conducting youth soccer camps throughout the nation.

Hamm is a global ambassador for FC Barcelona. She also hosts an annual celebrity soccer game in Los Angeles to support her foundation which raises funds for families needing marrow and cord blood transplants.[16]