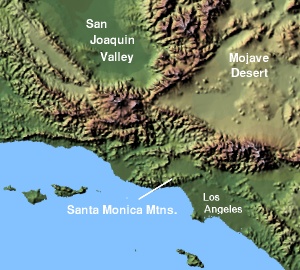 The Santa Monica Mountains are a low transverse range in southern in the .

They run for approximately 40 mi (64 km) east-west from the in Los Angeles to in Ventura County. The mountains form a barrier between the and the , separating "the Valley" on the north and west-central Los Angeles on the south. Santa Monica Mountains are to , which is located directly north of the mountains across the San Fernando Valley. Beginning at the eastern end of the San Fernando Valley, the mountains are bordered to the north by the Los Angeles River. The river flows south after Elysian Park, defining the easernmost exent of the mountains. Mount shington, on the other side of the river, has almost identical native flora and climate, however.

Geologists consider the northern Channel Islands to be a westward extension of the Santa Monicas into the . The range was created by repeated episodes of uplifting and submergence by the that created complex layers of rock. Volcanic instrusions have been exposed, including the poorly named "Sandstone Peak", the highest in the range at 948 meters (3,111 ft). , which eroded its own channel while the mountains slowly tilted up, bisects the range.

On , an unusually cold storm brought snow in the Santa Monica Mountains. Malibu picked up 3 in (8 cm) of - the first measurable snow in 5 decades (50 years). Snow was also reported in , in the winter of 2005, and in March 2006, snow also fell on the summit of the mountain.

The Santa Monica Mountains are in the ecoregion and are covered by hundreds of local plant species, some of which are very rare, and others of which have become popular ornamentals. The range is host to an immense variety of wildlife, from s to the endangered steelhead.

The mountains have more than 1,000 sites of archeological significance, particularly in regard to the and Chumash people. Today, the Santa Monica Mountains face pressure from local populations, who see the range as a recreational retreat, a desirable residential area, and as an increasingly rare wild place in urban .

In local speak, "going over the hill" refers to crossing the range.

, present-day site of U.S. Route 101, is the easiest pass through the range connecting the to the . In the 1800s, two battles were fought there, and the was signed nearby. In the heyday of Hollywood movie studios clustered on both sides of it. is the main north-south pass to the west, connecting the Westside to Sherman Oaks via the (I-405). Further west are (SR 27), , and . runs much of the length of the Santa Monica Mountains, from Cahuenga Pass to Woodland Hills while the runs from Woodland Hills to . The eastern end of the range, located in the City of Los Angeles, is more intensively developed than the western end of the range. The city of Malibu runs between the coast and the leading mountain ridge, from Topanga Canyon in the east to in the west. The term is sometimes used derogatorily (or ironically) for the unincorporated part of Malibu beyond the leading mountain ridge and lacking an ocean view; the term is often used synonymously with "818 Malibu" (referring to the less desirable San Fernando Valley telephone area code prefix).

Much of the mountains are located within the . Preservation of lands within the region are managed in part by the . Over twenty individual state and municipal parks are in the Santa Monica Mountains, including: , , , , , , , , , , and the .

Communities along the north slope of the mountains include (from east to west):

Communities along the south slope of the mountains include (from east to west):

and finally are the eastern end of the Santa Monical Mountains. Griffith Park is separated from the rest of the Santa monica Mountains to the west by the , over which the passes from the into . Elysian Park is the easternmost part of the mountains and is bordered by the to the east.

Fungi of the Santa Monica Mountains

The are dominated by two ecosystems, along the coast, then as the Mountains rise from the coast.