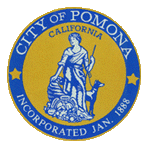 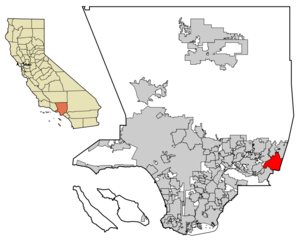 Pomona is the location of (Cal Poly Pomona). This university was established on the site of magnate W.K. Kellogg's ranch located on the city's west side. It is also the home of the Los Angeles County fairgrounds. While a fair in the nation's most populous county might seem quaint, Cal Poly Pomona is one of several major agricultural research facilities in the state, and the fair's livestock exhibits are a noted attraction.

is located in downtown Pomona, with programs ranging from to to osteopathic medicine.

Pomona is not the site of . Although this private institution was founded in the city in 1887, its campus has been in neighboring Claremont since 1889.

Since the 1980s, Pomona's newest neighborhood Phillips Ranch, experienced rapid growth with. Homes are still being built in the hilly area between Downtown and Diamond Bar. Today, Phillips Ranch is nearly all residential. Northern Pomona has seen some gentrification with additional housing units added and revamped streetscapes.

Pomona is bordered by the cities of San Dimas on the northwest, La Verne and Claremont on the north, Montclair and Chino on the east, Chino Hills and Diamond Bar on the south, and Walnut, South San Jose Hills, and Industry on the southwest. The Los Angeles/San Bernardino county line forms most of the city's southern and eastern boundaries.

The city is named for , the ancient Roman goddess of fruit. Supplied by horticulturist Solomon Gates, "Pomona" was the winning entry in a contest to name the city. By the 1880s, the arrival of s and water had made it the western anchor of the -growing region. Pomona was officially incorporated on , . In 2005, Pomona citizens elected Norma Torres, the first woman of Guatemalan heritage to be elected to a mayoral post outside of Guatemala.
* Historic Sites in Pomona
** Abraham Lincoln Elementary School,
** ,
** ,
** Lincoln Park Historic District,
** ,
** ,
** ,
** ,
** ,
** ,
** ,
** ,
** ,

There were 37,855 households out of which 49.8% had children under the age of 18 living with them, 54.7% were married couples living together, 16.3% had a female householder with no husband present, and 21.3% were non-families. 15.4% of all households were made up of individuals and 5.5% had someone living alone who was 65 years of age or older. The average household size was 3.82 and the average family size was 4.22.

Several freeways also run through the City of Pomona.

[http://www.cusd.claremont.edu/stu/images/boundary_main.gif] .Pomona has been criticized for its construction of in the city's more affluent area of Phillips Ranch while ignoring its other under-performing/moderate high schools such as (from most under-performing to moderate) Pomona, Ganesha, and Garey High Schools. Pomona contains a mix of both public and private schools. There are two private schools that are located on Holt Blvd, being St. Joseph Elementary School and .

is located southwest of the junction of the 10 and 57 freeways. [http://thesae.k12.ca.us The School of Arts and Enterprise] is a charter high school located on Monterey Ave. and Garey Ave.

was founded in Pomona but moved to neighboring after just two years.

*In an "" episode, the main characters of the show "go out to the country" on a day trip to Pomona. This is now seen as odd due to Pomona since becoming quite urban. In 1940, and spent their honeymoon in downtown Pomona.

*In the 1940 Disney animated short "Mr. Mouse Takes A Trip", Mickey is taking a train vacation from Burbank to Pomona. The conductor, Pete, won't let him bring Pluto, so he hides Pluto in his suitcase, and tries to hide him all throughout the trip without much luck. Pete thinks he's won when Pluto is hooked by a mail hook, and Mickey follows, but the twist is they actually got off the train in Pomona, as Mickey said "Look Pluto, Pomona, we're here".

*In 's 1950 film "Sunset Boulevard", () describes to () a melodramatic film version of that she has written for her return to cinema. Gillis cynically retorts "They'll love it in Pomona" and Desmond fails to notice his sarcasm, responding, "They will love it every place."

*It's a myth that originally planned on having built in Pomona, but the city council declined his offer, fearing that the park would not succeed and would cause the city to go into debt. According to Matthew Tresaugue, former reporter for the Inland Valley Daily Bulletin, it was one of 71 considered cities, but was ruled out due to temperature extremes, i.e. too hot in summer and too cold at night. It is interesting to note, however, that author used Pomona as the setting for the fictional amusement park Dream-a-Dreamland in his novel . Dream-a-Dreamland and its fictional owner, the cartoon magnate Ray Dieterling, were based very closely on Disneyland and Walt Disney.

*In the comedy "", an American produced by 's production company , 's permanently-stoned character decides to buy a lion in order to protect his stash of marijuana. In one scene, Dante can be seen smoking with an African tribesman, Dr. Shakalu, in his basement. When the main character, played by , asks Dante about the nature of his relationship with Dr. Shakalu, Dante indicates that he met the doctor at a in Pomona.

*In the "" episode of "", during the introductory scene, during the Springfield Isoptopes's game Pomona was used in a parody of 'The OC'. A poster background dipicting the word Pomona in a 'The OC' template. The announcer prompts Fox's newest endeavor 'Pomona' "it's even hotter "away" from the beach."

*The film "Inland Empire" contains a scene in which two homeless women on Hollywood Boulevard discuss people they know in Pomona and whether or not you can get there from Los Angeles by bus.

*The downtown Arts Colony served as backdrop for several scenes of "" starring Mike Myers, and several buildings are still painted the bright and vibrant colors.

*Scenes from Disney's "" were filmed at the LA County Fairground in Pomona.

*In the film "", tells his wife that a friend has retired to Pomona; he accidentally calls the city "Ramona."

*Lela's, a restaurant in Pomona, was featured on the television reality show "". The restaurant was shut down because of large debts, however.

*John Stewart, a singer-songwriter and graduate of , wrote the song "Back in Pomona". He is best known for being a member of and composing the song "". Pomona Catholic is currently an all girls school.

*In an episode of , she tries to get connections to a cousin of hers in Pomona.

* The manuscript for "" book by resides here at the "Laura Ingalls Wilder Room" of the Pomona Library.

*The , America's largest county fair in size and attendees, was established in 1922. The fair has been held continuously on the same site ever since, except during when the grounds were used as assembly camp, US Army ordnance and desert-training base, and POW camp.

*In 1955, Pomona annexed the neighboring community of Spadra.

*In 1999 Pomona ranked third for the highest murder rate in California behind Compton and Richmond. Nationally, the murder rate ranked 25th in the nation. By 2006, however, Pomona has reduced its crime rate from this high. [ [http://www.morganquitno.com/cit99rank.pdf Morgan Quitno Press] ]

* wrote a news article about Pomona in 2002. The article stated that "Older " have become associated with intruding urban blight. The Pomona City Council defended the City. The City Council stated that the article was "offensive." The references on crime, drugs, gangs, racial issues, and poverty rates in the article are "untrue," as defended by residents, and based more on than the actual 2000 census data on Pomona, which shows otherwise. Pomona is described by residents as a generally safe and diverse city.

*In the film "Live Free or Die Hard" some of the special effect scenes were filmed at LA County Fairground White Av parking lot.

*Barbarita Nunez, a worker in the city's Veterans Thrift Store, returned $30,000, on , which belonged to a woman who had recently died, to her family. She had found the money in donated clothing. The family gave Nunez a cash reward. [ [http://edition.cnn.com/2008/US/03/09/money.found.ap/index.html Thrift store worker finds $30,000 in cash; returns it] ]