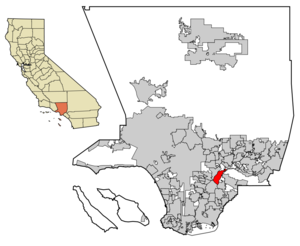 Pico Rivera was incorporated in 1958 from the merger of the long-standing unincorporated communities of Pico (named for , the last governor of California) and Rivera. Situated on a rich alluvial plain between the Rio Hondo and the San Gabriel River, the area was once predominantly agricultural, but since the 1950s it has been primarily residential. Pico Rivera lies below the , making it one of the "."

The north side of the city is home to the Pico Rivera Sports Arena, where concerts and sports are occasionally held.

A number of good parks dot the landscape, including Rivera Park on Shade Lane, Smith Park on Rosemead and Mines, Pico Park on Beverly Blvd, Rio Vista Park, and Stream Land park at the North end of Durfee Road.

There were 16,468 households out of which 43.5% had children under the age of 18 living with them, 58.7% were married couples living together, 17.8% had a female householder with no husband present, and 15.8% were non-families. 12.8% of all households were made up of individuals and 6.6% had someone living alone who was 65 years of age or older. The average household size was 3.83 and the average family size was 4.12.

In the state legislature Pico Rivera is located in the 30th Senate District, represented by Democrat , and in the 58th Assembly District, represented by Democrat . Federally, Pico Rivera is located in , which has a Cook PVI of D +20 [cite web | title = Will Gerrymandered Districts Stem the Wave of Voter Unrest? | publisher = Campaign Legal Center Blog | url=http://www.clcblog.org/blog_item-85.html | accessdate = 2008-02-10] and is represented by Democrat .The current city council consists of Mayor Ron Beilke, Mayor Pro Tem Gracie Gallegos-Smith, Bob Archuleta, David Armenta and Gregory Salcido. The city has a council/city manager form of government. The title of Mayor is a ceremonial position that is changed each year within the council.

There has been frequent redevelopment in the city of late, starting with the opening of a mega-shopping complex along Washington Blvd, bringing well-known businesses such as , the bookstore, , , a newly added and other businesses into the city.

Other redevelopment has taken place in recent years along historic , bringing new businesses such as Target and there.

New developments include the Krikorian Theatres at the corner of Paramount Blvd. and Whittier Blvd as well as a new Rite-Aid at the former Lucky's supermarket site on Durfee Ave. and Whittier Blvd. A state of the art LA Fitness, Fresh and Easy market, Rubios, Round Table Pizza, Juice It Up and other business' have opened up at the former Kmart site at the corner of Washington Blvd. and Rosemead Blvd.

There was a convert|157|acre|km2|sing=on manufacturing facility located at the corner of Rosemead and Washington boulevards which was owned and operated by the . The plant closed in 1980 and was purchased by in 1982 for its Advanced Systems Division. [ [http://query.nytimes.com/gst/fullpage.html?res=940CE7DE163BF936A35751C0A964948260 Northrop to Buy Vacant Ford Plant] , New York Times ] Upon the unveiling of the bomber in 1988, it was revealed that much of the development for the former had in fact occurred at the site. In the early 1990s, the division was renamed the B-2 Division to reflect its most famous product. At its peak, the project employed approximately 13000 workers in Pico Rivera. [ [http://www.globalsecurity.org/military/facility/pico-rivera.htm Pico Rivera] , globalsecurity.org.] The site closed and demolished in 2001 and is now a large retail center, anchored by and .

Fire protection in Pico Rivera is provided by the with ambulance transport by . The provides law enforcement.

Most residents attend schools in the . Only those in the Montebello Gardens area are in the .