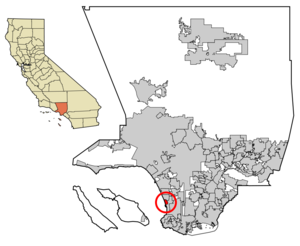 The city is located in the South Bay region of the greater Los Angeles area and is one of the three . It is bordered by Manhattan Beach to the north, and Redondo Beach to its east and south. Of the three cities, only Hermosa Beach owns its own beach. The other two cities' beaches are owned by the county of .

"Hermosa" ("beautiful" in Spanish) is an accurate description of this city's beach, which is also flat, sandy, and long; ideal for , , and . The city itself is only about 15 blocks from east to west and 40 blocks from north to south, with the Pacific Coast Highway running down the middle. Situated on the , Hermosa's average temperature is 70 degrees in the summer and 55 degrees in the winter. Gentle westerly breezes take the edge off what can be high summertime temperatures in and elsewhere in the county. The same breezes help keep the away 360 days of the year.

A paved path, called The Strand, runs along Hermosa's beach from Redondo Beach in the south approximately twenty miles north to Santa Monica. A typical day on this path will see thousands of people on foot, bicycle, skateboard, rollerblade and enjoying the sun and surf. A live image of the Strand and surf can be seen [http://www.hermosawave.net/webcam/ here] .

is a key element of the South Bay lifestyle year-round. Powerful winter storms in the Pacific Ocean can turn typically placid and rolling South Bay waves into large and occasionally dangerous monsters, a natural draw for the local surfing population. The Summer provides warm water and typically smaller waves for beginners to learn.

is another important aspect of Hermosa Beach's lifestyle. Hermosa Beach has been referred to as the Beach Volleyball Capital of the World. [http://sportsillustrated.cnn.com/2007/writers/the_bonus/07/05/zartman.avp.bonvissuto/index.html] The wide and flat sand beaches provide the perfect venue for the sport. Permanent poles and nets are maintained by the city year-round.

Hermosa Beach was originally part of the 1784 Spanish land grant that later became the ten-mile (16 km) Ocean frontage of Rancho Sausal Redondo. In 1900 a tract of 1,500 acres (6 km²) was purchased for $35 per acre from A. E. Pomroy, then owner of the greater part of Rancho Sausal Redondo. Messrs. Burbank and Baker, agents, bought this land for Sherman and Clark who organized and retained the controlling interest in the Hermosa Beach Land and Water Company,

In early days, Hermosa Beach — like so many of its neighboring cities (Inglewood, Lawndale, Torrance) — was one vast sweep of rolling hills covered with fields of , mostly . During certain seasons of the year large herds of were grazed over this land, and corrals and large s for storing the grain, as well as providing shelter for s and farm implements were located on the between Hermosa and Inglewood. The Spanish words "Rancho Sausal Redondo" mean a large circular ranch of of land, with a grove of on it.

occupy rooms in the building. This pier is municipally owned.

The was the only system through Hermosa Beach. It was seven blocks from the beach. The street that led to the tracks was called Santa Fe Avenue, but was later renamed Pier Avenue. There was no for Hermosa, but Burbank and Baker built a on the west side of the tracks near Santa Fe Avenue, and later the Railroad Company donated an old to be used as a storage place for freight. In 1926, the Santa Fe Company built a modern depot and installed service in it.

There were 9,476 households out of which 14.1% had children under the age of 18 living with them, 30.6% were married couples living together, 4.5% had a female householder with no husband present, and 62.5% were non-families. 39.4% of all households were made up of individuals and 3.9% had someone living alone who was 65 years of age or older. The average household size was 1.95 and the average family size was 2.65.

There are eight hotels and one in the city.

Hermosa Beach enjoys an average of 325 days of sunshine a year. Because of its location, nestled on a vast open bay (), morning fog and haze is a common phenomenon in May, June and early July (caused by ocean temperature variations and currents). Locals have a particular terminology for this phenomenon: the "May Gray" and the "". Overcast skies are common for June mornings, but usually the strong sun burns the fog off by noon. Nonetheless, it will sometimes stay cloudy and cool all day during June, even as other parts of the Los Angeles area will enjoy sunny skies and warmer temperatures. At times, the sun shines east of PCH, while the beach area is overcast.

The rainy season is from late October through late March. Winter storms usually approach from the northwest and pass quickly through the Southland. There is very little rain during the rest of the year.

Hermosa Beach usually enjoys a cool breeze blowing in from the ocean, keeping the air fresh and clean. Therefore, is less a problem for Hermosa Beach than elsewhere around Los Angeles.

The wide flat beach makes Hermosa Beach one of the most popular places to play beach volleyball, from professional to amateur. Hermosa Beach is home to the AVP Hermosa Beach Open tournament. The Strand stretches north into and south into Redondo Beach and is a popular place for walkers, joggers and biking.

Running parallel to The Strand is a lovely linear trail known today as the Hermosa Valley Greenbelt. Once part of a railroad easement, this narrow 24 acre strip had long been the subject of heated controversy and pressure from various commercial interests. After years of litigation and wrangling, the city was poised to permit intensive retail and condominium development in the mid-1980s when a grassroots group spearheaded by activist Rosamond Fogg forced the matter to a vote. The City Council at the time was divided over whether the matter was of much importance but after an energetic and passionate campaign, the citizens found that the greenbelt was a vital recreational resource and mandated its preservation for the use and enjoyment of residents and visitors. This ballot initiative passed by almost 87%, the highest in California history. fact|date=July 2007 The public also substantiated this effort by taxing themselves millions of dollars in order to purchase the lands.fact|date=July 2007 As a result, the Hermosa Valley Greenbelt has the quality of a rural country lane, home to butterflies and many bird and animal species. At any time of day or night joggers and walkers enjoy its soft woodchip trails and graceful landscaping. The Greenbelt is also now part of the Federal network. RUDAT (an urban architectural planning group) found that Hermosa Beach, thanks in large part to the existence of the Greenbelt, was a "world class pedestrian city" as attested to by RUDAT member Jerry Compton in the public record at [http://www.hermosabch.org/departments/cityclerk/agenmin/cca07-08-03/minutes.html]

Other facilities:
* rink (South Park) - 4th and Valley Drive is frequently used for friendly pick-up games and league matches.
* (Cypress Park) - Two outdoor courts on 9th and Valley Drive
*/ (Cypress Park)- Lighted field with lights on 9th and Valley Drive behind the basketball and tennis courts
* - Lighted courts on 10th and Valley / Ardmore
* [http://www.socalskateparks.com/park/HermosaBeachSkateTrack Skateboarding Park] - Lighted park behind the Hermosa Beach Playhouse
* [http://www.hermosabch.org/about/history/lawnhist.html Lawn Bowling Club] is located next to Clark Building at 861 Valley Drive, Hermosa Beach. Open to the public and they furnish equipment and instruction to beginners. The club was founded in 1936, when Mayor John Clark obtained the approval of the City Council to install a green at his own expense. In 1958, a clubhouse was donated and in 1963 a second green was laid. In the 1960s, over 150 bowlers could be seen all dressed in white. When membership waned, the second green was lost to the basketball court. The club is informal and seeks new members.

Hermosa Beach has its own elementary school and middle school but high school students are served by either or where rankings are in the 80 to 90th percentiles. Hermosa Beach residents are zoned to [http://www.hbcsd.org/] for grades ( through 8).

In 2005, Hermosa Valley and Hermosa View schools were honored as National s, along with 33 California schools and less than 300 schools across the nation. The award was based on academic achievement. Hermosa schools are among the top 10% of schools in the state with students scoring at or above the 90% in the highest grade tested in reading and math. For the award, the Department of Education reviewed growth in scores over a three-year period.

Hermosa Beach also has a :
*, a with classes up to the eighth grade. Although it is a religious school, there is no convent so most classes are taught by lay persons. Religious studies and services are provided by Franciscan friars and priests.

The beautiful beach lifestyle comes at a price: according to public data from the "", real estate prices increased almost 20% per year between 1999 and 2005.fact|date=July 2007 Properties within short walking distance of the ocean routinely sell for well over US$1.5 million. Those with direct, unhindered views routinely ask in excess of $2 million. "" ranks communities in the area as some of the most expensive places to live in America. Homes located on The Strand frequently sell for $3–10 million. The home pictured to the right sold in 2003 for $8,100,000. The average 3-bed 2-bath home costs about $649 per square foot or $1,500,000 as of 2006.fact|date=July 2007

West of PCH single homes mix with apartments, some have sunset views. East of PCH, the hills rise into upper middle class neighborhoods of tract homes with custom touches. Since the 1980s gentrification has set in, and many single-family dwellings and apartment buildings have been razed for condominiums. Multiple housing units dominate slightly over single family homes.

* [http://www.hermosabch.org/about/calendar HermosaBeach.org] City of Hermosa Beach Event Calendar
* [http://www.fiestahermosa.com Fiesta Hermosa] Arts and crafts festival which has taken place for the last 35 years every Memorial Day and Labor Day weekend
* [http://www.lataco.com/taco/ironman-hermosa-beach Hermosa Ironman] Unofficial triathlon every July 4th, consisting of running a mile in the sand, paddling a mile on a surfboard, and downing a 6-pack of beer. Then keeping it down for 15 minutes.
* [http://www.avp.com AVP Hermosa Beach Open] Started in 1969 and typically in June. Attracts combinations of pros and near pros. It's best to know a local to get in.
* [http://www.hermosashorts.com Hermosa Beach Film Festival] Started in 2005 and typically in August. Short films from each year are chosen to be screened at the [http://www.hermosabeachplayhouse.com Hermosa Beach Playhouse]
* [http://www.surffestival.org International Surf Festival] Surfing, , Pier to Pier Events. Beginning of August
* [http://www.hennesseyspaddleboarding.com/2007/hpf.php Hennessey's Paddle Board Festival] U.S. Paddleboard Championships. Typically in July.
* Hermosa Beach Sunset Concert free concert series from bands who perform on the beach. Starts July 22 - Aug. 5 (3 Weeks)
* Every Friday from 12 noon to 4 pm, rain or shine. (Valley Drive between 8th and 10th Streets)
* Sand and Strand Run The second oldest standing run in the L.A. area. Unique is its course design, with 45% of the run on the Strand and 55% on the beach. February during low tide.
* - the South Bay's . Performances run June through August in a variety of venues in Los Angeles and Orange County. [http://www.shakespearebythesea.org Shakespeare by the Sea]
*The , a seminal venue, is located in Hermosa Beach.

In addition to the "", Hermosa Beach is served by local daily the "" and local weeklies the "" and the "".

Segments of the "" were filmed in Hermosa Beach (and more in neighboring Redondo Beach), not Newport Beach. This was necessary because of union rules that make it expensive to film outside of Los Angeles County.

In the late 1970s the rock band Black Flag emerged from Hermosa Beach, and played their first show at Valley Park. The infamous "church" profiled in "" was on Pier Avenue, though it has since been torn down.

Hermosa Beach has been the sister city of , since 1967.