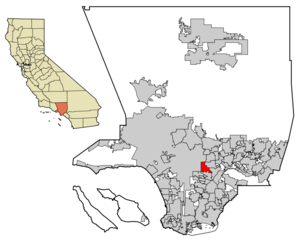 East Los Angeles is split between and [http://eastla.lacounty.info/edu_k12.htm] .

The only high school in the LAUSD section of East L.A. is James A. Garfield High School. There are current plans for the building of [http://www.laschools.org/project-status/one-project?project_number=56.40011 East Los Angeles High School #2] in the former Hammel Street Elementary School grounds (Hammel ES still exists at a new address). The high school is expected to open in 2009.

Adult Education programs from the Eastside Learning Center and East Los Angeles Occupational Center are intended and currently plan to be relocated at the East LA Star Hospital site. The [http://www.laschools.org/project-status/one-project?project_number=56.40070 East LA Star Adult Education] project is expected to be completed by 2011.

Oscar De La Hoya Animo High School ranks 6 out of the top 100 schools in the state of California according to the .

Despite multiple failed attempts in the past, residents are currently campaigning for cityhood for East Los Angeles. [http://www.cityhoodforeastla.org] Proponents of incorporation include California State Senator Gloria Romero and Congresswoman Grace Napolitano.

A Walk of Fame, similar to the one in Hollywood but with a probable focus on celebrities. The Latino Walk of Fame was inaugurated in June 1995 to honor outstanding leaders who have made historical and social contributions with a Sun Plaque on . Spaces have been created for over 380 plaques. Permanent granite plaques have been put in place for the first 20 honorees. The merchants’ association of East Los Angeles sponsors a Comprehensive Clean-Up Campaign that cleans the sidewalks and gutters daily and removes litter and trash. [http://images.google.com/imgres?imgurl=http://eastlachristmasparade.com/images/Latino_Walk_of_Fame.jpg&imgrefurl=http://eastlachristmasparade.com/news.php&h=644&w=800&sz=319&hl=en&start=3&usg=__b6nMmFS6KcdM2O677AYLg3sIpn0=&tbnid=2JMVPAYOj8ZFZM:&tbnh=115&tbnw=143&prev=/images%3Fq%3Deast%2Blos%2Bangeles%2Bwalk%2Bof%2Bfame%26gbv%3D2%26hl%3Den]

East L.A. was both the origin and destination of in both the song and the movie . At the end of the song (which was a parody of ), he parodies 's by singing the East L.A. streets Soto Street, Brooklyn Avenue, City Terrace, and Whittier Boulevard.

The area is also referenced in the song Wildside.