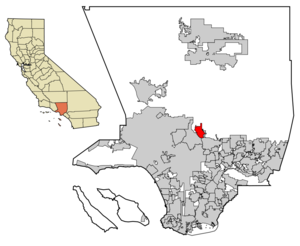 The name for La Cañada Flintridge comes from the Spanish word "cañada", meaning "gorge, ravine". In Spanish, this has a "()" and is pronounced|kaˈɲaða; the English pronunciation is IPAEng|kənˈjɑːdə. Roughly, it is pronounced "can yaddah" or "ken yaddah". "Flintridge" is simply pronounced as the two English words "flint" and "ridge", but does not refer to an outcropping ridge of flint (see history section).

The city is situated in the eastern end of the , sometimes referred to as the Crescenta-Cañada Valley. It is nestled between the and , on the north, and the San Rafael Hills, on the south. Most of the city drains southeastward toward to , but the western part of the city (generally west of Alta Canyada Road) drains southward toward via Verdugo Canyon. Both drainages join the north of downtown .

La Cañada Flintridge varies in from about 970 feet (295 meters) just below Devil's Gate Dam in the to about 2400 feet (730 meters) at the highest neighborhood, along the mountain front east of Pickens Canyon, at the upper end of Ocean View Blvd. The city limits extend into the and reach 3440 feet (1050 meters) along Mount Lukens Road, which follows the crest line well above the developed city.

The city is home to and NASA's .

The climate of La Cañada Flintridge is typical of a inland valley, with mild winters and hot summers. Spring often has hazy days, in contrast to the more persistently clear weather of fall. On average, the warmest month is August with high temperatures (F) in the low 90s and lows in the low 60s. December and January are the coolest months with typical highs in the high 60s (F) and lows in the mid-40s. Rainfall occurs mostly during winter, averaging about 22 inches annually. Rainfall is rare in summer. Temperature buffering effects of the ocean (22 miles, 35 km, away) are limited due to the city's location inland from the intervening and the and San Rafael Hills. Consequently, summers are generally hotter and winters are often cooler than in coastal parts of metropolitan if winds are calm or blowing gently offshore. Occasional strong offshore winds, known as , can be particularly hot in summer and fall as air from the deserts crosses the mountains and descends, thus warming further by heating. Summer and early fall temperatures are substantially cooler if airflow is persistently onshore. Occasionally during a cold winter storm, the upper elevations of the city may see trace amounts of snow. The small ski resorts , , and are located about 30 miles to the northeast.

During the Spanish era, the area was known as Rancho La Cañada, or the "Ranch of the Gorge".

Prior to the city's incorporation in 1976, the area consisted of two distinct communities, La Cañada and Flintridge (the latter named after developer and United States Senator ). Flintridge comprises the southern part of the city, covering the northern flank of the San Rafael Hills, but more generally including most areas south of Foothill Blvd. The eastern part of the city, even north of Foothill Blvd., was also originally considered Flintridge and is still home to the Flintridge Riding Club and . Reference to the entire city is often shortened to just 'La Cañada' but seldom to just 'Flintridge'. The full city name specifically does not have a hyphen in it, to illustrate unity between the communities that were once separately known as La Cañada and Flintridge.

La Cañada Flintridge had the longest city name in California with 18 letters until the year 2000, when the title was ceded to .

There were 6,823 households out of which 44.1% had children under the age of 18 living with them, 73.7% were married couples living together, 7.3% had a female householder with no husband present, and 16.6% were non-families. 14.4% of all households were made up of individuals and 8.0% had someone living alone who was 65 years of age or older. The average household size was 2.95 and the average family size was 3.27.

La Canada Flintridge has been home to many celebrities over the years, including , , his sister, , , , and her father, country singer who have since moved to Toluca Lake. Three of Walt Disney's top animators, , and settled here. Currently several prominent animators and TV news personalities make La Canada Flintridge their home. It is also a popular filming location, where movies such as "American Pie", "Date Movie", and "Old School" have been shot. La Canada is also the home of former pitcher .

The serves most of the city. Three public schools serve grades K-6: La Cañada Elementary, Palm Crest Elementary, and . The public high school, , which also serves as a middle school (grades 7-8), is a 2004 and is ranked as one of the top 100 high schools in the country. [ [http://www.usnews.com/articles/education/high-schools/2007/11/29/gold-medal-schools.html Gold Medal Schools - US News and World Report ] ] In addition, a small portion of the city is served by the , with La Cañada Flintridge students attending Mountain Avenue Elementary School (a 2005 ), Rosemont Middle School, (a 2005 ), and (a 2005 ). The city is also home to many private schools including the very highly regarded , , and .

La Cañada Flintridge is governed by the , which has five councilmembers, each elected to overlapping four-year terms. Each year, the selects one of its members to serve as and one to serve as Mayor Pro-Tem for terms of one year. The is aided by five commissions and two committees, each with its own area of responsibility. In addition, the appoints the , City Attorney, City Treasurer, and all members of its advisory bodies. It also serves as the governing board for the Public Improvement Corporation, the Redevelopment Agency, the LCF Local Financing Authority, and Sanitation Districts No. 28 and No. 34.

The City Council meets on the first and third Mondays of each month at 7:00 p.m. in the Council Chambers of the La Cañada Flintridge City Hall.

In the state legislature La Cañada Flintridge is located in the 21st Senate District, represented by Democrat , and in the 44th Assembly District, represented by Democrat . Federally, La Cañada Flintridge is located in , which has a Cook PVI of R +4 [cite web | title = Will Gerrymandered Districts Stem the Wave of Voter Unrest? | publisher = Campaign Legal Center Blog | url=http://www.clcblog.org/blog_item-85.html | accessdate = 2008-02-10] and is represented by Republican .

* La Cañada Flintridge is home to NASA's (JPL), which is the primary ' research and development center for the robotic exploration of the .
* The first course is located in the Hahamonga Watershed Park (formerly known as Oak Grove Park), right outside of La Cañada Flintridge, across the street from La Cañada High School.
*La Cañada hosts the largest collection of species in North America at : http://www.descansogardens.org/site/