Marrow (Sarah), is a Marvel Comics character, associated with the X-Men. She is a mutant whose bones grow out of her skin and can be removed from her body, providing her with potential knives and clubs as well as body armor.

As a child, Marrow was taken in by the Morlocks, a band of grotesque-looking mutants who hid in tunnels beneath New York City. As a young adult, she formed the violent splinter cell Gene Nation until, under the orders of Morlock leader Callisto, she joined the X-Men to redeem herself. She made progress controlling her powers and learning a moral code, but eventually fell in with the paramilitary group Weapon X.

As a child, Marrow first appeared in Cable #15 (September 1994) and was created by writer Jeph Loeb and artist David Brewer. However, Uncanny X-Men writer Scott Lobdell and artist Joe Madureira defined her powers and temperament.

She has shown herself to be a staunch team player (more-so with the X-Men than with either Gene Nation or Weapon X) who is prepared to risk her own life to protect those of her teammates. Despite her apparent disdain for humanity, she has revealed that she would like nothing more than to be able to fit in with them and be happy.

While there have been occasions that this has happened for her (in an art gallery with Colossus and immediately following her genetic redesign by Weapon X), they have never lasted long and only served to increase her anger and bitterness towards the world when they have been taken away from her.

As a child, Sarah was one of the underground-dwelling Morlocks. During the Mutant Massacre that devastated the Morlock community, she witnessed the mauling of Angel by the Marauders. She was also personally saved by Gambit, who was not yet known by the X-Men. Years later, most of the surviving Morlocks (including Sarah) were apparently killed by Mikhail Rasputin, although they were actually brought to another dimension. There, Mikhail had established a citadel for himself on the top of a massive hill. The Social Darwinist philosophy of "survival of the fittest" was the only thing which governed the society. If someone could reach the summit of the hill, they were considered "fit" and worthy of being part of Gene Nation.[volume & issue needed]

The former Morlock leader Callisto cared for Marrow during this period and displayed a maternal attitude towards the young mutant, although the two are not known to be biologically related. When her powers fully manifested she was forced to "up the hill", becoming more savage and killing her opponents to survive. When she managed to reach the top, Mikhail considered her fit to join his elite fighting team Gene Nation, which eventually became a terrorist group whose mission was to punish humans for their hatred towards mutants.[volume & issue needed]

In that harsh dimension, time passed quickly, and when Marrow and several other members of Gene Nation (of which she had become leader) returned to Earth, they discovered only a few years had passed during their absence. Marrow and the other members of Gene Nation began a homicidal terrorist campaign against surface-dwelling humans. After inconclusive battles with the X-Men and Generation X, Gene Nation was defeated by the X-Men. Marrow wired a time bomb to her own heart to force the X-Man Storm, who had herself led the Morlocks in the past, to either yield or kill her; Storm tore out Marrow's heart. However, due to Marrow's possession of two hearts to compensate for her random bone growth and superhuman regenerative abilities, she survived. Marrow eventually reunited with Callisto, and while they continued their terrorist activities, Callisto tried to hold back Marrow's more violent ways.[volume & issue needed]

After a battle with Cable, Marrow and Callisto returned to seclusion. When Callisto was injured by a Prime Sentinel during the events of Operation: Zero Tolerance, she directed Marrow to seek the aid of the X-Men. After teaming up with Iceman and Cecilia Reyes, Marrow went to the Xavier Institute. She joined the X-Men for a time, coming under the mentorship of Wolverine and flirting with her teammate Cannonball. When the team came under the attack of the Shadow King, Marrow managed to resist when the Shadow King tempted and tortured her in an attempt to gain her loyalty. She also helped Cannonball resist by viciously destroying the illusion of his abusive father. Cannonball was shaken by seeing Marrow slay the illusion of his parent.[volume & issue needed]

Marrow also participated in the fight against the returning N'Garai, extra-dimensional monsters who were loose on the grounds of the X-Mansion. She saved fellow X-Men Cecilia Reyes by impaling one of the creatures threatening her.[volume & issue needed]

Around this time Marrow would confront Spider-Man, because both were interested in investigating a unique type of kidnapping. Eyewitnesses reported the victims literally dragged into the sewers, something which of course interested Marrow, because of her Morlock heritage. Investigating the disappearances, they discovered them to be the work of the vampire-like being known as Hunger, who was swiftly defeated in a confrontation with Spider-Man.[volume & issue needed]

During an adventure in another dimension, Gambit, unable to control his powers, accidentally injured Marrow. She later traveled to the past with the X-Men, ending up on the Skrull homeworld a short time before the cosmic entity known as Galactus would destroy it. A medical device gave her more control over her powers, giving her a "prettier" appearance. The suspension-properties of a captured Skrull rescue ship allowed her and her fellow X-Men to make the journey back to earth in real time, without aging at all. Thus, for a while, two Marrows existed in the time stream, one on earth and one in space.[volume & issue needed]

The change of her features led to major softening of her personality, to the point where she reached out to Jubilee following Wolverine's disappearance in the lead up to "The Twelve" storyline. She also tried to cheer up returning X-Man Colossus in a scheme involving his artwork and her storytelling.[volume & issue needed]

Marrow left the X-Men during the six-month gap preceding the "X-Men Revolution", though her reasons for doing so are unclear.[volume & issue needed]

She was next seen brainwashed by S.H.I.E.L.D. under the alias of "Sarah Rushman" (an alias that had also been used by the Black Widow) used as a sleeper agent. Her mission was to terminate rogue Life Model Decoys. She had a split personality (mutant Marrow and human teenager Sarah) and had to be periodically injected to keep her implanted memory. With Spider-Man's help (he briefly dated her Sarah personality as Mary Jane was believed dead at this point), she freed herself from SHIELD's control by faking a suicide.[volume & issue needed]

Marrow was later recruited by the most recent incarnation of Weapon X, who again normalized her appearance and her powers. However, she eventually betrayed Weapon X upon discovering their anti-mutant nature. She used the remnants of Cable's Underground to reform the Gene Nation terrorist group and, as their leader, led several terrorist attacks on Weapon X until the rest of the group was slaughtered by Agent Zero. Agent Zero left her alone, not wanting her to become a martyr, but he warned her that he would come after her again after he had hunted down the remaining members of Gene Nation.[volume & issue needed] 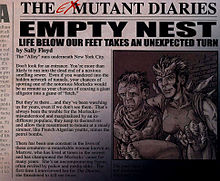 Marrow was next seen as a spokesman of a band of Morlocks after M-Day. She gave an interview to Sally Floyd for her ex-mutant diaries. Marrow remains underground to protect and give hope to the few mutants who remain and those who fear going to the surface to live normal lives.[volume & issue needed] Mike Marts, editor for the X-Men comic books, confirmed in an interview that although Sarah retains some of the physical attributes of her mutation, her actual mutant powers disappeared during Decimation.[1]

Marrow later turns up as a member of X-Cell, a terrorist group of former mutants believing that M-Day was caused by the U.S. government. As part of X-Cell, Marrow fought M and Siryn of X-Factor Investigations and after a turn of events in which she and Callisto learned the truth about who is responsible for M-Day, she turned against X-Cell supporter Quicksilver. Both heavily injured each other with a knife wound during the fight. Afterwards, she and Callisto managed to escape X-Factor and the government through the sewers.[volume & issue needed] It is unknown where Marrow is in the current stories.

In the Age of X alternate reality, Marrow again had her powers. Whether she retained them after being returned to Reality-616 with the X-Men and other mutants remains to be seen.

Marrow is a mutant with the ability to enhance the growth of her skeletal structure. Initially this was uncontrollable, but after enhancement by a Skrull medical facility, and later by Weapon X, she can mostly control this, despite each enhancement having partially failed over time. She utilizes this power in many ways, including the creation of knuckle guards, spears, and projectile spikes. She also possesses a healing factor and enhanced immune system, much in the same vein as Wolverine since every time a bone is ripped out a wound remains which closes itself soon after. She also possessed two hearts to compensate for her random bone growth, so when Storm ripped one out she was able to survive. It's possible that the first heart could have regrown due to the healing factor.

Her bones seem to be much more durable than normal; she had easily survived heavy hits in multiple areas of her body. For example, Flagsmasher hit her twice on the head with his mace without much damage, and Sabertooth likewise threw her against a wall without harm. She also jumped off the Brooklyn Bridge twice (something that would have resulted in death or at least crippling injuries) without any major damage, being able to walk away from the scene.

Like most mutants in X-Men who possess a healing factor, she is also more agile and stronger than the average woman in her age group and physical condition. Marrow has excellent tracking skills, spotting a hidden Prime Sentinel even a super soldier like Sabra hadn't noticed.

An often overlooked part of her mutation is her unusual skin and hair color, which she has possessed since birth. In almost all of her appearances, Marrow has pink hair. While she is sometimes shown with a normal Caucasian skin tone, Marrow is more often shown to have a vivid pink tone in her skin. During her time with Weapon X her hair and skin color was depicted as having a notable purple tone.

Marrow has lost her abilities since M-Day and is a "Rem," a person with visible remains of the lost mutation.

Marrow makes a brief appearance in the second issue of the 2005 X-Men: Age of Apocalypse limited series, as a member of the Morlocks, a group of mutants who were victims of Sinister's experiments at the Breeding Pens. How Marrow became an adult without being at The Hill is not explained.

In House of M Marrow appears as a member of the Red Guard whose mission is to capture or eliminate the Hood's gang in Santa Rico. Sarah helped Rogue in killing the Sandman only to be shot down by the Hood.[2]

In Ultimate X-Men, Marrow is proposed as a member of Emma Frost's Academy of Tomorrow, but is rejected by the President of the United States due to her appearance. She is later killed by Mister Sinister acting on orders from Apocalypse. 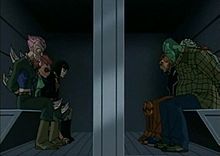 Marrow as seen in the opening credits of Wolverine and the X-Men.