Marvel vs. Capcom 2: New Age of Heroes (マーヴルVS.カプコン 2 ニューエイジ オブ ヒーローズ?) is a fighting game, developed and published by Capcom. It is the fourth game in the Marvel vs. Capcom series. With the fourth installment of this series, Capcom simplified the controls to make the gameplay more accessible for casual players. The button configuration was trimmed down to 4 main buttons and 2 assist buttons. The game also features a different air-combo system and 3 on 3 tag, compared to the 2 on 2 tag from previous games in the series.

The original arcade release of Marvel vs. Capcom 2 is the only game in the series to use the NAOMI arcade platform. Though the character artwork feature traditional 2D animated sprites, the fighting arena (background), the Abyss' sphere, and many effects animations are 3D polygon based.

This is the first and only Marvel vs. Capcom game without character-specific endings, as one will get the same ending regardless of the characters one uses or how quickly one defeats the final opponent.

When the earth and everything on it begins to die, Ruby Heart traces the source to an evil being known as Abyss, the Armor of Erosion. She summons the greatest heroes to her airship to find the being. Ultimately, its source of power is revealed to be a mysterious black metal ball within its center. The ending suggests that the sphere may be worthless now, given the massive crack in it; Ruby Heart holds it in her hand and regards it briefly before throwing it over her back into the water, letting it sink to the bottom.

Players select three fighters from the roster of Marvel and Capcom characters and fight one-on-one until one of the teams have no remaining players or time runs out. If each player has at least one character remaining when the timer runs out, the player with the highest total health amongst their remaining characters wins. Each character has at least one super combo and the entire team shares a single super meter. The characters can draw on this (at a minimum cost of one level) to perform their super combos or other special super moves. Up to five levels of the super meter can now be stored during a fight. Players can tag out their characters at any time, switching control to another character while inactive characters can gradually recover some health.

Control is similar to the previous Vs. games, which itself derives from the Street Fighter games, except that the screen is now wider. The major difference is that instead of three punch/kick attack strength, there are only two, with the last two buttons being replaced by assist buttons. Most often, a weak attack can chain two different hits. The second is a medium attack which was featured in the previous games. The only freestanding medium attacks are those that are air combo starters as well as one of Storm's special moves.

The player can also call in an offscreen character to do a selected special move by pressing the corresponding assist button. Each character has three assist types which cause them to execute different special moves (or in some cases, a regular move); this is chosen before the match. The player can call an assist at any time, except during a super jump, while blocking, or when executing special or super moves, and the assist character is vulnerable to attack or even knock out. The characters also receive double damage than normal when attacked during an assist, but will be able to recover all the health lost for as long as they remain unplayed.

Marvel vs. Capcom 2 introduces the ability to force an opponent's teammate into the fight with a move commonly called a "snapback", which requires one level of the super meter to execute. The character will flash for a moment and do a normal attack which will knock the opponent out of the playing field if it's not blocked. If successful, the current character will be knocked out of play for a short period of time and the next available partner will enter the fight on their behalf. If the move connects with both the active and an assist character, it introduces the possibility of the assist character being knocked out without the opponent being able to defend him/her.

Several original characters were also added to the Capcom side. These include Ruby Heart (ルビィハート?), a French pirate who is the main character of the game, SonSon (ソンソン?), the granddaughter of the SonSon from the Capcom title of the same name, and Amingo, a cactus-like being who is on a search for an evil wind that is sweeping across his land. The game's final boss, Abyss, is also a new character created specifically for the game. There are a total of 56 characters to choose from.

The arcade version features an "experience" system which unlocks hidden characters after a certain number of experience points are earned. This system was removed in the console versions in favor of the "Secret Factor" menu, where the player can buy hidden characters, backgrounds, and artworks using points that earned through normal play. In the Xbox 360 and PlayStation 3 version, all characters are unlocked from the start.[9]

The Xbox 360 and PlayStation 3 versions of the game is based on the Dreamcast version and features Online Multiplayer, using the online system from Super Street Fighter II Turbo HD Remix, as well as widescreen support. It also features an optional graphics filter, using 2x or 3x bilinear filtering for smoother or crisper graphics.[10] These versions also allow music stored on the console to be played, replacing the normal BGM. Capcom will be releasing a hip-hop mixtape on their websites around the release of the game, and are said to be currently exploring options of distributing it through the respective console's services.[11] 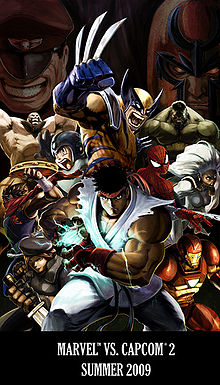 There are 56 playable characters, 28 from Marvel, and 28 from Capcom.

From X-Men: Children of the Atom

From X-Men vs. Street Fighter

From Marvel vs. Capcom

Marvel vs. Capcom 2 was first ported to the Dreamcast in 2000, and later to the PlayStation 2 in 2002 and the Xbox in 2003. The PlayStation 2 and Xbox ports of this game saw a limited print run due to Capcom losing the Marvel license. While these versions are merely uncommon, high demand has caused their prices to skyrocket both in stores and online. The Dreamcast version is considered to be the most faithful conversion of the home console ports, likely due to the similarity between the Dreamcast and NAOMI arcade hardware; it also happens to be the easiest and cheapest version to find, due to the larger amount of games produced. Although the Xbox version is on the backward compatibility list for the Xbox 360, it suffers from slow down, an inconsistent frame rate, and broken character sprites and backgrounds when played on the 360.[citation needed]

Changes for the PS3 and Xbox 360 versions include three different filters for sprites, Smooth, Crisp, and Classic. The game can also be displayed in widescreen format, though gameplay has not been changed, and is still restricted to the standard square playable area. Since the game was originally designed with a 4:3 ratio in mind, some of the sprites are cut off in the widescreen format. The opening 'attract' screen has been removed, and the menus have been updated. There are multiplayer lobbies, with online play, as well as the ability to spectate matches while waiting to play. There is no longer a process for unlocking characters, their colors, or extra stages, as they are all available from the start. Several characters on the selection screen are also moved to slightly different locations. In addition, in Xbox 360 and PS3 versions, the "Dash" move can no longer be set as one button but must be done manually making combinations with certain characters significantly more difficult than in older versions.

The game was highly anticipated upon its release and achieved criticial acclaim due to its graphics, fast action, storyline, and enormous cast. The game scored and 8.8 on ign, a 91.1 on Metacritic, and has frequently been called one of the best fighting games ever by Gametrailers, particularly by the Screwattack staff. The only complaints seemed to be the ability to stack teams as well as the jazz soundtrack, but many reviewers managed to overlook it due to the game's impressive achievements.